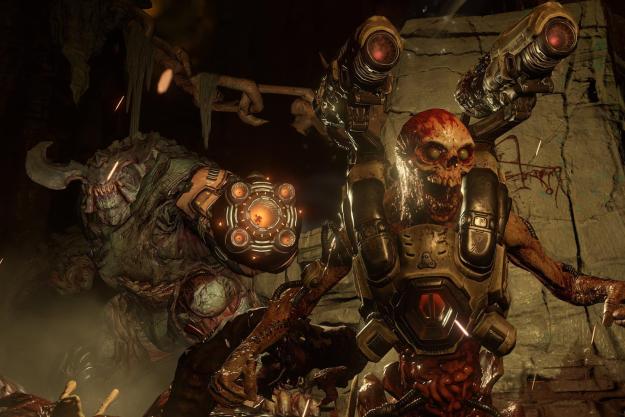 “Doom is a brilliant homage to the spirit, and hellish gore, of old PC shooters.”

It’s hard to exactly classify the 2016 version of Doom. The game shares narrative elements with its predecessors, so it isn’t a reboot, but it doesn’t directly build on the mechanics or story of Doom 3, so it wouldn’t be fair to call it a direct sequel, either.

When it was announced two years ago, developer Id Software revealed the game would not be called “Doom 4,” as the press had inferred in process stories and rumor round-ups, but simply Doom. After more than a decade and a full-blown revolution within the genre it helped create, the title change was a rightful acknowledgement that Doom is a historic series, but has not been part of the conversation for a while.

Rather than jump back in with a demon-skinned linear shooting gallery, the new Doom straps modern gameplay systems on to the classic run-and-gun arena shooting of its youth. It is fast. It is bloody. It is brutal. It may, in fact, be better at recreating the sensations you felt playing the original than going back to the classic. However, what begins as a refreshing slice of a bygone era eventually drags out into a repetitive slog. Doom is a brilliant homage to a classic, but falls short of achieving something new.

Doom’s single-player campaign puts players back in the shoes of the un-named space marine. He wakes up on a lab table, demons at his throat. After establishing he’s on Mars, the goal quickly becomes clear: Kill all the demons and close the portal that’s letting them cross over from hell. Simple enough, right?

Doom’s narrative is a façade — a means of disguising the game’s simple structure as a grand adventure. As the story unfolds, it offers just enough background to keep gaming’s modern, lore-hungry audience from scratching its collective head. (In the future, energy from Hell harvested on Mars powers the Earth.) There are a few characters as well, though they mostly exist to deliver exposition and/or personify key objectives. If you try to think about them too hard, you’ll lose interest.

Once you strip away the story, the game sticks to simple structure of its original entries. Players work their way through numbered levels, which offer a series of wave-based gunfights against increasingly large and difficult cadres of hellspawn. These arenas are set apart with hallways, and disguised by sub-objectives: For example, you will be sent off looking for a blue key so you can open the blue door. While the in-between sections often feature platforming or the occasional light gunfight, for pacing’s sake, the majority of your time is spent locked in rooms of various shapes and sizes, running around killing things.

Luckily, that core gameplay — running around at breakneck speed, dodging, and shooting demons so they can’t shoot you — is extremely satisfying. There is a frenetic energy that builds up in the arena: The game rewards you for aggressive tactic, too. You get health (and save ammo) for finishing demons off with “glory kills,” gory context-sensitive kill animations triggered by using a melee attack on weakened enemies. Running directly at an enemy, blasting it with your shotgun, then taking it down with a glory kill without missing a beat is enough to trigger a jolt of real-life adrenaline, even against weak opponents. And you’re going to do that dozens of times in every level.

The guns are standard first-person shooter fare, and include an assault rifle, rocket launcher, and not one, but two shotguns. You can also modify weapons by finding secret items and upgrade them using tokens earned through combat and completing skill-based optional objectives. The mods allow you to choose between two types of secondary fire. With the rocket launcher, for example, you can detonate a missile early, or lock-on to an enemy and fire a barrage of rockets. Between the guns and the mods, which can be switched on the fly, there’s enough variation to ensure that shooting things never stops being fun.

In classic Doom form, Health, armor, ammo, and other power-ups are liberally strewn about, but the enemies are dense enough to make collecting and managing your resources a nerve-wracking concern. Like the weapon mods, there are hidden collectibles that permanently allow you to carry more health, armor, and ammo, but you never become so powerful that you won’t need to manage your resources. By the time you reach the later levels, you will routinely run of ammo for many of the 10-or-so guns in your arsenal.

Good until it’s not

Every player will reach a point in the Doom campaign where the game feels like it hits its stride. Every encounter will push you past your comfort zone for just long enough that you breath a heavy sigh of relief when you’ve cleared it. Unfortunately, no matter when that point comes for you, the game will continue to draw out its challenges with more enemies and longer fights, leaving you frustrated more than satisfied.

Blasting an enemy with your shotgun, then taking it down with a glory kill is extremely satisfying.

Now, I recognize that everyone has a unique skill level and threshold for challenge, so arguing that a “game is too hard” isn’t exactly fair: Rather, it’s the nature of how the game ratchets up that challenge. As the fights get longer, the magic feeling of surviving gives way to exhaustion and, before too long, boredom. Coming at a battle from the wrong angle can feel like slamming your head against wall.

Doom’s unnecessary obsession with making players struggle also breeds its lowest moment, a trio of late-game boss battles. After hours and hours of chaotically running through dozens of enemies, striking at will, memorizing boss patterns feels like torture.

Visually, Doom’s aesthetic is brutal and blood-soaked from start to finish. An early level, for example signals that the combat to come will get more challenging, with a hallway covered in a crimson sludge made of blood and human viscera. That gore is disconcerting at first, but you’ll quickly grow numb to it. Aside from a few human characters and the occasional video diary, you rarely see (or think about) people in Doom. As a result, much of its implied violence lacks impact.

Wait, so it’s also a ‘Quake’ reboot too?

Doom applies the same high-speed shooting to its multiplayer, which similarly captures the speed and madness of early multiplayer shooters, such as developer id Software’s Quake series. As we discussed in our hands-on with April’s multiplayer beta, the gameplay is more frantic than your standard Call of Duty-inspired FPS. Using an expanded arsenal, which includes a gun that charges while you run, the running and shooting feels even faster in multiplayer, where a split-second and mean the difference between winning and losing.

That extra fast pace, of both moving and killing, lends itself better than most to random pick-up games and other “alone, but together” scenarios, but much of the gameplay still closely resembles most other shooters. While Quake and Unreal Tournament fans may see this as a return to form, COD players looking for their next “Team Deathmatch” game may fall in and out of love with it in short order.

Of the six multiplayer modes, two in particular stand out. “Warzone,” a variation on King of The Hill where the point of control moves along a set path, and “Freeze Tag,” an adaptation of the playground game where teams of six fight, but players freeze, instead of die. The first team to get completely frozen loses. While “team deathmatch” rounds tend to drag on in Doom — many of the levels are a little too large for 6-on-6 — these modes offer a single point of focus, and encourage players to think of new, strategic ways, that keep the gameplay fresh, without slowing things down. “Freeze Tag,” in particular, feels like a truly original new idea, which is an achievement.

The game also features SnapMap, a simple, but deep platform for making and sharing both single- and multiplayer levels. The editor, which lets players “snap” easily snap pre-fabricated rooms together, is easy to use, but offers the kind of depth that will take time to master. For single-player levels, you can set up gated doors, and give enemies pre-combat AI. For multiplayer, you can set the path for the “Warzone” hill, and other special points. Level creators may have a tough time making their levels stand out aesthetically, but there is enough depth to make an interesting level if you’re willing to put the time in.

Doom makes the gameplay of a 23-year-old video game feel new in 2016, which may be the greatest achievement of a video game this year. However, a great game finds new and interesting ways to enhance its strengths and mitigate its flaws. Doom does the former flawlessly, but outside of multiplayer, it ignores the latter. Doom‘s single player has convinced us that we can have too much a good thing — even on a handheld like the Nintendo Switch — and especially when it comes wrapped in screams and chunks of bloody demon flesh. Luckily, those multiplayer and map editing modes ease the pain of its main campaign.

Doom’s fast-paced, arcade-style action is unique among modern first-person shooters. You won’t find anything else like it on store shelves.

The campaign mode can be beaten in about 12 hours, while multiplayer and SnapMap (not available on Switch) can extend your playtime exponentially.

Yes. If you’re sick of the super-serious stories and plodding pace of shooter franchises like Call of Duty and Battlefield, Doom is just what you’re looking for.

Doom was reviewed with using a retail code for the Xbox One version of the game provided by the publisher.

Marvel Snap Battle Mode: How to play Marvel Snap with friends
Fire Emblem Engage bond levels: how to get max Bond Levels fast
Warzone 2.0 Season 2: release date, Ashika Island map, and Resurgence mode
The best PS5 controllers for 2023
The best upcoming PS5 games: 2023 and beyond
The best upcoming PC games: 2023 and beyond
Here’s what E3 2023 could look like without Sony, Nintendo, and Microsoft
Marvel Snap’s Friendly Battles set a new bar for its post-launch support
WWE 2K23 improves the wrestling sim with subtle tweaks and a bit of chaos
Meta Quest Pro VR headset is $400 off (and save on Meta Quest 2)
How to change classes in Fire Emblem Engage
Fortnite: How to collect Dragon Balls on Adventure Island
How to get all Emblems in Fire Emblem Engage