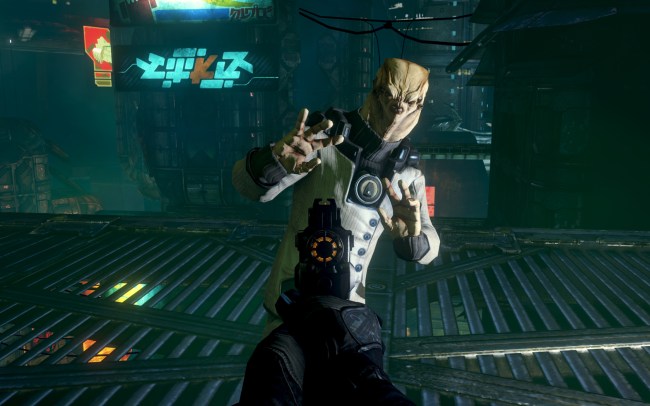 A good trailer can take you a long way, but a good trailer that is backed up by amazing graphics and enticing gameplay can make a game a household name. Bethesda’s upcoming Prey 2 has all of the above.

Last week when the trailer for the long awaited–or perhaps long forgotten–sequel was released, it caught people off guard. It has been five years and two publishers since the original, so the game had been written off by most. And why not, the original (although a solid early title for the 360) wasn’t exactly legendary. But the trailer was fairly jaw-dropping, and turned enough heads to make it a game worth checking out. Bethesda let us do just that at E3, which is almost a shame, because now we are forced to wait until next year to play what may turn out to be one of the best games of 2012.

Although the game is in pre-alpha, and despite the fact that it is running a modified id Tech 4 engine rather than the id Tech 5 that is powering RAGE, the graphics look amazing. The game takes place in the alien planet of Exodus, a high tech civilization with a run down, almost slum-like flavor. The detail on Exodus gives it the feel of a real place, with dirt, grime, advertisements and citizens wandering around the open world. Prey 2 is mostly a sandbox game, so you will get the chance to explore the alien planet as you hunt down bounties for cash.

This time out the protagonist of the game is Killian Samuels, a U.S. Marshall who was on board an airplane that was abducted by the alien Sphere, the device/space station from the first game that travelled the galaxy looking for specimens. Several years have passed since his abduction, but Samuels is missing huge chunks of his memories including how he got to the planet Exodus, and what happened to him after the abduction. He does, however, remember how to capture people, and so using high tech weaponry he becomes a bounty hunter.

The former hero of the series, Tommy Tawodi turns up, and he and Samuels know each other from the time that the Marshall can’t remember. While he tries to piece together his past, Samuels continues to go after bounties, which is a good thing for us, the gamers, because the game has a lot of potential as you hunt down all manner of aliens.

The overall plot will continue throughout the game, but the path you take as you learn about your past is up to you. You will be offered missions that you can take or pass, and the level of difficulty on the bounty is your choice. If you want to go for the high dollar target, you can, but it won’t be easy.

Choice is a major component to Pray 2, and your actions will have ramifications as you progress through the game. When you capture a bounty, you may be offered a bribe by the target to let him/her/it go. You can accept and possibly receive a higher price than you would have otherwise received, but the people that hired you may not take kindly to it. You may also need to get information from a particular person/alien-thing, and how you treat them could come back to haunt you. If you decide to scare them a bit like by, oh say, shooting several people dead around them, they may not be as friendly to you later in the game then if you had just bribed them. Granted, the violent option is probably way more fun, but the choice is yours.

The sense of freedom through choice is also present in the bounty missions themselves. There is no right way to proceed, so you can do the job however you like. If you prefer the stealth route, you can do that for the most part. If you prefer to get the most out of your shoulder mounted heat seeking rockets, go for it. And besides just the ability to use incredibly cool alien weapons, sometimes those weapons will be the right tool for the job, other times it may take some experimenting to find a way to trap your prey that works.

The demo Bethesda showed was sadly brief, but the potential of this game is huge, and everyone knew it. Of all the games displayed at E3 this week, Prey 2 was one of the most talked about. Not bad for a game that most people didn’t know existed a month ago. Keep an eye out for Prey 2, and expect to hear a lot more about it before it is released for Pc, Ps3 and Xbox 360 next year.