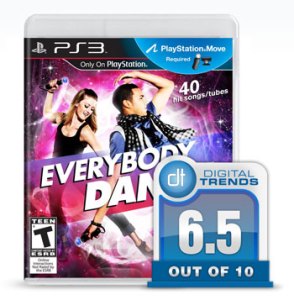 Sony must have felt that they were losing out in the getting people to dance department, so they’ve finally added to the crowded genre with a dancing game that utilizes the Playstation Move, with Everybody Dance. As with many games of the same ilk, it’s fun if you make it fun, but other than music it doesn’t really do anything better than any dance game on the Kinect.

But before we get to the dancing, there are some features worth noting. The options in the game are fairly sparse with only three immediate options. There’s the random dance which lets you choose songs, the workout option which turns a series of songs into an exercise routine complete with a calorie counter and the party mode which the game claims can host up to 20 people. Unfortunately, I only have two move controllers so I didn’t get a chance to check out how it handles that many people, however, having just two people trying to dance it out was a little harsh. You need quite a bit of space for it to really work well.

There is also an option to create your own dance moves. This involves the Eye camera recording you as you make up moves to one of the songs. Then you can practice by watching yourself dance. It’s a little weird and it doesn’t work well if you don’t have a lot of light in the room–the Eye’s recording capabilities are kind of poor.

Getting Your Groove On

On to the dancing, and…well, it’s okay. The biggest problem is that there is no real incentive to use your whole body to dance. The Move tracks to the ball on the controller not your whole body, like the Kinect does. If you want, you can move your feet but you don’t have to in order to win big. You could probably play the game just sitting on the couch and waving your arm in a vaguely similar fashion to what the game wants you to do.

The set up is somewhat confusing as well. On the screen the music video for the song plays in one corner – occassionally switching to video of yourself dancing to the song. A dancer does the movements and pictographs showing what move you’re supposed to do scroll in from the right.

One problem is that when you first start the game you’ll look at the pictographs for clues as to how to dance. This works well enough but it means that you’ll fail the song more often than not. It’s actually better to just mimic what the dancer is doing instead of following the icons.

However, the biggest problem is that it’s hard to tell if you’re really doing the dance moves correctly. The Playstation Move tracks the controller fairly well but as mentioned you don’t really have to move all that much to make it work. At times I was purposely doing somewhat wrong movements but the game was giving me “Flawless” scores. It’s hard to improve as a dancer when you can’t even tell if you’re doing it right.

There are three levels of difficulty: Beginner, Intermediate, and Professional. The only difference that I noticed was that the moves come faster, but there aren’t really any more challenging moves as you increase levels. It’s just as fun – or not – to dance on Beginner as it is to go up to Pro.

The catalog for Everybody Dance revolves around a mix of recent and classic pop music, and there are about 40 tracks with a wide variety. Some of the fun ones include Diana Ross’ “Upside Down” and Outkast’s “The Way You Move.” There are some odd choices mixed in with it though, like Sublime’s “Santeria” which has the weirdest dance moves and is way too slow for this kind of game. As expected, new tracks are available via the PlayStation Network.

Everybody Dance is fun if you make it fun. Unfortunately, it’s the only option for those with a Playstation. If you’d really like to get your groove on take a dance class or grab a Kinect. You won’t learn any new dance moves – save through osmosis – and your form won’t receive any perfecting. The music selection does provide some great choices though, along with a few odd ones.

There’s silly fun to be had swinging your arms around if you want to make it fun, but beyond that there’s no real incentive for you to try Everybody Dance.

How to turn off a PS5

How to put your PS5 in Rest Mode