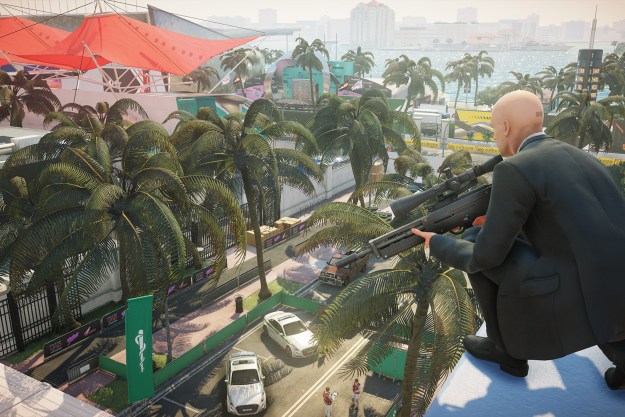 “Hitman 2 takes everything you love from the series and expands on it in every way.”

Hitman 2 takes everything you love from IO Interactive’s take on the series and expands on it in almost every possible way. Abandoning the episodic format from the previous game, we’re introduced to a complete story from the very beginning. This new approach, in addition to the online multiplayer, sniper assassin mode, and hundreds of challenges available, are sure to excite your inner assassin. It’s an overwhelming but fulfilling experience that makes for one of the best entries in the stealth genre to date.

It’s in the details

Hitman 2’s story begins with 47 searching for intel on the Shadow Client. It follows the events of 2016’s Hitman and brings with it six new story missions that reveal clues about the current state of the International Contract Agency (ICA) and its targets. Between levels and through cutscenes, we get to watch 47’s hidden past reveal itself, leading to a few unsuspecting twists.

There’s one word that sums up Hitman 2 and it’s complex. Each new locale, from Miami to Mumbai, impresses with an ever-increasing scale, boasting massive structures, interactive stores, ornate villages, maze-like cities with breathtaking architecture, and even secret hubs underground. Each location has its own unique charm bringing out the personality of each target.

When it comes to killing, Hitman 2 challenges you to get creative. Assassinating targets require taking on delightfully outlandish roles in risky situations to complete missions. From impersonating a mechanic that sabotages a racing car to posing as a smuggler that infiltrates a massive drug lab, the variety of perilous situations you’ll find yourself in is only supplemented by the number of ways you can approach them.

Hitman 2 does an excellent job of letting you choose between assisted stories or the full 47 experience (diving in blindly without a disguise). I opted for the former, slowly getting to know the maps and uncovering the stories.

Finding the most efficient way to complete your objective quickly becomes addictive in Hitman 2.

These stories often appear during conversations with NPCs as they slip you information on an international celebrity on their way to meet a target or a poorly built statue that can be used as a weapon. Some NPCs are readily available while others have to be discovered, but they all serve as a wonderful guide, also delivering on some of the game’s best moments.

One of our favorite missions involved working alongside another unknowing assassin, leading our target to the right spot and tasking them do the dirty work.

It’s all about stealth and being a chameleon is the best feature in the game. The possibilities are limitless. Changing identities in just a matter of seconds never gets old and neither does the vast selection of tools available. From more traditional weapons such as pistols, machine guns and bombs, to rudimentary options like fishes, rat poison and even muffins, the weapons you’ll use in combat are only meant to compliment your stealth, allowing you to kill or perform a non-lethal attack on targets without being caught. And of course, the suitcase has returned in Hitman 2, an accessory that lets you hide weapons in specific parts of the map, including 47’s trusty sniper rifle.

Even with all the weapons and tools in the world at your disposal, Hitman 2 demands accuracy. It’s a game with a learning curve. Finding the most efficient way to complete your objective quickly becomes addictive and it all comes down to experimentation. Following each mission, players can review their results. These include what you have accomplished during a level as well as all the different things you could have done instead. It invites players to try multiple runs and further explore levels.

Right from the very first moments, Hitman 2 is a massive experience.

In our case, that involved lots of reloading previous save files until a mission was perfectly executed with no traces of our presence or unnecessary casualties left behind. Hitman 2 rewards meticulousness with new equipment, items, disguises, and stories, all wrapped up in an online rank that levels up the more you play and complete additional tasks.

A long road ahead

Aside from main story missions, Hitman 2 introduces Ghost Mode, an online multiplayer where you compete against another assassin, taking down a number of targets in a limited amount of time. You cannot interact with other players and instead, see them as ghosts, as the name implies. It requires a more immediate reaction, and the best way to tackle this is to prepare yourself beforehand in single player, getting to know the maps in detail. Keep in mind that IO Interactive considers the current state of Ghost Mode a beta, and it will likely go under changes based on community feedback.

And that’s not all for multiplayer. Sniper Challenge mode is integrated in Hitman 2 and offers both single-player and co-op modes. In this mode, 47 can only use a sniper rifle while overlooking the map and must find the most efficient way to take down a number of targets. There is only one map available at this time and in this mission, targets include bodyguards as well.

Hitman 2 includes an expansion pack with additional content planned for the future. There’s also the possibility of returning to the levels of its predecessor by purchasing the Legacy Pack which is free for Season 1 owners. It includes improved graphics and all of the quality of life improvements and additions of the sequel. All of this, along with Elusive Targets and free content planned, ensures that there’s plans for a long roadmap ahead. And luckily, there aren’t any microtransactions in sight.

Right from the very first moments, Hitman 2 is a massive experience. Landscapes are gorgeous playgrounds for chasing objectives and the variety of tools and weapons at your disposal feels endless.  Completing all the story missions is just scraping the surface of Hitman 2’s potential as it demands more finesse in your following visits, and shows promise for the future with its current roadmap. Hitman 2 takes everything we enjoyed from Hitman and improves on it, bringing forth the ultimate assassination game.

No. Hitman 2 is a unique and enjoyable entry, both to the stealth genre and the series.

Our playthrough took about 10 hours but a completionist run along with additional modes and the upcoming Elusive Targets guarantees dozens of hours with ease.

If you’re not a fan of replaying levels, the story mode might fall short for you. But even if you’re not familiar with the series, Hitman 2 is an experience worth diving