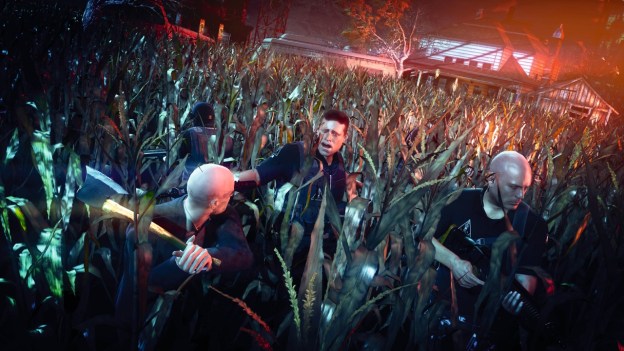 Earlier this week, IO Interactive and Square Enix’s Hitman: Absolution was released. It comes in the shadow of the much hyped and oft-discussed Wii U though, threatening to diminish the shine of what is certainly one of the better games of the year. Check out our full review here.

Hitman: Absolution is a stealth-based third-person action game that faces stiff competition this Holiday season. But it has a few tricks that make it stand above even some of the most beloved third-person titles available.

The game is filled with an incredible degree of personal choice, and populated by what feels like a real world’s worth of non playable characters to help you both immerse yourself in the game world, as well as expand the options at your disposal. From a gameplay point of view, it is remarkable. From a technical standpoint, it is astounding.

We caught up with Tore Blystad, director of Hitman: Absolution, and talked a bit about what makes this game so noteworthy, and how technology like this will improve the gaming experience.

There are plenty of third-person games on the market, but what is it about Hitman: Absolution that makes it stand out?

I do think the single player replayability of it. When you understand the depth of the gameplay, and that playing through every section of the game is something that will be – you can go back to a section and you can play through in a completely different way and have a very different experience with it.

And of course, playing contracts against your friend is something that will add a social aspect to the game that at least Hitman games have never had in the past, except you could say, on the forums, kind of outside the game world. [We’re] now bringing it inside the game world.

When you personally are playing a game, what is it that you appreciate most about it?

That depends a lot on which type of game it is. Playing on a console, it is looking at how they do story, how they do drama within the game and give freedom of choice to the player. This is something that is very central to us at least.

I guess you can say there’s a very strong trend to do these very story based linear games, because it’s very easy to control your story when you do a linear kind of gameplay where you can’t do anything else but what you’re told to do. It’s challenging because it’s kind of like an interactive movie, but it’s not challenging in gameplay terms. That’s what we’re trying to do with Hitman, to see how can we do drama in this library [an early level in the game] for instance, without controlling what the player is actually doing.

The Hitman games have always given you a tasks, but then set them in relatively open world environments, fully populated by people. So from a technical point of view, how much detail was spent on characters that may only wonder into the player’s field for seconds, if that?

We spent a lot of time with that. They might be out of screen in [my] playthough, but maybe in your playthrough they will play a central part in it because you choose to go a different direction or play it a different way. The AI to us is basically the shining star of the game. I think we have about 2,000 pages of script for them, the dialogue. That’s the biggest thing we ever did at least, we have 60 voice actors, or something like that, really giving a lot of depth to every single character of the game. So that’s why we are very happy when people want to replay areas of the game because they can discover more of what the different characters can do.

I’m still – when I’m playing the game – finding out new things about different characters, like storylines I didn’t even know about that people have written into the game.

The open world games are something that has massively improved as the technology available has improved. So what do you think games are going to look like in 5 or 10 years?

The social part is just going to grow, and that’s what we see in games like ours. We also heard from GamesCom, many of the reporters were talking about others – we didn’t get to see anything, we were stuck in a room for a week. But they were saying a lot of games were having these social, asynchronous features, that are not necessarily a pure multiplayer mode, but you can connect with your friends. But because everyone is having less and less time, you can’t really decide with your friends any more, and go “ok, 8 o’clock, we’re going to play the game together and we’re going to sit down in our living rooms across the world” or wherever they are. And now because everybody has so many things to do, you might not have time for that anymore.

So having this asynchronous mode helps, because you can log in and see “ok my friends have all these different challenges for me” and you can play through them. While they may have done them 10 hours before, and you can send something to them when they go online again. So I think the social aspects in general will grow. I think technology wise things are moving pretty slow with the new consoles. I don’t know how much power they will have. If you compare it to, like, a kick ass PC today there’s still a lot of things you would want to do with technology that is still difficult.

I mean, we’re having trouble with our AI, because we can’t switch it off at any given time – it’s always running on any given character. Of course, that’s something we would like to evolve more, and everything is generated on the fly. These are things that I’m hoping to see more. Spore did some, but they are very weird creatures, so if you could do that on humanoids, and do text-to-speech, so you can kind of start generating “real,” synthetic characters. It might be 10 years off, who knows.

With that new technology, do you think games are going to move more towards a Hollywood style of spectacle gaming, or more towards games as art?

I think you’ll see both. You get these extremely huge titles that’s taking thousands of people literally years to produce, and then you have these indie titles coming out that are looking amazing. You know Dear Esther?

Yeah, there have been a lot of games made by small teams, games like Journey, that are incredible.

Yes, exactly! These are fantastic gaming experiences that are very personal and very powerful, and they might even have more, you could say pathos or personality than these mega games, because they’re made by so few people that really had their own vision about it.

I think it’s a great time to make games now because the diversity has never been bigger. There’s never been more platforms or more game developers. I mean, on the way here, the taxi driver’s son was a game developer working for Nintendo. I was like, wow, that’s awesome!

So do you enjoy working with the bigger teams, or would you like to try something smaller and more personal?

Well, it’s been pretty tough on this team. It’s been huge, and it’s a big challenge for us. There’s been times when I was like I just want to work with like five guys and do a little team, but there’s also the allure of doing something huge is very rewarding when everything comes together.

My bosses are all asking me the same question. I would still like to do a big game now, but if I could do both I would also do an iPad game or something like that on the side.