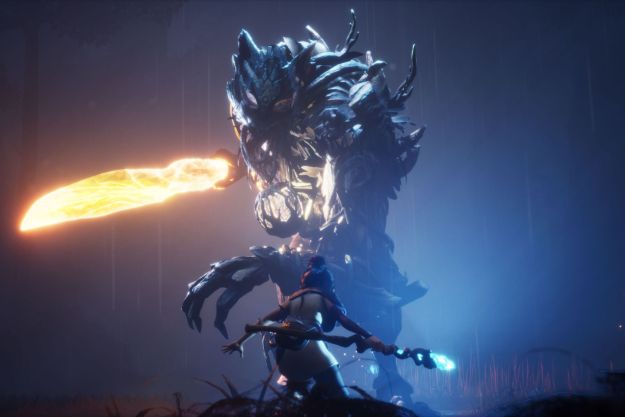 “Kena: Bridge of Spirits is as gorgeous and elegantly crafted as a big budget game, making it a statement debut for Ember Lab.”

On a surface glance, few would probably guess that Kena: Bridge of Spirits is a self-published, debut project from a small studio. The adventure game is about as polished as can be, with gorgeous visuals, cutscenes that rival (if not surpass) modern CG animated films, and iron-tight gameplay mechanics. If there was ever any doubt that the barrier between “indie game” and “AAA” has eroded over the years, here’s a game that shatters any remaining walls.

Developed by Ember Lab, Kena: Bridge of Spirits bursts onto PS4, PS5, and PC via the Epic Games Store with the confidence of a first-party Sony game. It pulls elements from Zelda, Uncharted, Dark Souls, and plenty more heavy hitters above its weight class to deliver a knockout blow to its genre. It’s no surprise that it’s gotten a massive spotlight during Sony’s State of Play streams and this year’s Tribeca Festival; this is the kind of statement debut that demands attention.

Kena: Bridge of Spirits is an exquisitely crafted adventure that fuses classic and modern game design concepts with ease. Whether it’s riffing on Pikmin with its inventive creature-controlling mechanics or serving up deceptively challenging battles, it excels at everything it does. That’s all topped off with a poignant, Miyazaki-like story told through deep worldbuilding and cinema-quality cutscenes.

The Legend of Kena

When it first debuted, Kena: Bridge of Spirits drew some early comparisons to The Legend of Zelda series. Those were certainly warranted, but it doesn’t paint a full picture of the game. It’s bursting with inspirations that build upon decades of video game history. The general framework feels timeless; Kena is a staff-wielding hero who sets out to find a mountain shrine in a poisoned world that’s been abandoned by everyone, except monsters.

Many of its structural beats are familiar, but in a warm, comforting way. Players tackle well-designed platforming sections, hunt down relics that take them to each corner of a sprawling map, and find a whole bunch of collectible secrets scattered in every nook and cranny. It’s a classic video game premise that is somehow nostalgic to every era, but each bit of it is shined up until it sparkles.

Exploring in Kena: Bridge of Spirits always feels satisfying, because each tool has a clear purpose that’s easy to keep track of.

Take exploration, for instance. Kena doesn’t have as many tools as Link, but each one is equally crucial to navigation. Her arrows allow her to zip onto flowers like a hookshot, she can scale walls a la Uncharted, and a mid-game spirit bomb magically rebuilds broken structures to create the game’s most clever platforming puzzles. Exploring in Kena: Bridge of Spirits always feels satisfying, because each tool has a clear purpose that’s easy to keep track of; there’s no mechanical fluff to slow the pace down.

Its most delightful idea comes from a surprising game, though: Pikmin. Kena can collect and control adorable black creatures called Rot, who swarm and squeak around her like Spirited Away’s soot sprites. The Rot infuse Kena’s traditional adventure systems with its most inventive ideas. They can lift objects to reveal collectibles, lug rocks around that create new platforms, or form into a water-like swarm that can break through thorny roadblocks. Every time I discovered a new interaction, I’d squeal with joy — both because I was delighted by how many creative ways the game could stretch a simple system and because they’re just so darn cute. They can even wear tiny cowboy hats!

Yes, I’m serious about that last part. Another vintage part of Kena’s DNA is its collect-a-thon setup. There’s a lot of optional items to find throughout the world, but each one is actually worth tracking down for different reasons. The Rot themselves serve as a clever, yet functional collectible, as the swarm levels up and gains new abilities when Kena finds enough creatures. There’s also a whole bunch of tiny hats that can be found via chests and combat challenges, and each Rot can be outfitted with a different one. That doesn’t have any gameplay implications, but it sure is a fun diversion.

That speaks to the core strength at play in Kena: it’s always playful. Every new tool, platforming puzzle, or buried treasure brings another delightful surprise that rewards anyone who’s willing to lose themselves in a digital adventure.

Don’t be fooled by the cute creatures and little hats, though: Kena gets deceptively tough. Combat is as important as exploration here, and as thoughtfully built too. At first, players only use a light and heavy staff attack to melee enemies. But the game does an excellent job of gradually ramping up what players can do. It’s a graceful complexity curve that naturally builds alongside the game’s difficulty.

Kena soon gains the ability to shoot arrows from her staff, bringing a ranged component into the mix. Bombs add another layer around the game’s halfway point, bringing some puzzle mechanics to battle. One stony boss can only be damaged once Kena uses bombs to expose its wooden skin underneath. Every item has a select few upgrades too, each of which feels useful and not just like a nice, but useless perk.

The Rot play an excellent supporting role in battles too. When Kena builds up enough resolve, she can deploy the Rot for a variety of purposes. They can swarm around an enemy to briefly distract them, heal Kena by blooming flowers around the battlefield, or even infuse with weapons to create powerful special attacks. Each time I had enough energy stored up, I’d find myself having to make decisions about how I’d command the Rot. Should I heal myself while my health is low, or fire off a Rot arrow to deal an extra chunk of damage? It’s a level of strategic depth that almost makes the Rot feel like an RPG magic system.

Shielding and evasion play a major role in battles too, giving the fights a manageable Dark Souls edge. Kena has a spirit bubble, which acts as a shield in battle. Block too many times and it’ll break, but activate it at the right moment and she’ll parry enemies, leaving them vulnerable for a few seconds. While my instinct was to avoid it at first, it quickly became crucial to my battle plan.

It’s a graceful complexity curve that naturally builds alongside the game’s difficulty.

It’s important to have a plan, because fights start to get serious towards the back half of the game. The challenge naturally crescendos with battles that feel tough, but achievable. While fights mostly feel fair, they do provide some of the game’s rare moments of frustration. Certain enemy attacks can go surprisingly far, making them a little difficult to read or avoid. Some creatures also seem to have the ability to turn anything they throw into a homing missile. I’d constantly feel like I’d cleanly dodge out of a rock’s path, only for it to turn into a curveball and beam me on the head.

Those moments are rare, though. More often than not, I felt totally in control in battle because I had a firm understanding of all my tools. By the penultimate boss, I’d find myself sticking a bomb onto an enemy, shooting it with a Rot-infused arrow to deal some extra ranged damage while detonating it, dashing forward to close the distance, activating my shield at the right time to counter an attack, and swinging my staff to quickly cut down its health bar. Kena gets players to that point at a steady pace, making sure they have enough time to fully grasp a tool’s potential before introducing a new idea that adds more depth.

Eat your heart out, Hollywood

Developer Ember Lab started out as an animation studio and that’s readily apparent. One of the first things players will notice when booting Kena up is that it features gorgeous visuals that don’t possibly seem like they could have come from a small, first-time game studio. Environments pop thanks to a rich color palette that juxtaposes the cool blues and greens of the natural world with neon-like splashes of red and burnt-out browns. Each little character comes to life with animation detail, including every single Rot.

The high production value is especially apparent in the game’s cutscenes, which genuinely look as though they’ve been pulled from a high-budget, CG animated film. It feels like Ember Lab is pushing video game animation to its limits here — which becomes clear as some of the game’s busier sequences tend to bump up against noticeable framerate stutters.

All those pretty images go to good use, as Kena’s real strong suit comes in the form of its story. The game plays like a classic Hayao Miyazaki film (think Princess Mononoke or Nausicaä of the Valley of the Wind), with Kena fighting to preserve nature’s beauty. She’s ultimately on a quest to reverse an environmental disaster that’s caused an entire village to flee. On her way to the shrine, she interacts with the spirits of those who were unable to stop it. The ghosts that linger around grieve for a once beautiful place, highlighting the personal pain that comes from a failure to protect the world around us.

The high production value is especially apparent in the game’s cutscenes, which genuinely look as though they’ve been pulled from a high-budget, CG animated film.

But Kena isn’t a story of gloom and doom. It pauses to provide empathy for those overwhelmed by pain, but still moves forward, offering hope for the future. The game hinges on moments of environmental catharsis where Kena uses the Rot to revert dead areas back into thriving, grassy plains. Watching gnarled wood and poisonous gas revert back to lush hills (an effect that seamlessly happens in-game thanks to next-gen tech) makes Kena: Bridge of Spirits into a true power fantasy. Not one where a grizzled soldier destroys everything in sight with a massive gun, but one where even the smallest person has the power to rebuild the world around them.

Things aren’t quite so easy in our own world, but Kena stands as a much-needed beacon of optimism for players young and old.

Kena: Bridge of Spirits is the finest adventure game released in years and a clear highlight of the latest console cycle. Both its exploration and combat components gradually build in complexity with tools that always have a clear purpose. That elegant mechanical design keeps the focus on the game’s impactful story, which tells an aching, but hopeful tale of environmental disaster. There are a lot of points of comparisons to be made when breaking it all down, but Kena: Bridge of Spirits blends every little influence together into its own gorgeous mix.

The Legend of Zelda: Breath of the Wild is the adventure game to beat, but Kena is the best option for PS5 owners at the moment.

The story takes around 10 hours to complete with some healthy collection. Finding everything will extend the playtime further, as will the Master difficulty mode that’s unlocked upon completion.

Yes. Forget Deathloop and Ratchet & Clank: Rift Apart: this is the defining console exclusive of the PS5’s debut year.