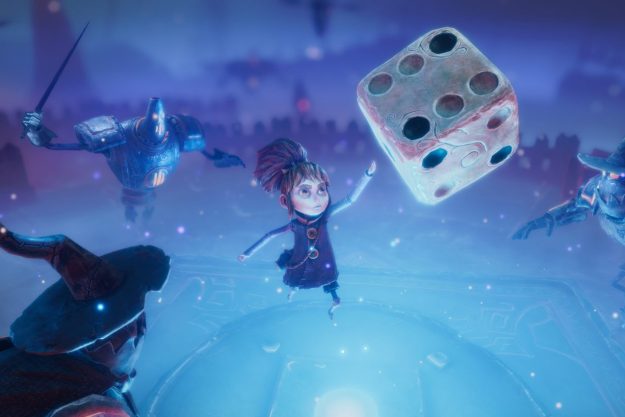 “Lost in Random is like a storybook come to life, but that isn't enough to carry it above its struggles.”

It’s late, it’s dark, and I’m lost. I run through the streets of Threedom, chasing after a ghost I’m not even sure is real. Along the way, strange, twisted creatures call out to me, advertising their wares and warning me against wandering too far. I shut them out as I keep running, determined to save my sister — and maybe put an end to Threedom’s eternal civil war while I’m at it. The entire time, a monster is whispering in my ear, reminding me that I have only until sundown or my quest will be all for naught.

This is the world of Lost in Random, the latest project from Swedish studio Zoink Games. Published by Thunderful Games under the EA Originals program, Lost in Random is an indie action-adventure game with a distinct Tim Burton-esque aesthetic. In the world of Random, citizens’ fates are decided by the roll of a six-sided die. A mad queen rules over the world’s six kingdoms, all of which have unique number-themed quirks. When children turn 12, the Queen rolls the die, and the number it lands on determines which kingdom they’re sent to. Main character Even was born to residents of Onecroft, the lowest and most unlucky of the kingdoms. When Even’s beloved sister, Odd, rolls a six on her birthday and is transported to live in the Queen’s palace, Even sets off on a quest to rescue her. Along the way, she meets Dicey, a sentient die with a surprising amount of power. Armed with Dicey and a deck of battle cards, Even sets off to save Odd.

Lost in Random is a lush, beautiful adventure through an interesting world populated with unique characters. At the same time, it’s also a tough action game with fairly limited resources and a heavy focus on dodge mechanics. The more I played, the more I got a sense that this wasn’t your average action-adventure game — instead, it’s actually a Soulslike in disguise, or a game that takes its combat cues from the infamously punishing Dark Souls series. Unfortunately, that revelation came with all of the frustration that Soulslikes tend to impart.

Places to go, people to meet

The best thing about Lost in Random is its world. Every environment is a treat for the eyes, from the strange teapot-shaped buildings of Onecroft to the majestically pink sunset of Threedom. Each area has its share of strange, unsettling characters, many of whom have a story to tell. Playing the game really made me feel as though I had stepped back into my childhood. Many of the designs are based on creatures that go bump in the night, the monsters under your bed that your storybooks warned you about.

The central quest is mysterious and interesting to the point where it consistently kept me engaged. Combined with strong voice acting and narration, the whole package is just creepy and endearing enough that I was always excited to see what I’d discover in each new kingdom. I especially loved the short areas that feature Odd, which are creative and mind-bending in the best way.

As fun as it is to hear every Random resident’s story, the dialogue gets a little tedious at times. Many of the characters are extremely long-winded, and they talk exceptionally slowly. I found myself mashing through dialogue after a while, desperate to simply get to the point. I also hit a few audio bugs that made dialogue skip or flat-out not play.

The whole package is just creepy and endearing enough that I was always excited to see what I’d discover in each new kingdom.

Despite that, the game’s writing is strong and every character feels unique. There are more dialogue choices than you’d expect, though they’re more for flavor and color than true decision-making. Even frequently has a variety of snarky responses at her disposal, and I enjoyed hearing characters’ responses to her snide comments.

The only downside about the environments is the difficulty in traversing them. Every street starts to look similar after a while, and the game’s map is mostly useless. (It desperately needs a “you are here” marker.) The angular nature of the combat arenas meant that I got caught on walls quite a bit in fights, which made it so that I couldn’t dodge enemies’ attacks. The camera also gets caught behind walls and structures a lot in these arenas, particularly if you toss Dicey near a wall.

Lost in Random‘s linear exploration and talking simulator segments are broken up by arena-style combat. After making it out of Onecroft and meeting Dicey, Even frequently finds herself in small, vaguely circular areas with a group of enemies to fight. In each battle, combat starts with a relative amount of powerlessness: Even must dodge enemy attacks and use her slingshot to dislodge crystals from enemies’ bodies. Once she gathers enough crystals, she can toss Dicey to roll a number and stop the flow of time. The number determines which cards from her hand she can use. Each card has a number assigned to it and an effect, like creating a potion that heals Even or taking the shape of a sword so she can fight back. After making your selections, you can manually restart time and fight back.

The whole process feels clunky (particularly in the beginning when Dicey can only roll a one or two, which constrain resources), but it’s definitely unique. Even when you have the ability to fight back, the game is more focused on precise dodges and mobility than a feeling of power. Even’s dash doesn’t go very far, but dashing right before an enemy strikes grants an extra burst that propels her further and gives players the chance to turn around and strike while an enemy has their back turned. Getting the dash timing right is extremely satisfying, and the game rewards players for luring enemies into other foes’ attacks, since they can and will damage each other while trying to get to Even.

Like the dialogue, many of the battles just go on way too long, making it frustrating when you get close to the end and are taken out by an enemy’s spear because you dodged incorrectly.

I wish there was a greater variety of cards — I found myself using the same ones over and over again, and the game’s card salesman usually only gives players the opportunity to buy more of what they have. There’s also a lack of enemy variety; by the time I was halfway through the game, I’d only seen four different types. There are a handful of board game-style fights, which shake up the battle environments a little bit, but they don’t add anything particularly interesting to the game.

The arenas themselves can be frustrating. Most of them are circular, which makes it easier to kite enemies around and gives room to dodge, but they’re still angular enough that I frequently found myself dashing into walls and other objects and getting caught. The difficulty ramps up pretty quickly, and the sheer number of enemies in some arenas can make battles a slow slog.

Like the dialogue, many of the battles just go on way too long, making it frustrating when you get close to the end and are taken out by an enemy’s spear because you dodged incorrectly. Such is the nature of a Soulslike.

Outside of design issues, I ran into a surprising amount of bugs during my time with the game. Besides the aforementioned audio problems, every time I started the game up, I got a message that said: “Controller not found.” I was playing on PC, so it was a strange message to receive. I also hit a game-breaking bug and a crash, both of which required me to restart the game in order to progress. Lost in Random autosaves, so it wasn’t too big a deal in either case, but experiences like those drive the frustration factor higher than it should be. The game is getting a day one patch on release, so hopefully that fixes some of these more egregious issues.

While my review key was for PC, I would undeniably recommend playing the game with a controller or on console. There are some very strange default key bindings, and the game felt both too touchy and too clunky with a mouse and keyboard. Soulslikes are traditionally best played with a controller, and this game is definitely right at home in that group.

Lost in Random is like a storybook come to life, but that isn’t enough to carry it above its struggles. I found myself saying I wish a lot: I wish there were more enemy and card variety. I wish there weren’t so many bugs. I wish the dialogue wasn’t quite so rambling. The game has so much promise, and it succeeds on a lot of the things it sets out to do, but its shortcomings are too numerous and too big to prevent it from rolling a six.

The main story itself is roughly 20 hours, though there are plenty of sidequests for devoted players. There are a few collectibles to find, too, so completionists will have a reason to extend their play session. The story is linear and one-off, so there’s no reason to replay it.

Players looking for even more of a hardcore experience should check out the Dark Souls and Bloodborne series for more pure and straightforward takes on this style of combat. Though it’s pretty old at this point, the hack-and-slash game Alice: Madness Returns has a similar visual aesthetic that feels more “grown-up” than Lost in Random.

Yes — if you’re a player who loves storybook-style adventures and dialogue-heavy games, you should give Lost in Random a look. (For those who just want to see the story, the game’s difficulty can be turned down.) It’s also worth a look for players who want to dip their toes into Soulslike games. Everyone else can probably skip it.

Topics
The best PSVR games for 2023
The Elder Scrolls Online’s 2023 updates bring players back to Morrowind
The best Fire Emblem games, ranked from best to worst
Redfall’s May 2 release date revealed during Developer_Direct
How to cheat in Words With Friends
Shoulders of Giants brings mascot-era nostalgia to the roguelite genre
Like a Dragon: Ishin’s Trooper Cards are full of cameos, including Rahul Kohli
How to romance characters in Fire Emblem Engage
How to eliminate enemies with no ranged weapons in Fortnite
Fire Emblem Engage gift guide: every character’s favorite gifts
Call of Duty: Warzone 2.0 Season 2 will finally fix its looting system
The best capture cards for 2023: Xbox, PlayStation, and PC
Best Gaming PC Deals: Save on RTX 3070, 3080, 3090 PCs