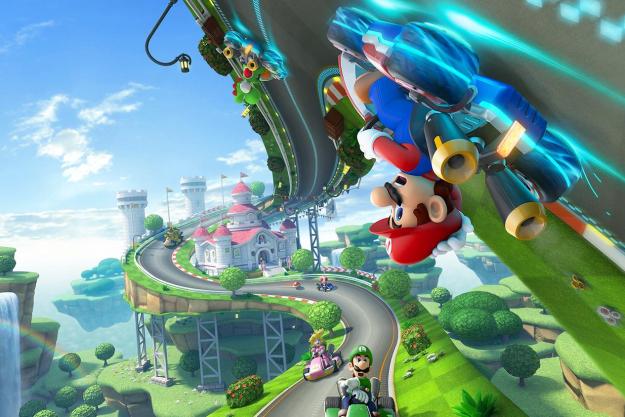 “Mario Kart 8 is a sterling example of Nintendo at their best as craftsmen, a game whose attention to detail and joy is mostly unsullied by some unfortunate misunderstandings about how people communicate online.”

Mario Kart 8 is here. The game that should have launched with Wii U – old faithful itself – is back. It’s is not the first online version, or the first to offer co-op, but with anti-gravity karts, gliding carts, new items, HD graphics, and new course types, Mario Kart 8 isn’t resting on its laurels either.

The game’s small changes stack on top of one another adding up to a game that doesn’t reinvent the wheel, but passes its forebears through sheer execution. Bottom line, it’s one of the best multiplayer games available on Wii U. Were it not for a couple irksome problems born of Nintendo’s still flawed online services, it would be the best game on the console, period.

Mario Kart 8 doesn’t reinvent the wheel, but passes its forebears through sheer execution.

The attention to fine detail in Mario Kart 8 demonstrates handily why people were frustrated by Nintendo’s reluctance to make HD games last decade. Of the 16 new courses, none fail to impress. Little raver Shy Guys bug out and dance all over the club themed Electropark; giant stone wheels rumble down Thwomp Ruins obscuring ramps to let you drive up walls; and snaking branches open new routes around clouds and Bowser’s airships on Cloudtop Cruise.

That attention to detail also extends to the 16 classic courses pulled from past games, though the facelift doesn’t save the ones that weren’t great start with. Donut Plains from the SNES is spiced up with jumps and Wii’s Moo Moo Meadows has some beautiful lighting, but neither is up to the standard of new courses like Mount Wario – our new favorite.

Mount Wario deserves special note because it embodies Kart 8’s sly variation on the standard circuit racing. Rather than just a closed loop, Mount Wario is a literal race down the mountain, bringing you through icy caverns, snowy forests, and even down a slalom course until you reach the base. (The all-mountain rush reminds us of snowboarding titles like 1080 Snowboarding and SSX 3.) Double Dash introduced this idea with DK Mountain, where you’d race down the mountain, but even it would shoot you back up with a cannon to repeat the course, as usual.

Mount Wario also emphasizes how speed manipulation is so crucial, and so fun when you pull it off correctly. Holding the right trigger on your controller still lets you jump your kart, bike, car, or ATV and hug a corner, turning a long drift into a Power Slide or a boost if you hop off a ledge or jump in a course.

The new courses thread opportunities to use these methods one after the other just right, rewarding skill and practice with different karts and racers of varying weight and speed.

Like Double Dash and Mario Kart Wii, your kart type greatly impacts your steering, and like all of the series, there are different weight classes. If you choose with Rosalina in one of the big Caddy racers, and you may want to avoid routes with tight corners. Instead, save those tight corners until you are using Iggy Koopa on a bike. The course design also benefits from new items like the boomerang and Super Horn. The Super Horn is a defense tool that can even cancel out the dreaded Blue Shell, which automatically targets whoever’s in first place. Blue Shells are the great equalizer, so we’re glad there’s at least one way skilled players can avoid them.

Though it’s possible to play with friends, it’s difficult to communicate with them.

Crazy items like those and improved AI makes solo racing feel more competitive, but not perfect. Still, all too often, a perfect run at the Grand Prix can be spoiled at the very last second by the AI bombing you with multiple attack items, Super Horn or no Super Horn. Frustrations like those are part and parcel with Mario Kart even here, which is a shame for anyone looking for perfectly balanced competition.

In multiplayer mode, the better item balancing creates beautiful chaos. Split-screen multiplayer with friends on the couch also benefits the most from the increased visual fidelity, making it much easier to follow the action. Online multiplayer, meanwhile, is the smoothest offered on any home Nintendo console. One or two local players can hop online, select from world, regional, or friend racing pools and get going swiftly. We had no problems finding matches when we were testing the game several weeks before its retail release, though it was rare to find a full 12-player showdown, and the wait from mode selection to race was just minutes. Even races with just half that12-player maximum were competitive and hectic. Whether or not someone discovers a way to cheat like the infamous snaking method in Mario Kart DS remains to be seen, but at this point everything is solid, with one major exception.

Mario Kart 8’s biggest problem that, though it’s possible to play with friends, it’s difficult to communicate with them. Unlike in PlayStation 4, Xbox One, Steam, or even Apple Game Center games, there are no obvious cues when your friends are online, or if they’re trying to invite you to race. In fact, the only reason we noticed a friend had popped online at one point was that we were playing using the GamePad screen and not the television. A quick blue flash on the home screen indicated that my friend was online, so we went to start a race open to friends. The in-game menu made no indication that he was playing (though I confirmed later he was), but we sent a Nintendo Network message to him to get in touch.

Wii U doesn’t flash a notice on screen that you’ve received a message from a friend, so our friend had no clue we’d tried to set something up at all. In a game as carefully considered in almost every other respect, a small issue like this becomes a glaring problem. Nintendo has certainly made strides since Mario Kart 7 (3DS) in letting you play with strangers, but communicating with your own friends is still a hassle.

Not being able to communicate with friends properly isn’t a big enough hassle to bring down the complete product, though. Mario Kart 8 is going to go down in history as the Mario Kart that everyone likes best. Not many people out there own a Wii U at this point, but anyone who gets the chance to play Mario Kart 8, whether it’s their first or their eighth Mario Kart, may find their new favorite.