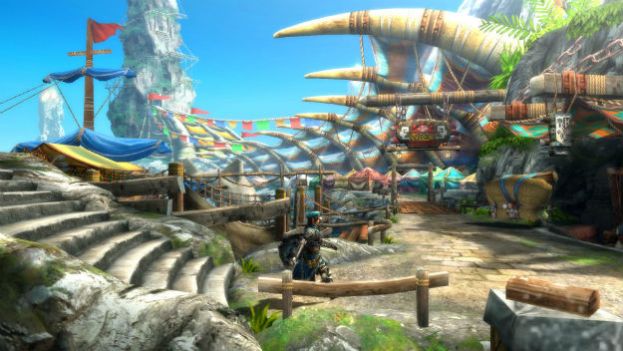 Monster Hunter 3 Ultimate is coming to the Nintendo 3DS and Wii U in the US this March. It will be the latest of many attempts on behalf of Capcom to make its social role-playing game a success outside of Japan. Given the Wii U’s improved online capabilities over the Wii, Ultimate stands a better chance of finding an audience than its home console predecessor Monster Hunter Tri and a far better chance than PSP-bound entries like Monster Hunter Freedom Unite. With 3 million Wii U consoles in the wild now, there’s also a solid audience to build a rich online community with. Unfortunately, though, many players won’t get to play with one another since Capcom is restricting servers to specific regions.

Speaking Gamereactor on Thursday, Capcom admitted that Monster Hunter 3 Ultimate would not allow international play. “Japanese will play with Japanese,” said the company, “Americans with Americans and Europeans with Europeans.”

Capcom acknowledged the instant fan outcry online. “I’m not thrilled with the servers being split either,” said Capcom USA’s community specialist Yuri Arujo. “I am definitely aware of the demand and feedback, not only in the thread, but also from threads before finding out this bad news… There is no guarantee this will change, though.”

Monster Hunter 3 Ultimate could set a dangerous precedent for Capcom’s games on Wii U. The company’s online games for the Wii U’s main competitors, Xbox 360 and PlayStation 3, often allow international play. Super Street Fighter IV, Dragon’s Dogma, and others let players from all over the world interact online. Nintendo, though, doesn’t provide a central network for all games on the console to connect to for multiplayer the same way as an Xbox Live or PlayStation Network.

Nintendo’s Wii U is better equipped at hosting games for online play than its predecessor since it no longer requires players to register unwieldy Friend Codes and has a network in place to actually deliver balancing patches for games. To date, though, Nintendo’s decentralized structure for multiplayer has made for a fractious multiplayer scene. Even popular titles like Call of Duty: Black Ops 2 have only hosted around 1300 players during peak play hours on Wii U, even though the game’s sold approximately 150,000 copies.

How to play Mario Kart 8 online with friends