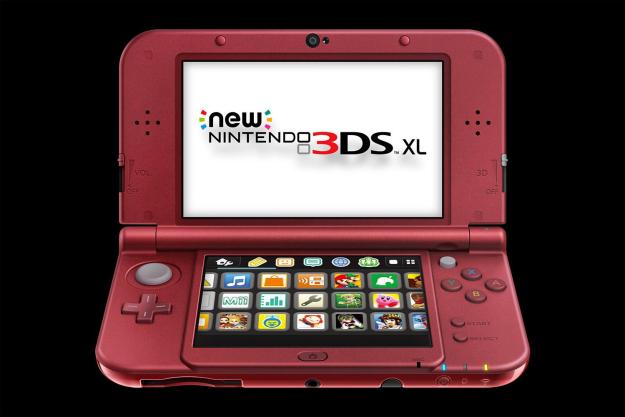 “The New Nintendo 3DS is a great upgrade proposition, so long as you don’t mind dealing with a few headaches.”

The “New Nintendo 3DS XL” name isn’t flashy. Nor does it stick in your head like Wii and Wii U. But it’s direct, and to the point: This 3DS is most definitely new, sporting features that haven’t existed on earlier models of the handheld. But does it offer enough to justify plunking down another $200 for one? Let’s consider.

The improved 3D is a big positive. Nintendo launched the OG 3DS in 2011 on a wave of “glasses-free 3D” hype. The feature worked, but only just. You got a convincing 3D effect on the tiny screen if you remained perfectly still, but any movement at all broke the illusion. The image doubled, rendering your game unplayable, and headaches (real and metaphorical) ensued.

The New 3DS fixes that problem almost completely with face-scanning tech that knows where your face is and adjusts the 3D display on the fly. The result leaves you with significantly improved range of movement, even with the 3D effects set to max. Games that use the built-in motion sensors are legitimately playable in 3D, and the feature also works great in moving vehicles, such as subways and buses.

Face-scanning isn’t a perfect solution, however. You can confuse the sensors just by lying on your stomach with your chin resting on a pillow, or sitting in any position that hides part of your head from the screen-side camera. Or just turning away for a moment. It recovers quickly enough when your attention returns to the screen, but there’s always a jarring, eye-crossing moment while the illusion snaps back into place.

All of that said, this is one of the most impressive implementations of glasses-free 3D that we’ve yet seen. It may be four years late, but Nintendo’s hype train has finally, successfully pulled into the station. The 3D works well, and it enhances your experience in most any game.

The New 3DS also adds a second control stick-like interface on the right side of the unit, eliminating the (admittedly limited) need to own a Circle Pad Pro. It’s not a traditional stick, falling closer to the hard, rubber nubs that ’90s laptops tended to use for integrated mice.

What we’re left with is a mid-generation upgrade that isn’t quite essential, but it could be at some point.

Its initially awkward feel fades away quickly thanks to responsive controls, which were apparent in our time playing The Legend of Zelda: Majora’s Mask 3DS. Having full camera control at your fingertip really enhances a game like that, where navigating a 3D world was previously relegated to button presses that centered the camera behind your avatar. The right analog nub-thing requires only a light touch, and it is comfortably positioned just above the handheld’s four face buttons.

Nintendo also improved the controls by adding a second pair of shoulder buttons to complement the two that were already there. They protrude more than the stock shoulder controls, which makes them easier to locate when you’re reaching for them.

The only problem for both the nub and shoulder buttons is the fact that not many games support them – only titles that were updated or built to support Circle Pad Pro. In the future, expect to see 3DS games that only the “New” model can support. But we’re not there yet, and the New 3DS’ status as a mid-generation hardware upgrade means there’s not a fresh library of “launch” titles to choose from.

Nintendo’s been very vague about the improved internals in the latest handheld, but the increased horsepower speeds up elements such as the dashboard and load times. For what it’s worth, the improvements in those cases are definitely noticeable – but there’s no software as of now that makes use of the more powerful hardware.

Last among the key feature adds is near-field communication (NFC) technology, which allows the New 3DS to “read” information wirelessly from Nintendo’s Amiibo figurines. It works. You place a figurine on the handheld’s lower screen and it reads data into select games. The implementation could be better in Super Smash Bros. 3DS, the game we tested with, but that’s not the handheld’s fault.

And hey, there’s a better camera. Did anyone use the original 3DS for its camera capabilities? While you probably already have a smartphone that takes better shots, the New 3DS camera is at least a step up from before, with sharper images and better performance in low-light settings. Other than the niftiness of taking photos in 3D, you’re still better off snapping pics from your phone.

When things start to get blurry

That’s all the good stuff. The New 3DS is also victim to some highly questionable design choices, starting with the switch from SD card storage to Micro SD storage. Unless you were already using a Micro SD card & adapter in your older 3DS, you’ll have to purchase a completely fresh card for the new handheld. No big deal if you’re buying a 3DS for the first time, but an odd punishment for longtime 3DS users.

Getting to the Micro SD slot requires unscrewing a pair of tiny screws on the back of the device and popping off a back plate, which grants access to both a Micro SD slot and battery. That’s an unwelcome shift away from the far easier side-mounted slot that the original 3DS sports. The screws holding the New 3DS’ rear plate in place are very small, so you’ll need to buy a #00 Philips head screwdriver (typically found in PC toolkits) if you don’t already have one. Fortunately, the New 3DS ships with a 4GB card pre-installed, which should be plenty for those that prefer to buy cartridges over eShop downloads.

Transferring content from an old handheld to a new one is a hassle due to Nintendo’s lack of a unified account system. It’s bad enough the GameStop had to devise an elaborate trade-in policy for customers looking to upgrade. If you do a transfer, make sure to follow Nintendo’s guide carefully, and try to avoid the wireless transfer option, as it can be a lengthy process.

The final injustice: There’s no power adapter in the box. We’ve already criticized this shortcoming at length, and that attitude hasn’t changed in the weeks we’ve spent playing with the New 3DS. There’s just no excuse for making an add-on purchase a requirement, and it’s a crummy thing for Nintendo to do to its customers.

What we’re left with is a mid-generation upgrade that isn’t quite essential, but it could be at some point in the future. If you’ve never owned a 3DS before, this is the one to get. And if you’re mulling an upgrade, there are a lot of attractive features here. Would it have been nice to see this stuff back in 2011? Definitely. Does it make the original 3DS seem like an unfinished product in hindsight? Yup.

It’s an easy choice for first-time buyers: The 3DS is great, and the New 3DS is the best execution of the handheld so far. But only serious tech geeks should bother with an upgrade at this point. Unless the glasses-free 3D or Amiibo compatibility are important, there’s nothing in Nintendo’s catalog right now that demands the newer hardware. We’ll eventually see games that are “New 3DS-only,” but — if you can bear it — skip the upgrade until that happens.

Topics
The best Fire Emblem games, ranked from best to worst
Goldeneye 007 comes to Game Pass and Nintendo Switch later this week
The best RPGs for the Nintendo Switch
The best Xbox Series X and Series S deals for January 2023
How to connect an Xbox controller to a PC
GTA 5 cheat codes and secrets for PS4, PS5, Xbox, and PC
WWE 2K23: release date, editions, pre-order, and more
Despite divisive dialogue, Forspoken gets a lot right about open-world games
How to link your Fire Emblem Engage and Fire Emblem Heroes account
Xbox and Bethesda’s Developer_Direct: how to watch and what to expect
The best iPhone games in 2023: 31 games you need to play right now
I can’t believe I’m recommending Forspoken on PS5 over PC
Redfall’s May 2 release date revealed during Developer_Direct