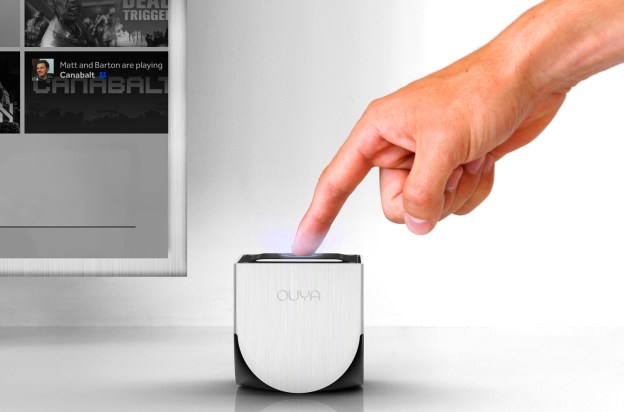 The little console that could… can’t. Not just yet, at least. Ouya confirmed via  a press release that it won’t be making its planned June 4, 2013 retail release date. The new launch date for the successfully Kickstarted Android mini-console is June 25, a move that CEO Julie Uhrman says is aimed at having “more units on store shelves in June,” according to Joystiq.

News of the delay is tucked in at the bottom of the aforementioned press release, though there’s no indication there that the release date has ever been anything other than June 25. The rest of the news blast details the company’s newly won $15 million in funding from an assortment of investors: Kleiner Perkins Caufield & Byers (KPCB), with participation from the Mayfield Fund, NVIDIA, Shasta Ventures, and Occam Partners.

Former Electronic Arts chief creative officer Bing Gordon happens to be one of the partners at KPCB. He joined the company in 2008 and heads up the sFund, an investment initiative established in 2010 that focuses on shepherding social-leaning apps and services into being. Gordon now joins Ouya’s board of directors.

We’ve had very positive reactions to Ouya so far here at Digital Trends. The company made all the right moves early on, with a slick Kickstarter campaign and an encouraging lineup of creative collaborators working behind the scenes. Speaking personally, I was sold by the hype and quickly stepped up as a backer in 2012, early on in the Kickstarter campaign.

All seemed to be encouraging for the console until it started shipping to Kickstarter backers in late-March. Early reports from the variety of media outlets that were lucky enough to receive one immediately suggested that Ouya wasn’t quite in a release-ready state. It was at this point that the company stepped up and clarified for the first time that backers receiving their early consoles were part of a “preview period.” It was the first time the pre-retail launch period had been described in this way.

To be clear, Ouya’s Kickstarter page says the following about the console’s state of readiness: “We expect to have a finished product ready to ship to you in March.”

Speaking as a backer, I continue to wait for my own console to ship, more than one month now after the original promised March 28 ship date for backers. As the funding figure climbed and climbed past the $950,000 target to more than $8.5 million it became clear that a staggered backer mailing would be happening. As it turns out, those who spent extra more money on things like extra controllers or the limited edition console that was offered in the final week of the Kickstarter, ended up having to wait longer.

On the press side, I have the sense of a company that is young and disorganized. In the time since the Kickstarter launched – a window of less than a year – I’ve communicated (or tried to communicate) with no less than four different media representatives. Interviews have been cancelled then rescheduled, only to be cancelled again. Emails and follow-ups have seen no replies. This isn’t a universal experience in the press, but it’s the perspective we’ve been left with.

To be clear, I’m still behind Ouya. I think the technology is sound – or looks it, at any rate – and I think the top creatives at the company are making the right moves and saying the right things. The stumbles we’re seeing now strike me as nothing more than the growing pains of a company that got a little bit more than it expected when a $1 million bid for funding skyrocketed to almost 10 times that amount. The “preview period” backpedaling and stealth release date shift are both a bit suspicious, but I remain optimistic.

All that said, the real test won’t come until June 25. That’s two weeks after the start of E3, a time when the gaming world is still buzzing on a wave of reveals and debuts. Some of which will undoubtedly spring directly from Ouya. The tiny Android console is delightfully portable and differentiates itself enough on the content side to serve as a complementary living room adornment rather than a full-blown console replacement.

This is a year that will set the course for gaming and gaming trends to come over the next 5-10 years, or more. Ouya continues to occupy the role of discussion-worthy outlier. That’s going to change, one way or the other, on June 25 when the retail version launches and the hardware becomes an active player in the console conversation.

Topics
Video-editing app LumaFusion to get a Galaxy Tab S8 launch
How to turn on ray tracing in Minecraft
Every video game delay that’s happened in 2022
The best games for Steam Deck
The Witcher 3’s long-delayed current-gen update launches this December
The best Call of Duty: Warzone 2.0 weapons for Season 1
How to get all starters in Pokémon Scarlet and Violet
Black Friday: This MSI gaming laptop just dropped under $500
Evil West perks guide: best perks to buy first
How to evolve Pawmo into Pawmot in Pokémon Scarlet and Violet
Live now: Save $50 on the Microsoft Xbox Series S Digital Edition deal
‘Wordle’ today, November 24: Answer, hints, and help for word of the day (#523)
7 video game characters who deserve a Macy’s Thanksgiving Day Parade balloon