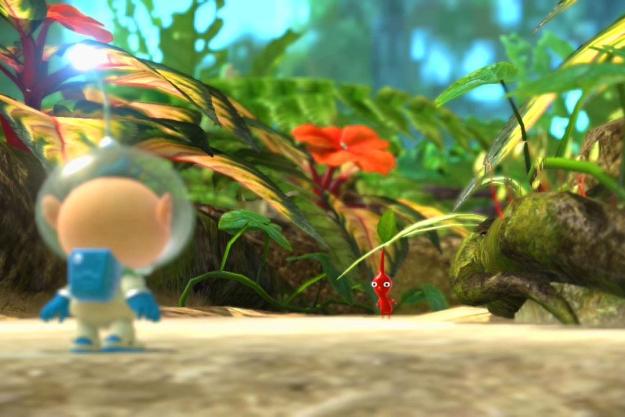 “Pikmin 3 doesn't have enough of a mainstream hook to sell a ton of Wii Us, but it's one of the best and sharpest-looking games to date for Nintendo's new console.”

Pikmin 3 is an odd choice for a Wii U savior. Strip away the cute, little plant-like aliens and you’re left with a highly technical real-time strategy game that ditches epic-scale warfare in favor of exploration and environmental puzzle-solving.

It’s a calculated choice for kicking off the second wave of first-party Wii U titles, one that speaks to Nintendo’s awareness of its audience: Wii U owners are hardened fans that want to be serviced as such. Who needs a less-than Call of Duty port when you can revisit a classic series that also happens to be the subject of a long-asked-about sequel?

Pikmin 3 charts the travels of three brave explorers from the planet Koppai. The people of their home world are dying out, victims of their own ravenous appetites. With no resources remaining to sustain the Koppaian people, probes are sent out across the galaxy in search of new food sources. One probe, sent to planet PNF-404, comes back positive, and that’s where our trio of explorers comes in.

… a quality game that speaks directly to the majority of the Wii U-owning public.

Captain Charlie and his crew, engineer Alph and botanist Brittany, set out to chart the distant world and plunder its ample supply of fruit. Two problems crop up shortly after their arrival: first, the fruit is big – far too large for them to carry on their own – and second, there’s nowhere to put the fruit after they make an emergency crash landing and are separated.

The latter issue works itself out over the first third of Pikmin 3‘s story, essentially a light tutorial built around reassembling both the crew and their ship, and solving that first problem with the help of PNF-404’s indigenous Pikmin. The friendly, multi-colored, plant-like beings swarm in large numbers all around the planet, and they’re perfectly willing to follow your every order, whether it involves lugging an outsized chunk of fruit or marching ever-forward to their certain death.

They’re brave little fellows, if not too bright. With their numbers, they could easily take down the three fruit gluttons and have a little carnivorous feast of their own.

The heart of Pikmin 3 is its story mode, a 10-ish hour adventure that sees you assembling your crew, gathering fruit, and solving a mystery that fits into the series’ larger story arc. Using the three Koppaians and the four types of Pikmin they eventually learn to farm, you wander through five highly varied environments that offer a mixture of fruit-finding, puzzle-solving and straight-up combat.

The perfectly-paced tutorial introduces each of the four Pikmin types – red, fireproof warriors, black, crystal-busting tanks, lightweight yellow critters that channel electricity, and tiny, pink fliers – while providing ample time to grow accustomed to using each one before introducing the next. All of this happens while you reassemble your crew and figure out just what the heck is up with this crazy planet.

Ordering your Pikmin “troops” around is as simple as choosing the color you want – that’s how they’re divided up as they follow you – and literally throwing them, one at a time, at the target of your choice. Your color choice is often determined by the situation. Red Pikmin are great for taking on enemies, but electrical fences will fry them. That’s where the weaker yellow Pikmin are handy; they’ll happily head butt any electric barrier into oblivion at your request.

Each of the five climate zones you visit over the course of the story amounts to a massive playground that slowly reveals itself as you gain access to new Pikmin. One of the very first zones you visit is returned to roughly two-thirds of the way in, the mystery stripped from its abundance of previously inaccessible locations.

Only time and resources limit your play. Time in terms of the hours of daylight on PNF-404; you can’t explore at night, so it’s important to gather all of your Pikmin “in the field” – a maximum of 100 – into your party before each day concludes at sundown to keep them from being eaten. Each finished day also consumes one container of juice on your ship, so it’s important to use the daylight hours to ferry fruits back to your ship while you’re exploring.

Some fruit is simply out in the open for the taking, but most of it is tucked away behind puzzles and an assortment of enemies, ranging from tiny non-threats to towering bosses that often take multiple days to finish off (damage done to a boss is persistent). Fruit juices keep your Koppaians happy and animal corpses swell your reserve supply of Pikmin forces.

The flow of risk/reward in Pikmin 3 is very satisfying, with a moderate level of challenge that stumps for as long as it takes you to spot some environmental cue that you previously missed. A handy “restart day” feature encourages experimentation; 100 Pikmin might perish in a failed experiment, but you can get them back and attack a particular problem from a different angle, wiser than you were before.

… easily the best-looking Wii U game yet by a wide margin. The spaces you explore teem… with secrets potentially tucked away around any corner …

The spirit of playfulness is only occasionally marred by technical shortcomings. There’s a fiddly camera to contend with, one that sometimes switches to a fixed perspective to highlight some Important Thing or another. Unfortunately, this can happen when there are enemies in the vicinity, and your little Pikmin army will quickly disappear off-screen while you struggle to move out of the fixed camera zone.

Using your full crew to explore in different directions can also be a pain. Chucking Pikmin at one obstacle or another never feels tedious, but certain puzzles that require splitting up your crew – and the complement of Pikmin swarming around them – get a little sloggy at times. Worse, this dividing of your forces highlights a larger problem with troop management in Pikmin 3.

While the game is fundamentally a real-time strategy exercise, players have the ability to pause at any time and set waypoints for individual crewmembers. They and their Pikmin followers will dutifully march to the destination you’ve set, but the AI isn’t sharp enough to deal with – or even simply avoid – any threats that appear along the way.

The concept of splitting your forces and dividing your exploration efforts is sound, but it stumbles in the execution. There’s rarely any benefit to dividing your group up unless a particular puzzle requires it. You just don’t have enough time in the space of a single game day to make an area “safe” and then effectively split up to explore. Some players might have the patience for multi-group micromanagement, but in our experience it often consumes more time than it’s worth.

This is a minor complaint in light of the bigger success, which amounts to a gorgeous HD rendering of Pikmin play that longtime Nintendo fans adore. Pikmin 3 is easily the best-looking Wii U game yet by a wide margin. The spaces you explore teem with life, with secrets potentially tucked away around any corner and under any bit of shrubbery.

It’s not just the story either. A separate multi-stage Mission mode and a local multiplayer Bingo Battle offer twists on the longer-term play of the core game. Both offer a more focused approach to various aspects of the game, usually with tighter time constraints and the added bonus of bringing back other breeds of Pikmin that don’t factor into the main story. It’s a surprisingly hefty chunk of extra content, especially the Mission mode.

Pikmin 3 is a victory for Nintendo’s struggling Wii U. It signals recognition on the company’s part that the broad success that defined the Wii is absent now. The hardcore niche that’s embraced the new console wants games like Pikmin, and they can enjoy the best effort for the series to date in Pikmin 3. This isn’t the “killer app” that Nintendo so desperately needs to knock the undecided off of their fence-top perches, but it remains a quality game that speaks directly to the majority of the Wii U-owning public.

This game was reviewed on a Wii U console using a digital download code that was provided by the publisher.

FTC files lawsuit to block Microsoft’s Activision Blizzard acquisition
The Game Awards 2022: how to watch and what to expect
The best places to land in Fortnite for Chapter 4
Marvel’s Midnight Suns hero guide: every hero explained and ranked
Warzone 2 PC settings guide: best graphics, audio and interface settings
Starfield, The Elder Scrolls Online devs are voting to unionize
PS5 Restock: Console is in stock at Best Buy now
The best Xbox exclusives of 2022: 6 Game Pass greats that saved Microsoft’s quiet year
‘Wordle’ today, December 7: Answer, hints, and help for word of the day (#536)
Fortnite Chapter 4 has completely stolen Warzone 2.0’s thunder
The best PS5 exclusives of 2022: standouts from the console’s strong second year
Diablo IV is a promising return to form, but not without red flags
The best Vaznev-9K loadout in MW2