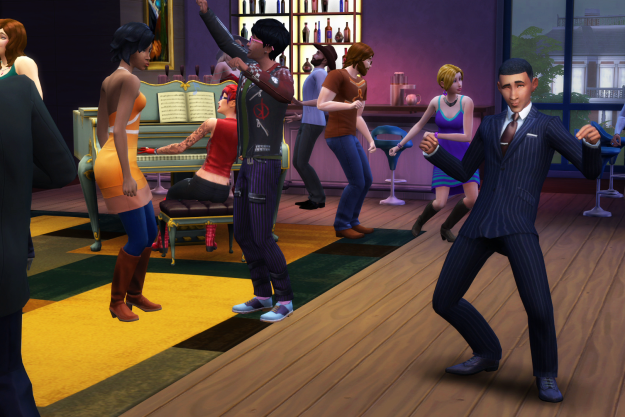 “The Sims 4 killed my girlfriend with fire. It's the same quirky, oddball good time it's always been.”

The Sims 4 killed my girlfriend with fire.

Let’s set the scene: Virginia and I are preparing to move in together in real life, so I thought it would be fun to replicate that experience in The Sims 4. I created our likenesses, bought us a house, and got us jobs—writer for me (of course), criminal for her. She’s a midwife in the real world, but there’s no medical profession in The Sims – babies just magically escape from their pregnant mothers some time after a special round of WooHoo (Simlish for SEX) – and a life of crime seemed like a good alternative.

I came home to find a fire-scarred kitchen, a dead girlfriend, and the Grim Reaper surveying the grisly scene.

Unfortunately, Virginia’s shady dealings put her and I on opposite schedules. She’d always be just coming back from a long night of hustling and scheming just as I was heading out to the office. It was fine at first. I’d cook us both breakfast and she’d eat without me. We pined to see more of each other, but we remained happy.

That is until I overslept one morning and skipped out on cooking. She came home, tired and hungry, and decided to make some mac and cheese. Unfortunately, she never really got the hang of the whole cooking thing since I handled that. The oven exploded in her face and no one was around to put out the flames. I came home that evening to find a fire-scarred kitchen, a dead girlfriend on the floor, and the Grim Reaper surveying the grisly scene. So my AI-managed Sim did what any reasonable person would do: Grabbed a drink from the fridge and went to bed.

This little anecdote says so much about the unexpected joys and code-limited shortcomings of The Sims 4‘s “real life simulation.” Sims are simple creatures, guided by a sliding set of meters that dictate their ever-changing needs. Bathroom meter falls into the red? Go use a toilet. Fun meter flagging? Play a game. Energy meter bottoming out? Sleep. With no outside interference from the player, Sims see to their own needs to the best of their abilities, but only you can push them to be more.

The game reduces the human condition to its most basic, necessary components, but leaves the narrative for those experiences to be fabricated in the mind of the player. That was as true in The Sims as it is in The Sims 4, just much more finely tuned now. There’s multitasking, for one. Sims are now capable of socializing while they eat, dance, exercise, and more. It’s a welcome feature; simple though it might be, something like multitasking really helps to create a more true-to-life virtual existence.

Which isn’t to say that The Sims 4 is at its best when it’s replicating real life perfectly. The daily grind of waking up and going to work is an ever-present requirement as that’s the most reliable source of income for your Sims. The early game feels especially restrictive since starting jobs pay so little. Virginia and I both had jobs before she caught fire because we had to; there was no other way to pay for our simple existence.

There’s a progression, of course. Creating a new Sim – a very tactile process in which you click and drag to manipulate the shape of the body – also involves picking their Aspirations and Traits, which lays out a loose sort of life path for them. Complete one of your life goals and you earn special currency that can be spent on potions that ease your Sim’s needs, reverse aging, and cheat other aspects of the game in your favor.

If you want pets or pools or any number of other features, keep playing The Sims 3 while you wait for content to start rolling out.

It’s a rare concession to fantasy in a game that tries very hard to anchor itself in reality. Yes, it’s a twisted take on reality in which no one ever gets sick, jobs pay 1950s salaries against a 2014 consumer marketplace, and everyone refers to sex as “WooHoo.” The potions are just another part of that bizarre charm, much like the series-standard cheat codes. Don’t like the starting lot for your Sims? Cheat them up $100K and give their virtual lives an easier start.

The bigger improvements in The Sims 4 happen on the creative side, and they’re great. Create-a-Sim lacks the depth that it’s had in the past, but the more intuitive push-and-pull tactility of body modification is a huge step forward from the esoteric sliders of past games. More welcome is the combining of Build and Buy into a single mode; it’s now possible to erect a house and fill it with stuff (provided you have the money) in a single, seamless act.

User-friendliness was clearly a focus in the design here, starting with fully furnished room “types” that you can drag-and-drop into a space, then tweak as you like. A handy search feature also makes hunting down specific items a snap; just like the Mac OS Finder app, you just type the thing you want and the search dynamically fills out a list of hits as you go.

The only significant problem is the expected regression that’s been the standard for each new numbered entry in this series. Sims games live and die on their post-release expansion packs, so The Sims 4 at launch is not the same game you’ll be playing in 2015. If you want pets or pools or any number of other features that are standard now in The Sims 3, keep playing that one while you wait for content to start rolling out.

The Sims 4 might have killed my girlfriend with fire, but it did so in such a whimsical and oddball way that I can’t be angry with it. There’s not a whole lot of mystery to this series. Like many annual release games like Call of Duty and Madden, there’s an established model that’s tweaked and fine-tuned, but never torn down and rebuilt from scratch.

That foundation remains in The Sims 4, and it’s as unusual a life simulator as any of its predecessors. It might be looking a little thin for now, but it’s sure to grow soon enough.

This game was reviewed on a first-gen Alienware X51 gaming PC using an Origin code provided by Electronic Arts.

You can win cash with PlayStation’s new tournament feature. Here’s how to sign up
‘Wordle’ today, November 29: Answer, hints, and help for word of the day (#528)
All Fortnite Chapter 3, Season 4 quests
Starship Troopers: Extermination turns sci-fi satire into a co-op shooter
How to redeem Mystery Gifts in Pokémon Scarlet and Violet
Call of Duty: Warzone 2.0 desperately needs to give players more health
Don’t miss this Xbox Series S Cyber Monday deal — ends midnight
Now’s the perfect time to stock up on PS5 controllers
How to evolve Tandemaus into Maushold in Pokémon Scarlet and Violet
Fortnite Chapter 3, Season 4 guide: All week 10 quests and how to complete them
Crisis Core: Final Fantasy VII Reunion works best as a portable game
Oh no, I’m already obsessed with Nintendo Switch Sports golf
Fae Farm is shaping up to be the coziest farming game ever