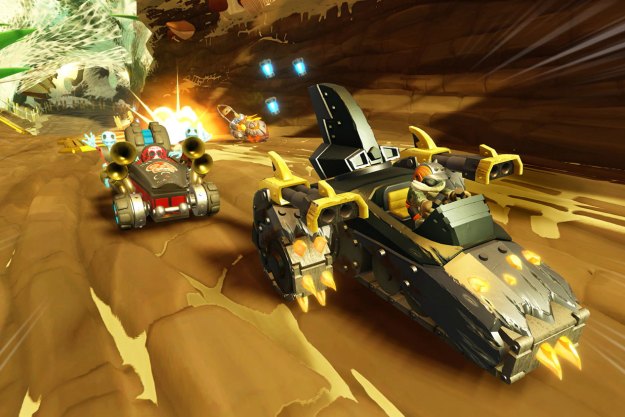 The Skylanders franchise has featured some innovative methods for keeping the games’ toys-to-life mechanic fresh from one installment to the next over the years. In 2013, Skylanders: Swap Force offered players the ability to mix and match parts of the collectible figures for different in-game results, for example, while last year’s Skylanders: Trap Team let you “trap” in-game enemies using plastic accessories in order to play as the villainous characters later in the game.

With Skylanders: SuperChargers, however, the franchise receives what may be its most innovative upgrade so far – both within the confines of its fictional universe and outside the game world.

This time around, the heroes of the Skylanders universe can take the battle to air, sea, or land in colorful vehicles that not only provide an entertaining new element to the game itself, but also serve as a nice reminder of the “toy” part of the toys-to-life genre. And in super-charging the series’ heroes, the Skylanders franchise offers up what may be one of its most enjoyable experiences so far.

Shifting The Story Into High Gear

The Skylanders development team has typically done a nice job of emphasizing the narrative side of the franchise’s universe, and that’s reflected in its fanbase, which includes a significant proportion of adults as well as kids. A combination of pitch-perfect voice casting and clever scripts has become one of the series’ hallmarks, and that tradition continues in SuperChargers.

The story in the latest installment unfolds as the world of Skylands is once again under siege from the diminutive, diabolical villain Kaos (wonderfully portrayed by Invader ZIM voice actor Richard Steven Horvitz), but this time he’s assisted by the powerful entity known as The Darkness. With the help of The Darkness (who has some ulterior motives), Kaos constructs a massive flying machine that ravages the floating world of Skylands and absorbs its magical essence. As the “Portal Master,” you’re tasked with rescuing the imprisoned Skylanders and saving the world.

Fortunately, you have some help getting around the now-scattered worlds of Skylands.

Round, Round, Get Around

In SuperChargers, your journey from one area to the next is made possible with the help of vehicles capable of traversing water, air, or land. Like the Skylander characters that pilot them, each vehicle can be upgraded with different attributes and abilities over time, and the vehicles are brought into the game world by placing toys on the NFC-enabled SuperChargers portal peripheral.

Although each new Skylander introduced in SuperChargers has its own vehicle with special abilities that engage when they’re paired, every character – including characters from past games – can pilot any vehicle. This is particularly noteworthy because there are more than 200 characters that have been introduced so far in the franchise, and while there are some character-based elements introduced in each game that differentiate the play experience from other Skylanders adventures, using older figures never feels like a restrictive experience in SuperChargers.

Off to the Races

While the new game brings with it a batch of new toys, the vehicle-racing element of SuperChargers is the game’s real hook – and it ends up being a very appealing hook.

When deciding how to handle the vehicular element of the Skylanders, the game’s development team seems to have looked to the right sources for inspiration. Relatively simple controls and the way each vehicle interacts with the environment (and other vehicles) gives the SuperChargers driving (and flying and boating) experience a pleasantly Mario Kart-like vibe, complete with playful “weapons” that take the fun to the next level.

However, while the great majority of the driving experience is intuitive in SuperChargers, players might encounter a steeper learning curve in some maps. At various points, the game forces force you to steer relative to the vehicle’s position on the screen instead of steering as if you’re in the vehicle itself. This leads to moments when you’re trying to make a left-hand turn but can’t seem to stop driving toward the left side of the screen, for example.

These confusing moments are rare, thankfully, but getting through them can be an exercise in frustration. In most cases, the SuperChargers driving experience strikes the right balance between fun and challenging moments, whether you’re competing in a race or battling an enemy at high speed.

Skylanders has been the gold standard in the “toys-to-life” genre for quite a few years now, but when it comes to the “toy” side of things, the collectible figures tend to have more in common with statues than the posable, articulated action figures kids (and adults) have become accustomed to. With SuperChargers, Skylanders takes a big step forward in that area, integrating an impressive amount of articulation into the toy versions of each vehicle.

Although this might not be a selling point for some players, it’s worth noting that the vehicle toys created for SuperChargers are exactly that: toys. The land vehicles have rubber-like wheels that spin, while the air and sea vehicles have spinning propellers and other articulated features. They all seem to be created from sturdy material, too – and would seem more than capable of holding their own in rough play alongside Hot Wheels cars and other popular vehicle toys.

This is the sort of “added value” that parents in particular will definitely appreciate.

The Skylanders games have always had relatively good replay value, with different characters unlocking different in-game elements and impressive amounts of hidden adventures and items peppering each game area. To its credit, SuperChargers ups the ante with noticeably more abundant side quests and competitive racing and battle modes that unlock myriad rewards and, in many cases, additional missions.

If you don’t have a large collection of figures, the main storyline in SuperChargers can be finished with just a single vehicle and figure, leaving the possibility of another playthrough (and a different experience) when you return with a different vehicle or figure.

The online multiplayer element of SuperChargers also adds quite a bit to the game’s replay value, and along with being secured behind a respectable level of parental restrictions (something else parents will appreciate), it also provides a fun, simple way to compete against other players. Chat functionality in online modes is only available when you’re competing against players on your approved friends list, so all the proper safeguards seem to be in effect there, too.

Where other toys-to-life franchises have been saddled with restrictive play elements that limit what you can do with their toys, Skylanders continues to set a high bar for unfettered interactivity between its toys – all of them – and the games that bring them to life.

Skylanders: SuperChargers brings that relationship to a new level, adding both a comprehensive multiplayer element that lets your collection interact with other players’ collections, and a new set of toys that are more than just fancy peripheral equipment. The end result is one of the most innovative entries yet in a franchise already known for thinking outside the box – in this case, both the game console and the toy box.

Skylanders: SuperChargers is available now for PlayStation 3, PlayStation 4, Xbox 360, Xbox One, and Wii U. This game was reviewed on PlayStation 4 with a copy provided by the publisher.

The best co-op games on Nintendo Switch
Dead Island 2: release date, trailers, gameplay, and more
The best Xbox Series X headsets
The best PS5 headsets
Pokémon Legends: Arceus deserves DLC before Scarlet and Violet
Hurry — this HP gaming PC is $450 for Cyber Monday
This is hands down the best Nintendo Switch Cyber Monday deal
How to get a free Gengar in Pokémon Scarlet and Violet
‘Wordle’ today, November 28: Answer, hints, and help for word of the day (#527)
Need a PS5 controller? This Cyber Monday deal has you covered
Save $50 with this (Oculus) Meta Quest 2 Cyber Monday deal
GameStop Cyber Monday Deal: Buy 2 Get 1 on all preowned Xbox One and PS4 games
Starship Troopers: Extermination turns sci-fi satire into a co-op shooter