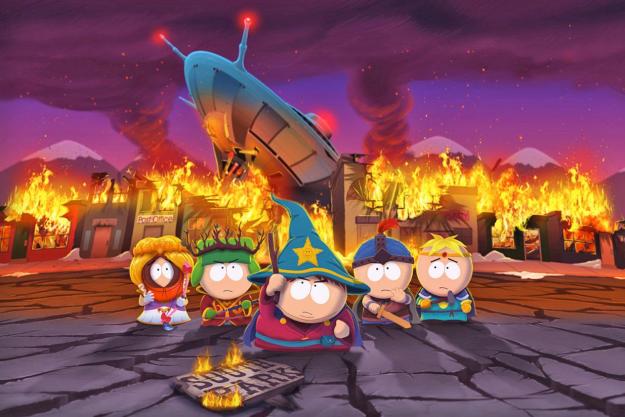 “Obsidian Entertainment delivers one of its best-ever efforts in South Park: The Stick of Truth, even if the game doesn't quite stick the landing.”

There’s something deliciously perverse in South Park: The Stick of Truth‘s design as a traditional turn-based RPG. It might be the fact that the edgy Comedy Central cartoon series created by Trey Parker and Matt Stone is known for pushing the envelope rather than folding into it. Or it might be Obsidian Entertainment’s broadly friendly approach to gameplay, which teeters between wholly accessible and downright challenging. Of course, it could also be the poop, and everything that the poop represents.

There’s something deliciously perverse in South Park: The Stick of Truth’s design as a traditional turn-based RPG.

Early on, you button-mash your way through a deuce-dropping minigame that rewards you with a “Shit Nugget” in the searchable toilet. This combat consumable can be thrown at an enemy to inflict the “Grossed Out” status effect, which causes the affected party to puke out health at the start of each turn. It’s an undeniably traditional gameplay element that’s coated in the thick grime of South Park‘s frequently filthy personality, and it speaks to the careful balancing act that the rest of the game achieves.

Parker and Stone’s story – they wrote the script and worked closely with Obsidian on the creative side – captures the frequently absurd kids-being-kids mundanity of their hit TV series, wrapping it all in an epic high fantasy adventure that riffs heavily on Dungeons & Dragons (with shades of The Lord of the Rings). The so-called “Stick of Truth” – actually an ordinary twig – is the central MacGuffin in a city-spanning live-action role-playing game that involves most of the third-grade boys. A more sinister plot plays out in a parallel storyline, but the multi-day LARP session establishes the framework for introducing your new kid in town protagonist to the show’s familiar faces.

It’s so perfectly South Park. The no-stakes struggle over an imaginary magical artifact is an all-consuming focus for these kids, but over time they also become oblivious participants in a quest to save the town. Your mute new kid – the game turns his silence into a running gag, naturally – scurries around the gloriously faithful 2D open world recreation of the town, solving problems and making friends, gradually becoming more and more of a key player in the larger story.

This is Parker and Stone operating at their level best as storytellers, capably adapting their style to the unique demands of a video game narrative. The writing duo have had great success in the past with dialing in their satire to focus on a single topic, but a 15-hour video game demands a lighter touch. Their trademark humor and (light) cynicism is there, but you’re never hammered with it. Instead, Parker and Stone set themselves to realizing South Park as an interactive playground, drawing on material from 17 seasons of TV to build a self-referential story that still makes sense within the larger fiction.

It’s difficult to discuss the specifics of Parker and Stone’s success without delving into spoilers, and that’s a product of the sharp writing. Many gameplay systems in The Stick of Truth are delivered in a way that is justified by the story. One-use-per-day Summons, that allow you to quickly end battles with help from characters like Jesus Christ or Mr. Slave, are unlocked by completing the associated character’s sidequest. Other tools, such as a teleportation device, factor more specifically into the main plotline. Story informs gameplay, gameplay informs story. It’s a satisfying loop that helps carry the story along. The more you learn about what’s happening in South Park, the better equipped you become to influence the happenings there.

This is Parker and Stone operating at their level best as storytellers, capably adapting their style to the unique demands of a video game narrative.

Obsidian keeps combat engaging with timed button-press mechanics that help to enhance the turn-based combat, which serves to improve or debilitate your offensive and defensive capabilities. You’ve got to hit a button at just the right moment to deal the most damage, or block a portion of an incoming attack. You also get to choose what kind of attack you’d like to deliver (depending on the weapon you’ve got equipped), be it light, heavy, or magic-enhanced (read: fart-enhanced). While the battles are all still fundamentally turn-based, the timing requirement keeps you present and invested in every moment.

Outside of combat, it’s the frequently ridiculous open world of South Park that keeps you on the hook. The Stick of Truth‘s pacing is nearly perfect in comparison to the size and scope of the world. The 10-15 hour story is peppered with unlocks that gradually open up access to an increasing array of familiar locations, from Kenny’s house to Canada. There’s plenty of loot and sellable junk to be found, but longtime watchers especially will dig the unending torrent of Easter eggs that spill out of every new location. There’s similar joy to be had in meeting and forming relationships with a diverse cast of characters pulled from across the series’ 17 (and counting) seasons.

Making friends in The Stick of Truth is more than just a tool of the narrative. It informs the game’s character progression as well, with new combat-enhancing Feats that unlock when your total Friends List count hits certain milestones. There’s also a more traditional experience point-based leveling system, through which you upgrade the four main abilities for your chosen class (Fighter, Mage, Thief, and Jew). Separate from all of that is an assortment of other unlockable skills and tools – including fart-powered magic – that better enables you to collect treasure and vanquish enemies scattered throughout the open world.

The user interface isn’t without its problems. While your inventory never grows too large, there’s no convenient way to sort through different types of items you’ve collected. This is especially frustrating when you want to improve your weapons and armor; it’s easy enough to swap Weapon Strap-Ons and Equipment Patches in and out, but you’ve got to scroll through each one individually in order to see what it does.

The biggest stumble, however, comes during the later hours, when it becomes clear that Obsidian didn’t build anything into this RPG for players that crave endgame content. While you’ve got to forgive the absence of post-credits quests or a New Game+ or any other traditional extended play hooks – Obsidian’s got the right to craft a game according to its particular vision, after all – it’s harder to overlook glaring design shortcomings that unfairly prevent players from hitting 100-percent completion.

There’s no warning when you’re leaving certain dungeons that you’ll never be able to return to them, for example. Miss a collectible, like one of the 30 Chinpokomon you’re tasked with finding, and you won’t be able to come back for it later. Plenty of RPGs make that mistake, but many of those are at least mindful of the player. It’s an unfortunate oversight for what seems like a very solvable problem. Even if you’re not going to let players backtrack through certain dungeons, you can at least warn them before they leave.

An issue like this reinforces a deeper impression that The Stick of Truth feels incomplete. It feels like Obsidian (and presumably Parker/Stone) had a lengthier story in mind. The latter half of the game even seems to set up a three-part quest in which you bring a trio of factions over to fight for your side, only to inexplicably pull back from that. After completing an extended questline for the first of those factions, an offhand, unexplained remark in a cutscene informs you that the other two joined as well. Then it’s off to the final dungeon to complete the game. The otherwise perfect pacing stumbles badly here around an unexpected lack of exposition.

It’s extremely telling that the biggest complaint we can level at Obsidian’s efforts is that there’s not more game to play. South Park: The Stick of Truth is a tremendous effort, and quite possibly the best work the studio has ever done. None of the shortcomings described above impact the good times in any real way. South Park: The Stick of Truth may not get everything right, but you’re laughing so hard most of the time that you won’t even notice.

This game was reviewed on a first-generation Alienware X51 gaming PC using a copy provided by Ubisoft.