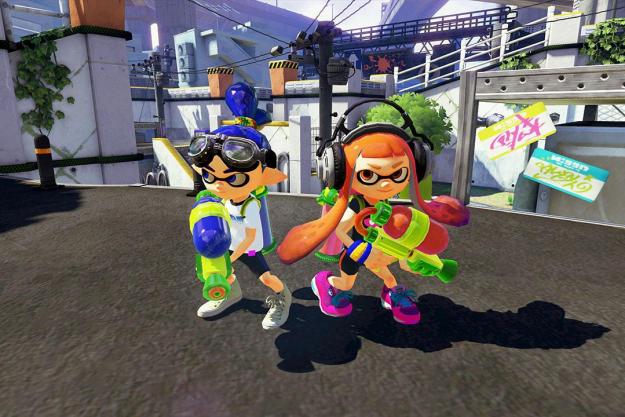 “Splatoon is a beautiful new twist on the shooting genre, but lacks team chat and other modern norms.”

Splatoon, metaphorically speaking, is Nintendo dipping its toes into the water of competitive online shooters. In many ways, it’s as shocking of a change to shooter conventions as Super Mario 64 was to platformers back in 1996. In other ways however, it comes up disappointingly short, especially given its online-focused design.

First, the good news: Splatoon is absolutely worth a look, whether you’ve been fragging foes since the days of Doom or you’ve never aimed down iron sights in your entire life. It’s accessible, non-intimidating, and tweaks the standard team-based kill-a-thons you may be used to into something unlike anything else I’ve ever played.

It’s also freaking adorable; this is a world filled with bright colors, a variety of sea creature characters, upbeat techno music and bad wordplay. How bad? Sisters Callie and Marie (get it?) welcome you every time you boot the game, and the cat who judges matches insists that you can become a positively “purrfect” competitor. It may suck to lose, but Splatoon makes it very difficult to stay angry.

And while we’re on the topic of how happy this game is, Nintendo really ought to seek out a partnership with Nickelodeon, because Splatoon could be the intellectual property that brings back the network’s famous green slime.

There’s not much in the way of story in Splatoon. There’s a single-player mode that focuses on restoring power to the city of Inkopolis, but the main course is the competitive scene. You see, the squid-people citizens of Inkopolis have become obsessed with ink battles – 4v4 conflicts where teams seek to cover more of a given map with their color of ink than their opponents (or, when you’re ranked high enough, covering specific areas with ink longer than the opposing team). Getting covered head-to-tentacle in an enemy’s ink will “splat” an Inkling and force them to respawn, but the goal is still less about painting your targets and more about painting the walls (and floors, and crates, and, and, and).

Despite the game’s non-violent leanings, the feel of a match in Splatoon is not too far removed from that of a modern shooter. Think of it this way: In a game like Call of Duty, yes, you should be focused on shooting the other team, but you should also be focused on where your teammates are, getting to where you need to be, your line of sight to the enemy (and theirs to you), and which routes are being used by whom. These strategies and higher-level thinking are what separate pros from amateurs.

What Splatoon does so wonderfully is parse these more complicated thought processes into gameplay, deconstructing the shooter genre’s core tenets and rebuilding them into something fresh. You’ll know, for example, which routes your foes are using, because a glance at the Wii U GamePad shows in real time the paint streaks they’re leaving across the map. You might get separated from your teammates, but again the GamePad can help you, showing you where they are and allowing to make a quick super-jump to their location with a tap on the screen.

These are the same concepts you might use in a more realistic shooter – learning enemy routes, rallying to a teammate under siege, etc – but Splatoon implements them in such a way that it’s immediate and, more importantly, fun. Not once did I experience the “where did that guy come from” frustration that shooters can often produce, because the game literally painted my foes’ routes.

Splatoon has the potential to be as much of a crowd-pleasing eSport title as Super Smash Bros.

Along with these clever systems, I was surprised by the variety of playstyles Splatoon supports. There’s the standard ink-shooting automatic rifle, but there are also sniper-style ink shooters, ink rollers, ink bazookas, ink sticky bombs, even ink tornadoes. Each weapon comes with a sub-weapon and special ability designed to complement its strengths while providing enough weaknesses so as to preserve balance, and there are plenty to unlock. Some are even hiding elsewhere in the game, waiting to be discovered.

I personally enjoyed the Splat Roller, as not only did it allow for a nice, even coat of a map’s surface, but also came with bombs that could stick to walls and a sound-blasting special weapon that eviscerated enemies who got in its path. So yes, I felt like a steamrolling badass with my oversized paint roller and boombox. Such is the power of Splatoon.

There’s also a customization system that allows players to tweak their avatar’s abilities so that they might move faster through their own team’s ink, refill their ink tanks faster, withstand more damage, or many other options. Unfortunately, these customizations are also tied to aesthetic changes, so if you like an item’s stat bonuses but not its appearance – or vice versa – you might be out of luck.

I say “might” because technically there are ways to mix and match item appearances and stat boosts, but it’s a convoluted and time-consuming process. Splatoon could stand to make customization more robust. After all, I already know that my Inkling girl is the prettiest on the block, but I want everyone else to know she’s a special squid-flake.

It may seem that all of the building blocks of a great game are here, and were Splatoon an offline-only affair they would be. However, by focusing on the online experience, Nintendo has given themselves a few extra challenges – challenges that, unfortunately, Splatoon fails.

It is simply unacceptable that in 2015 Nintendo has seen fit to omit voice chat from a team-based, competitive, online game. Splatoon has the potential to be as much of a crowd-pleasing eSport title as Super Smash Bros., but without native voice support, I fear that only the most diehard of fans will have the patience and interest in pursuing workarounds so that they can coordinate with their team. Even casual play suffers, as the Splatoon playing fields can feel lonesome and quiet.

There’s also no easy way to partner up with someone who did well in your last match and join them for future battles, or to create clans. I have no doubt that a subreddit will form for precisely this purpose, but it shouldn’t have to come to that. Splatoon should support voice chat – even as an opt-in, opt-out function – and player matchmaking. It doesn’t, and is weaker for it.

As fun as it is, and as much as it twists genre conventions in fresh ways, Splatoon is proof that Nintendo either doesn’t really “get” online competitive play, or that it if it does, it refuses to incorporate standard modern features. I’m not really sure which scenario is worse. This is a game, a new intellectual property, that will live and die by its community, yet community tools are almost wholly absent. It’s baffling.

The bright side is that Nintendo has committed itself to continual updates for Splatoon, including new maps, weapons and modes. It’s not totally unreasonable to hope that the community features might be on their way. For now though, it’s a disappointment.

At the beginning of this review, I said that Splatoon was Nintendo’s way of dipping their toes into the pool of competitive online gaming. And what a dip it is: colorful, fun, unexpected and satisfying. Now if only Nintendo would take off its arm floaties and dive in.

This game was reviewed on the Wii U with a copy provided by Nintendo.