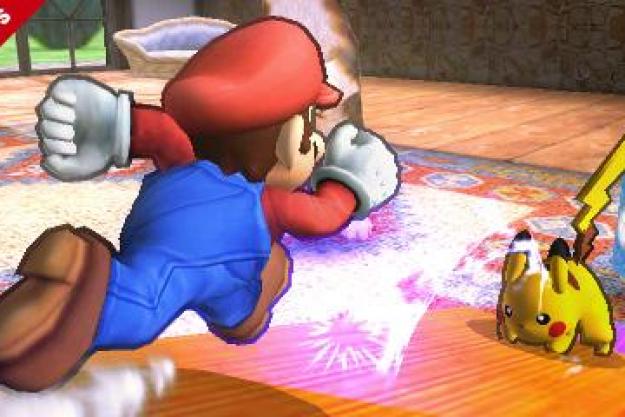 With a bemused look on his face, tongue wagging, a dog saunters across the screen of a Game Boy and slaps a king across the face with a duck. One great ape in a tie picks up a metal baseball bat and hits a blue robot so hard he flies away, leaving nothing behind but light and smoke. A woman in blue fetish heels whips a man in a pink sweat suit and green boxing gloves while an amorphous pink blob swallows an elf and steals his hat. Planking, 2011’s most irritating meme, is redeemed as the celebratory dance of tall, squawking plumber.

The bigger Super Smash Bros. has gotten over the past 15 years, the more it’s felt distinctly like a console game. One of those Nintendo works proving how playing in a room full of people staring at a giant screen is still a potent experience. Just the name Super Smash Bros. for Nintendo 3DS should be a misnomer! Smash isn’t meant for handhelds! This game proves otherwise, a beautifully mad fighter that both embodies the best of the series’ past while adding to it in ways that feel essential. Smash 3DS isn’t perfect, but it comes very close.

Basics remain the same: Up to four players pick from 48 characters culled from more than 30 years of gaming history on Nintendo platforms, and they beat the ever-loving crap out of each other. Unlike fighters in the Street Fighter II mold which use many buttons for pulling off a variety of martial arts moves, Smash keeps it simple. One button each for blocking, holding, jumping, attacking, or using special moves. Shifting the little slide pad on the 3DS not only moves your fighter, but alters how you strike enemies including the essentials “smashes.”

Victory in standard Smash 3DS comes when you knock your opponents out of the arena, not when you drain a health bar. The more punishment a foe takes, the easier it is to homerun derby them into the distance. So if you’re Princess Peach, you can slap around Bowser by slamming the A button then blast him to the moon by holding down A and the direction you want to send him flying.

Smash fights have never felt better. Super Smash Bros. Brawl on Wii slowed down the action to a problematic degree, but Smash 3DS feels speedy and direct, with responsive control whether you’re playing a heavy like King Dedede or a speedy bantam weight like Zero Suit Samus.

How distinct these fighters feel from one another given the sheer volume of them is the most impressive aspect of Smash 3DS. Little Mac from Nintendo’s ancient Punch-Out!! boxing game is fast, but best on the ground where he can unleash a brutal flurry of punches. He’s completely different from Shulk, the heartthrob lead from Wii RPG Xenoblade, who attacks with a sword like classic Smasher Link but whose specials are all stat booster. Meanwhile, Duck Hunt, the previously mentioned dog with his little duck pal and one of 12 characters that has to be unlocked, is great at keeping opponents back by summoning gunslingers from Nintendo’s all but forgotten Wild Gunman.

Every character, including welcome visitors like Pac-man and Mega Man from outside the Nintendo pantheon, feels different but equally useful. It all depends on your style of play. The simplicity and speed of the basic fighting makes it easy to taste test different characters to see what you like.

Mii Fighters offer even more options for personal preference. There are actually 51 fighters counting the swordsman, fighter, and gunner templates you can use to make your personal Mii avatar into a combatant, and while they feel similar to other characters, their moves, stats, and costumes (new gear’s earned by playing various solo modes) can be switched to suit your taste. A fighter Mii may initially feel like Little Mac, but throw a Princess Zelda wig on him and give him a down-strike punch special and he’ll feel like he’s all yours.

How distinct these fighters feel from one another given the sheer volume of them is the most impressive aspect of Smash 3DS.

This crazy variety extends to every inch of the game. After a dozen hours of play – approximately how long it took to unlock all the hidden characters for this review – new Assist Trophy characters (helpers summoned with an item) kept popping up. Playing through the plethora of single-player modes like All-Star, which pits you against the stars based on their chronological appearances, home run derby, or a new target smashing game that bears more than a passing resemblance to Angry Birds gives Smash 3DS the same feeling of abundant quality that made Super Smash Bros. Melee on GameCube the previous high water mark for the series.

For those waiting on the Wii U version to recapture that big picture Smash experience, Smash 3DS does offer unique hooks. Stages like a Game Boy recreation of the original Kirby’s Dream Land, a rumbling train from The Legend of Zelda: Spirit Tracks, and most others in the game are exclusive to this version only. So too is Smash Run, an odd, not entirely successful answer to past game’s adventure modes.

Smash Run encourages using customized versions of fighters, gussied up with the same stat-altering gear as Mii Fighters, to take on a five-minute attack on a multi-tiered dungeon where you fight enemies from classic games and collect trophies and new items. When the timer runs out, you face off against three other fighters, but not necessarily in a regular brawl. Sometimes it’s a brawl, but sometimes it’s a race to the top of a unique stage.

Smash Run’s an interesting diversion, and it encourages experimenting with the characters in unique ways that you can’t in standard fights, but it’s often incredibly confusing. The dungeon itself tosses you around. Walk into one room and the floor will rush into the sky. Special enemies and treasure appear for limited windows of time, but the rewards for hunting them down feel thin.

Director Masahiro Sakurai said he was taking the old style of single-player game out of the new Smash because the short CG movies in previous games could just be seen on YouTube rather than earned in the game. They were a tangible reward, though, something Smash Run is missing compared to just the basic single-player modes here. Speaking of YouTube, Smash 3DS feels sadly antiquated in many ways, even compared to recent Nintendo games. Anyone expecting social tools like Mario Kart 8‘s easy YouTube uploading will be disappointed by these limited screen and replay capturing tools.

Like Mario Kart 8, though, it is simple to play Smash 3DS with others. Setting up a local match with nearby 3DS owners takes just seconds, while hopping into an online match with friends or random folks online is just a few menu selections away after powering up the game.

Simple as it is, players looking for competitive perfection may be disappointed. Playing with Japanese players ahead of the US release resulted in painful slowdown and numerous network drops. Playing with others located online in the U.S. and locally was more successful, but even then in both cases there were slight hiccups in the action, flashes when the game would pause before continuing. For anyone who just loves a light game of absurd cartoon action, it’s perfectly functional. Serious fighting game nuts and tournament fighters will cry foul.

For each of these blemishes, Smash 3DS offers up an inherently unique vision of chaos. Nowhere else can you watch a little yellow ball man throw a fire hydrant at a dragon. Nowhere else will you find elven royalty throwing a trophy at a dinosaur to conjure up a belligerent, gun-toting hedgehog. Super Smash Bros. for Nintendo 3DS is a unique, powerful venue for very strange fun.