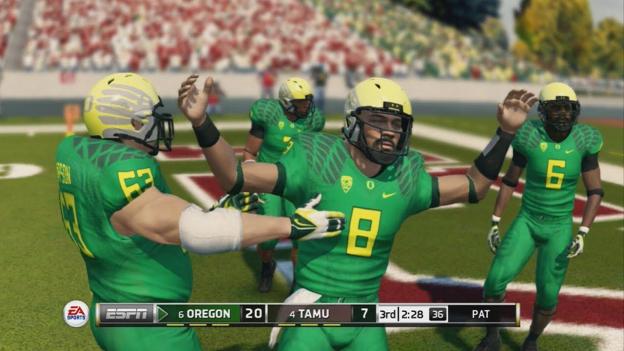 After a long and fruitful relationship that spawned 17 annual games, the NCAA announced that it will not renew its licensing deal with Electronic Arts. The contract expires in June 2014, but according to the nature of the contract, the NCAA was required to give notice now so EA Sports could plan for the future accordingly. For fans of the series, that makes NCAA Football 14 the last game in the franchise – or at least the last game to use that particular name.

“We are confident in our legal position regarding the use of our trademarks in video games,” the statement read. “But given the current business climate and costs of litigation, we determined participating in this game is not in the best interests of the NCAA.”

The decision comes in the wake of the lawsuit that began with former UCLA basketball player Ed O’Bannon, who is suing the NCAA, Electronic Arts, and the Collegiate Licensing Company over the use of his likeness without permission. O’Bannon has been joined by several others, and is awaiting a judgment that will grant it class action status.

O’Bannon’s case was recently strengthened by the legal victory of former Rutgers quarterback Ryan Hart, who won an appeal against EA that overturns an earlier dismissal, clearing the way for a trial. This stands in contrast to EA’s previous defense that video games, and the use of player likenesses, are protected under the First Amendment. Former Nebraska and Arizona State quarterback Samuel Keller is also involved in an identical appeal, and his case has been combined with O’Bannon’s.

O’Bannon’s lawyers have claimed for months now that they have several current NCAA players ready to join the lawsuit, but are afraid to unless they receive assurances that they could do so without reprisals from the NCAA. The NCAA has said that it would not target student-athletes that came forward, but it also wouldn’t give them any written guarantees.

The NCAA’s decision to not renew the contract presents an interesting legal situation. O’Bannon’s lawsuit was not specifically regarding video games, while Keller’s was. That makes an already complicated lawsuit even more of a quagmire. It does, however, protect the NCAA from any current or future players looking to bring suit against EA.

To further complicate things for EA, the NCAA lawsuits are joined by others revolving around the Madden franchise, including a class action suit from former NFL players, also over the use of their likenesses.

As for the EA Sports college football franchise, the games will continue, and in some ways they are even returning to their roots. The series debuted in 1993 as Bill Walsh College Football, and then after one Bill Walsh sequel spent two years as College Football USA before adopting the NCAA brand for NCAA Football 98. The series will continue regardless, and likely still contain many – if not all – of the current teams.

“Member colleges and universities license their own trademarks and other intellectual property for the video game,” the NCAA stated. “They will have to independently decide whether to continue those business arrangements in the future.”

Judging from the response from EA Sports, doesn’t see that as a huge problem.

“This is simple: EA SPORTS will continue to develop and publish college football games, but we will no longer include the NCAA names and marks,” Andrew Wilson, Executive Vice President for EA Sports responded in a statement. “Our relationship with the Collegiate Licensing Company is strong and we are already working on a new game for next generation consoles which will launch next year and feature the college teams, conferences and all the innovation fans expect from EA SPORTS.”

[UPDATE] Following the news of the split, EA quickly confirmed that it has signed a new, 3-year contract extension with the Collegiate Licensing Company, the body that controls the licensing and marketing rights to 200 colleges, conferences, and Bowl games. It is now up to the individual groups to decide whether or not they will allow EA Sports to feature them in the games. So far more than 150 schools have agreed to the contract extension, but a few (who have not been named) have opted out.

How to pre-order Madden NFL 23: retailers, editions, and bonuses
Walmart Prime Day: Nintendo Switch Sports is 20% off today
It’s time for the Mario Sports games to go free-to-play
The best sports games on Nintendo Switch
Best Xbox One deals and bundles for October 2022
You can play a fan-made Super Mario Bros. 5 in Mario Maker 2 right now
The next game from the Outriders studio loses Take-Two as its publisher
Praise the dark lord, Metal: Hellsinger adds official mod support
Competitive shooter The Finals will make rivals ‘panic,’ devs say
How to link Fortnite accounts
Xbox gets a new camouflaged controller with a matching charger
The Nintendo Switch OLED is only $285 at Amazon, with a catch
Best PS Plus deals for October 2022