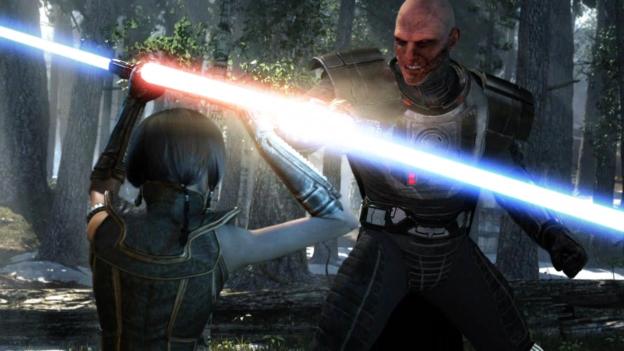 In what is either a decent insight into the one of the year’s biggest licensed properties, or yet another pot shot at a rival, Activision Blizzard CEO, Bobby Kotick, has made headlines again. In an interview with Reuters, when asked his opinion on the upcoming MMORPG, Star Wars: the Old Republic, Kotick cast doubts on the financial soundness behind the game:

“Lucas is going to be the principal beneficiary of the success of Star Wars,” Kotick said. “We’ve been in business with Lucas for a long time and the economics will always accrue to the benefit of Lucas, so I don’t really understand how the economics work for Electronic Arts.”

On its face, the quote is innocuous enough until you consider that EA and Activision Blizzard are fairly bitter rivals, and Blizzard’s top earning property stands to directly suffer from the release of The Old Republic. In fact, a good case could be made that EA decided to fund The Old Republic specifically to go after Blizzard’s World of Warcraft.

One analysis based on a poll, has at least 1.6 million World of Warcraft players leaving the game and switching to The Old Republic, and most see that as a conservative estimate. That would be bad news for Blizzard, who are already trying to stop the bleeding, as more and more players continue to abandon World of Warcraft.

Most estimates suggest that The Old Republic will sell around 2 million copies within its first few months, but the number of copies is only one part of the success. 2 million copies would certainly make EA (who spent upwards of $100 million on The Old Republic) happy, but with games like these, the subscription fees are what make MMORPGs worth the effort. Last year, World of Warcraft generated over $1 billion in revenue for Activision.

“If you look at the history of the people investing in an MMO and achieving success, it’s a small number,” Kotick said.

Kotick’s remarks add fuel to the fire as the rivalry between Activision and EA continues to blaze. Although the two publishers have been going head-to-head for years, this year has been especially public primarily due to the releases of EA’s Battlefield 3 and Activision’s Call of Duty: Modern Warfare 3.

Earlier this year, EA’s CEO, John Riccitiello claimed that Battlefield 3 was “designed to take Call of Duty down,” and that is one of the nicer things he said. Late at E3, Riccitiello said that he wanted Activision’s franchise to “rot from the core.” At that same E3, Kotick was even turned away by EA after trying to play a demo of Battlefield 3. EA’s advertising campaign even featured the tagline “Above and Beyond the Call,” a not so subtle dig at its rival.

Kotick later shot back and inferred that Battlefield 3 wouldn’t make much impact on the console market: “If it’s just a PC title, as it looks like today, that’s a small audience to participate.”

The rivalry between companies goes beyond just games though. Last year after Jason West and Vince Zampella were fired from Infinity War by Activision, they soon founded Respawn Entertainment, recruited several former employees, and quickly signed a deal with EA.

EA stated that they simply jumped at the chance to bring in the talent, but then to add to the other, numerous lawsuits involved in that case, Activision also sued EA for $400 million, claiming that its rival had illegally poached its employees. Activision has even hinted that the deal may have been in the works before West and Zampella were fired.

In the middle of the legal-fu that lawyers will continue to battle over for years to come, Activision quietly shocked the industry by announcing that it had signed a 10-year contract with Bungie Entertainment, makers of the Halo franchise. It was no secret that Bungie was looking for a new deal, but Activision beat out all competitors–including EA.

In the meantime, if The Old Republic does steal gamers from World of Warcraft, at least Activision has the Call of Duty franchise to fall back on. The most recent iteration is a bit of a success, having sold and brain meltingly high number of copies, and earning $775 million in just five days. Regardless, the rivalry continues, and likely won’t be calming down anytime soon.

Knights of the Old Republic is getting a PS5 remake