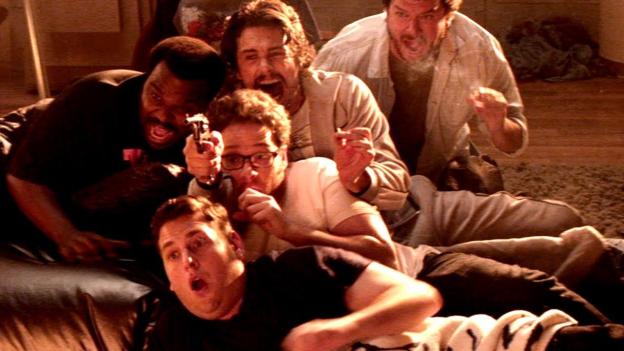 It would be easy to simply write off This is the End as a vanity project. Seth Rogan and writer/producer Evan Goldberg have some success, and suddenly they form a modern day Rat Pack, filled with other up and comers in the comedy scene. They get together, have some laughs, turn in a film, and then go home. On paper it sounds much like the original Ocean’s 11. Unlike that original, mediocre Rat Pack film though, This is the End is very good. In fact, it’s one of the best comedies in years. So naturally there are going to be a lot of people that hate it.

It’s a good thing that people in Hollywood like Rogan and Goldberg. If not, the salaries alone in This is the End would be ruinously high. If every one of the actors that appear, including the ones in cameos, were paid their market value, if they all got together and decided to donate that money to medical research, they could cure death. There are a lot of talented people in this film beyond just the headliners. But once you get past the novelty of dozens of famous people playing caricatures of themselves, the stars really began to shine even beyond the meta-humor.

The heart of the film is the relationship between longtime friends Seth Rogan and Jay Baruchel. Their friendship has been complicated by distance, as Baruchel remains in Canada while Rogan lives in LA and has a new set of friends. When Baruchel comes to town to hang out, Rogan drags him to a housewarming party at James Franco’s. Then the world ends.

The apocalypse comes to LA, and only a handful of partygoers survive the initial destruction. Franco’s new house becomes a sanctuary for Rogan, Baruchel, Franco, Jonah Hill, Craig Robinson, and Danny McBride, all who play themselves. Going into details beyond that would steal some of the surprises, of which there are many. There is a touch of horror thrown as well for good measure.

The characters interact in continually hilarious ways as they make their way through their remaining supplies of water, food, and so many drugs. The film is not for kids in any way, which almost guarantees that kids are going to love it, and remember it fondly for years to come. That alone will probably breed some controversy, but the religious backdrop of the Christian apocalypse will certainly rub some people the wrong way.

This is the End is a comedy classic in the making, and a calling card for all those involved. Rogan and Goldberg in their directorial debut put forth a remarkable offering, but it really comes down to the ensemble cast, all of whom have moments that stand out. They also play off their own images brilliantly. Jonah Hill is a nice guy, almost to a pathological degree; Danny McBride is selfish on a whole new level; Craig Robinson is sweeter than he wants to admit; James Franco is every bad thing ever said about James Franco. It’s Rogan and Baruchel that have the most significant story arc though.

Beneath the apocalyptic tale, it is a story about their friendship. It isn’t heavy handed, and generally just helps to fuel the comedy. It just gives the audience a central focus, especially when the third act begins and the film goes in yet another, unpredictable (but not unwelcome) direction. This, by the way, leads to one of the best and most surprising cameos in recent years. You’ll know it when you see it.

If you like all the actors in the film, then your respect for them will only grow. If you are on the fence about them, however, they will win you back; especially Rogan and Franco, who allow themselves to be the butt of so, so many jokes. And not just the random “Rogan is fat” or “Franco is pretentious” jokes, but some really scathing portrayals.

And sweet gods, then there’s Michal Cera in a small, but incredibly memorable role. Emma Thompson also has a few important moments, but Cera goes all in with his performance.

The bottom line is that This is the End is hilarious from start to finish. There are things that could be easily pointed to as proof of that, but the less you know about the jokes, the better. A word of advice though: if you plan to see it, do it sooner rather than later. People will be quoting lines from it ad nauseam very soon.

The rampant drug use and general bad behavior could make This is the End a lightning rod for criticism. The religious themes that are hinted at are sure to draw some ire as well, even though they are little more than background and never really delved into. That won’t matter to some who will take it as an opportunity to yell at something they disagree with. Ignore them.

This is the End is the funniest movie of the year, and one of the funniest in years. There isn’t anything that is really close to it. Go see it.