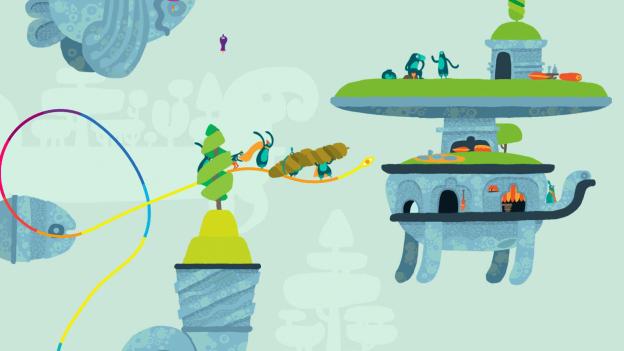 Hohokum is like a playable journey into The Beatles’ Pepperland. The minimalist surrealism of its environments pop with color and life while the player’s movements through the 2D virtual space create a symphony of ear-pleasing tones. It’s the sort of experience that you could see flowing out the creative minds at Sony’s Santa Monica Studio, which assisted  UK developer Honeyslug Games and artist Richard Hogg, the game’s director and visual architect.

Disruptive game design. The only story in Hohokum is the one that you author in your own head as you play. This is an atypical game that ditches narrative structure in favor of a series of loosely defined goals, a simple control scheme, and a colorful lineup of content-rich worlds. The design is structured around rendering exploration and discovery as their own rewards. There are things to do and accomplish in each of the game’s discrete worlds, but the particulars of solving a specific puzzle depend entirely on experimentation.

In one world that we explored during our hands-on, a lush, alien sky-jungle floats serenely against the backdrop of a blue sky peppered with white clouds. The uppermost region of this space is dotted with hovering islands that mark out the boundaries of an alien settlement. There is a community of kite-flyers, and it’s up to you, as the game’s multi-colored flying snake (dubbed ” the Long Mover”), to find the kites and carry each resident to a series of nearby hilltops.

That probably doesn’t make a whole lot of sense when you read it. It’s okay. Hohokum isn’t the sort of game that one can easily describe. Better to simply sit down, pick up a controller, and let it wash over you.

The Long Mover’s moves. The Long Mover is best described as a rainbow-colored, flying snake. You’ve got full 360-degree movement within the 2D space via your controller’s left analog stick. The X and O buttons speed up and slow down, respectively. It’s possible to move even faster as well by tapping L1 and R1 quickly, which makes the Long Mover wiggle quickly through each space until it brushes up against one solid mass or another.

And… well… that’s pretty much it as far as the control scheme goes. Touch inputs are planned for the PlayStation 4 and PlayStation Vita versions of the game, though there’s no word on SIXAXIS support for PlayStation 3. None of the non-standard control options are in place yet either, so there’s nothing to say for now on how well they work. All that said, the basic gamepad controls are easy to learn and fun to play with, and that’s what is most important.

A musical exploration. The worlds of Hohokum, all of which are linked together by a central hub, are best viewed as musical instruments. Just about any solid surface that the Long Mover can come into contact with is interactive in some way. Touching even a single leaf on an alien tree adds a new layer to the airy background music. A symphony of electronic blips and bloops follows each of the Long Mover’s twists through Hohokum‘s worlds.

Hohokum isn’t the sort of game that one can easily describe. Better to simply sit down, pick up a controller, and let it wash over you.

Each world is also completely different from the last. The above-mentioned floating jungle is all trees and dangling vines and small, domed huts. Another seemingly featureless world dotted with large, solid-blue bubbles turns into an undersea wonderland as the Long Mover breaches the perimeter of what turn out to be circular zones of water. Wherever you go, the goal remains the same: explore and discover at your own pace, without any thought for Game Over screens or high scores or health bars.

Magical mystery tour. Hohokum‘s various worlds are all visually distinct, but there’s a singular artistic vision that clear ties them all together. This is where Hogg comes in. His work is reminiscent of the most psychedelic selections from the Peter Max archives. Pixeljunk’s work, particular Pixeljunk Eden, provides a good starting point for comparisons, but the more “out there” examples that you discover as you delve deeper into Hohokum‘s world feel much more in line with the world of Pepperland from The Beatles’ Yellow Submarine.

Whatever you peg Hogg’s inspiration to, the result is an eye-catching swirl of color and shapely designs, all of which transform in real time as you guide Long Mover to and fro around each space. Hohokum is undeniably gorgeous in its own minimal way, screaming “indie art game” from every pixel that bleeds across the screen.

Hohokum won’t be the sort of game that millions flock to for its photorealistic vistas and face-searing explosions, but it immediately asserts itself as an inventive playground of color and sound. It skips traditional storytelling in favor of creative interactivity, and that’s perfectly fine. You might not know what you’re doing when you first pick this one up, but it quickly becomes clear that that’s sort of the whole point. We look forward to seeing how the rest of these worlds unfurl when Hohokum arrives for PS3, PS4, and PS Vita in 2014.