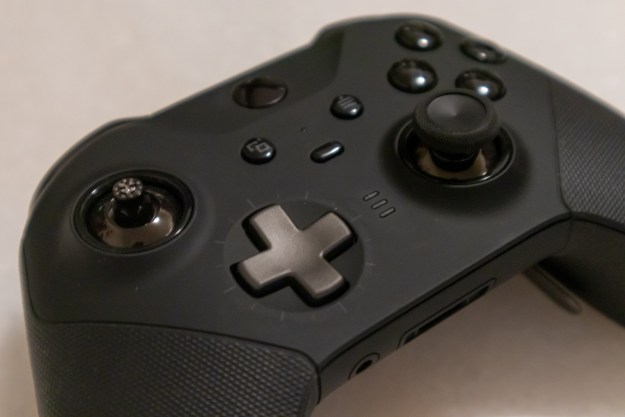 “The Xbox Elite Controller Series 2 is the best game controller we've ever used.”

Microsoft’s standard Xbox One controller lacks the fancy touch bar of the PS4’s DualShock 4 or the “HD Rumble” of the Nintendo Switch Joy-Con, but its reliability and design make it undeniably great. There is very little to improve – either by correcting features or adding new ones – but Microsoft found a way with the Xbox Elite Controller Series 2.

With a price tag to match its impressive design and build quality, it costs the equivalent of three full-priced Xbox Series X games. Still, it’s easy to see why within a few minutes of using it. This is the best video game controller ever made, and an easy recommendation for competitive players.

The Xbox Elite Controller Series 2 is based on the regular Xbox One controller, so the button and stick placement feel familiar. Both shoulder buttons and the triggers feel almost identical to the standard Xbox One controller, in terms of travel distance and required pressure.

The ports on the base of the controller mirror the normal model, with a 3.5mm jack as well as the proprietary port that shipped with the 2013 console’s controllers. Any accessories meant for the standard controller should fit it without issue, provided they don’t need to wrap around the back.

This is the best video game controller ever made.

Though the charging port is still next to the syncing button, it’s USB-C instead of micro-USB, so cable compatibility may be an issue.

Looks can be deceiving, and despite resembling and feeling like a standard Xbox One controller upon first inspection, the Xbox Elite Controller Series 2 offers a ton of bells and whistles you won’t find on the standard design.

Immediately, players will notice the directional pad is circular, which is odd. Luckily, it’s removable and can be replaced with a traditional cross-style directional pad. Once switched, it becomes the best directional pad I’ve ever used, with a firm tactile click that doesn’t require excessive force. This design will be used for the upcoming Xbox Series X console, so it’ll be more common by the end of 2020.

Much like third-party offerings such as the Scuf Vantage, the Xbox Elite Controller Series 2 features removable analog sticks held in place by magnets. They’re easy to pop off and replace with the alternatives included in the carrying case. Players who prefer a convex design can easily switch, as can those who want a shorter or taller stick.

What’s more impressive than the options offered, however, is the adjustable tension dial underneath. Using an included key, players can give their sticks looser or tighter movement to fit their preference. I found them slightly loose by default, but fixing this took less than a minute and required no disassembly aside from popping off the stick.

The triggers themselves can’t have their tension adjusted like the Scuf Vantage, but they do have a three-level hair-trigger system. By default, they travel about as far as the standard controller, but flipping the switch can cut this down by more than half. For first-person shooters, a short travel distance can make players more competitive, and it’s possible to leave them in different settings.

Sticking with Microsoft’s first Elite Controller design, the Series 2 features four removable paddles on its back. By default, they’re programmed to each of the four face buttons, which lets you keep your thumbs on the analog sticks while performing other functions. Using the Xbox Accessories app on the Xbox One or PC, these can be reprogrammed to other functions, including a button press from the analog sticks.

Several profiles can be saved for particular games or multiple users, and holding in the special profile button on the front of the controller will disable the paddles completely. This came in handy when playing hectic games like Call of Duty: Modern Warfare, so I didn’t have to worry about accidentally swapping a weapon by bumping a paddle. Removing the paddles is a breeze since they’re also magnetically connected. If a guest is opposed to them, removing them only takes a few seconds.

The paddles can be completely reprogrammed.

Because the paddles function by hitting a smaller hidden button underneath, they leave a tiny hole when removed, but it’s hardly noticeable. No wires show inside and it’s unlikely to cause any dust or crumb buildup if they’re left out permanently. It may seem silly to spend almost $200 on a fancy controller and remove its biggest feature, but customization is valued above all else.

The carry case is great

A carrying case usually isn’t given a second thought once the controller is removed, but Microsoft went all out with the Xbox Elite Controller Series 2. The case features magnetic slots for all of the included accessories. Aside from easy storage, it improves transporting the controller without worrying if any of the small pieces will start rolling around or fall out when opening the case.

The case features slots for all of the included accessories.

Plus, it has a built-in charging dock and hidden wire port, meaning you won’t have to remove the controller to charge it. While it’s not a necessity, it does add a nice bit of flair to help justify the cost.

Yes, it’s expensive, but the Xbox Elite Controller Series 2 is a phenomenal controller. You’ll find it difficult to use anything else after spending a few play sessions with it, and we were hard-pressed to find any flaws.

Provided that price isn’t an issue, there’s no a better alternative.

The battery can last up to 40 hours on a full charge. The controller feels built to withstand abuse, and significantly tougher than the standard Xbox One controller.

Yes, unless you are a very casual player who doesn’t need or care about the bells and whistles. It is the best video game controller I’ve ever used.