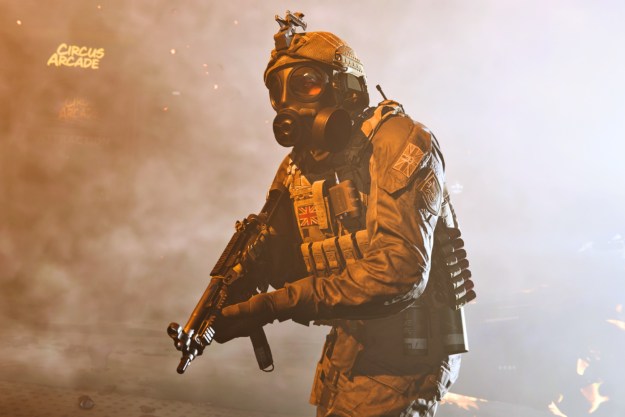 “Call of Duty: Modern Warfare has an outstanding campaign, and the multiplayer will have you itching to play just one more game over, and over, and over again.”

Call of Duty 4: Modern Warfare ushered the series into prominence in a big way with its cinematic campaign and addictive competitive multiplayer. More recently, however, developer Infinity Ward has become a weak link in Activision’s roster of studios, failing to deliver worthwhile changes in its last two games.

Call of Duty: Modern Warfare acts as a reboot of sorts. Characters from the previous trilogy appear, but not as the same person they were in another timeline. A few previous events even appear to have still taken place. Make no mistake though – isn’t interested in retelling stories. It takes a much darker and more grounded approach to warfare than its predecessors. Nuclear explosions are replaced by levels where you play as a prisoner being waterboarded, or an SAS officer caught in a suicide attack that kills innocent civilians.

Though there are a few moments that push the boundaries of good taste, such as having you use a terrorist’s family as leverage, Infinity Ward’s new take on modern warfare is largely successful. Captain John Price, despite having a different voice actor, remains an entertaining character. The freedom fighter Farah Karim gives us an opportunity to see the conflict from the viewpoint of a Urikstanian freedom fighter, rather than the American and British troops we’ve almost always seen in the past.

Present-day missions are broken up by flashback sequences, which help to give more context to Farah’s struggles as well as the seemingly endless conflict that has engulfed the fictional country of Urzikstan. This includes her relationship with a particularly sadistic Russian commander, though he does come across as a bit of an evil caricature. Other villains, including one who could play a bigger role in a sequel, feel more like real people with clear, believable motivations.

Previous Infinity Ward games, particularly Call of Duty 4, expertly blended quiet, precise stealth with all-out chaos, and the studio clearly hasn’t lost its touch after all these years. Several of Modern Warfare’s best campaign moments involve silently entering the bottom of a building, popping off a few rounds into enemies, and moving up before their squad even knows what happened. Eventually, you’ll be discovered and have to “go loud,” prompting you to blast incoming targets with assault rifles, pistols, shotguns, grenades, unmanned drones, or Molotov cocktails.

What makes Modern Warfare so impressive is that you’re never left wondering when the next moment of quiet or all-out chaos will occur. The campaign spreads them out evenly. The only crime Modern Warfare’s campaign commits is a premature end, as themes such as the negative impact of Western foreign policy are mentioned, but not fully explored by the time the credits roll.

Call of Duty: Infinite Warfare’s competitive multiplayer was an overwhelming mess of ideas that didn’t understand why people liked the series in the first place. Infinity Ward clearly learned from these mistakes, as Modern Warfare not only delivers excellent moment-to-moment gunplay between players, but also introduces several new modes that play to the series’ strengths.

Classics like Team Deathmatch and Domination remain, and the maps available at launch offer many places to maneuver around your enemies, plan ambushes, or escape when things get dire. Being able to reload your weapon while aiming means you always have full situational awareness, and paying attention to footsteps has never been more important for locating enemies before they locate you.

Killstreaks feel less powerful, too, so you’re less likely to throw your controller in rage because an enemy killed you with an airstrike from halfway across the map.

The new modes introduced in Modern Warfare feel right at home, too. Cyber Attack is a tense race to destroy an enemy objective via a central device, and the multi-round Gunfight levels the playing field in two-versus-two battle that gives everyone the same loadout.

Modern Warfare has plenty of challenges and optional missions to complete, so you’re unlocking new gear the whole time. The only thing that might interrupt your play is a crash. On Xbox One X, players have been experienced full console crashes at launch. It happened to me right in the middle of a match.

By far the largest addition to competitive multiplayer is Ground War. It’s essentially Call of Duty’s take on the Battlefield staple Conquest. Up to 32 players on each side battle for possession of several key locations on an enormous map, complete with vehicles like armored personnel carriers and helicopters.

Mixing a game mode like this with traditional Call of Duty weapons and kill-streaks shouldn’t work so well, but it just does, and crafting the perfect loadout to help your team adds another element of strategy.

One component of Call of Duty: Modern Warfare that isn’t so successful is the Spec Ops cooperative mode. Split across multiple missions and taking place after the campaign, Spec Ops is set in semi-open environments and tasks you with completing several different objectives as a team.

These include things like hacking terminals and rescuing high-value targets, and there are a ton of enemies thrown at you regardless of the situation. We encountered some bugs with characters occasionally not appearing, but our main issue with Spec Ops came down to pacing.

Running across giant environments and fighting waves upon waves of enemies just doesn’t feel like Call of Duty. It was ambitious for Infinity Ward to try something wholly different from the campaign, and I was thankful that it wasn’t yet another Zombies mode, but Spec Ops just doesn’t fit with the rest of the game.

Activision plans to support Call of Duty: Modern Warfare with a battle pass that will give players challenges and additional items. There won’t be any loot boxes, and all the goods you can unlock will be known in advance. Right now, only a $10 Call of Duty Endowment bundle is available to purchase in the store, and things like skins and emblems are all available entirely through normal play.

The progression system is also very straightforward, which should alleviate concerns about it being monetized later. Want to earn a particular gun? Just meet the level requirement, then use it in battle to unlock attachments and perks for it.

Be warned, however, that Activision has introduced additional micro-transactions in its games after launch. It’s possible that the company will do the same here.

Infinity Ward didn’t try to just replicate the original three Modern Warfare games when developing 2019’s Call of Duty: Modern Warfare, instead making a title that invokes plenty of nostalgia while also forging its own path. The gritty and more grounded campaign and meat-and-potatoes competitive multiplayer are exactly what I’ve wanted from the series.

No modern military shooter provides the same mix of exhilarating campaign and multiplayer action as Call of Duty: Modern Warfare.

If you do want more choices, though, check out our favorite games of 2019. Or if you’re on a budget, read up on our favorite free FPS games.

We completed the campaign in just under 6 hours. Free post-launch content should help to make the competitive multiplayer last for months, if not a full year.

Yes, both if you’re nostalgic for the original Modern Warfare games or want a shooter that can keep you entertained alone and with other players.

Topics
10 best Elden Ring mods
Marvel’s Avengers to be delisted in September as support winds down
Warzone 2.0 Season 2: release date, features, and Resurgence mode
Starfield: release date, trailers, gameplay, and more
The best Pokémon Scarlet and Violet mods
The best ultrawide monitors for 2023
The best Xbox One controllers for 2023
The best SSDs for 2023
WWE 2K23 brings the pain with John Cena, Cody Rhodes, and Bad Bunny
The best gaming PCs for 2023: Dell, Origin, Lenovo, and more
You can turn off Frey and Cuff’s banter in Forspoken
The best Xbox Series X and Series S deals for January 2023
This Alienware gaming PC with an RTX 3090 is $520 off right now