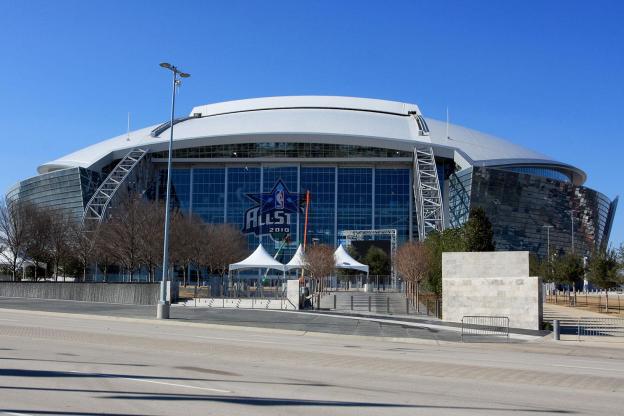 Sure, the Palace in Dallas, newly rechristened AT&T Stadium in a naming rights deal worth upwards of $19 million a year, may be a $1.2 billion monument to excess to Texas-style size and excess. But that doesn’t doesn’t mean the high-end gadgetry inside can’t be put to good use.

This season, in conjunction with Replay Technologies Inc., the Cowboys and NBC Sports will introduce 360-degree, “FreeD” replay views for red-zone action (from the 20-yard line to the end zone), available for viewers watching NBC’s football broadcasts, local Cowboys broadcasts in Dallas, and those inside the stadium staring up at 23,040 square feet of center-hung LED Diamond Vision display. Twenty four cameras – 12 on each side of the field – placed strategically allow depth and color to be calculated for every pixel within visible coverage. The information is then built into 3D models enabling fully orbiting views without switching cameras. The effect is like a combination of The Matrix-style “bullet time” and the latest Google Maps animations, with any moment of action viewable from almost any conceivable angle.

The system makes its maiden NFL voyage on Sept. 8, when the Cowboys host the New York Giants and will be used again on October 13th when Dallas hosts Robert Griffin III and the Washington Redskins. Fans of college football will also get a taste of FreeD when Notre Dame plays Arizona State on the 5th of October, at AT&T Stadium as part of this year’s “Shamrock Series.”

Fred Gaudelli, producer of “Sunday Night Football” for NBC, told the Television Critics Association Sunday the decision to place the system in Dallas was no accident. “It literally takes a month to install this system,” he said. “Obviously, we’re doing games every single week. So there’s only one system in the world.  We basically had to put it in a stadium we knew we were going to be at least twice. Pray for three times.”

No sport has a larger, more dedicated television watching audience than the NFL. FreeD promises fresh views of a football game’s most critical moments. (Including those soul crushing, late game mistakes that have crippled the Cowboys over the last few years. Call it a double win for those of us who don’t pledge allegiance to America’s Team.) The upcoming NFL season contains a nearly endless array of compelling questions. If, for you, one happens to be “If Tony Romo and The Matrix had a baby, what would it look like?”

Your answer is coming.

CBS will live stream select NFL regular season games, playoffs, and Super Bowl 50
GoPro hits the rink with NHL to deliver live high-def broadcasts from players’ POV
WatchESPN app makes history, frustrates NFL fans, and complicates online sports streaming
SkyHook Mini brings pro-level camera movements to action cams
The Ninja Blender just got a HUGE price cut for Cyber Monday
Capstone Connected launches its smart mirrors built for all lifestyles
The best smart treadmills
This NordicTrack elliptical is $500 off — and it will arrive by Christmas!
Tonal vs. Mirror
How to change the time on a Fitbit
The best exercise tech to help you crush your 2022 fitness goals
Withings Body Scan scales go far beyond just showing your weight
This light bulb can track your sleep and monitor your heart rate from afar