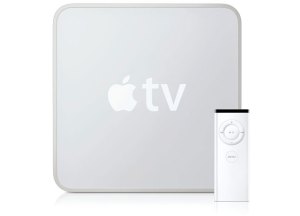 Will Apple follow Google to the flat-screen front? By all reports, it’s starting to look like it. After Google announced in May that it would partner with Intel, Sony and Logitech to produce Google TV, rumors now have Apple retooling the Apple TV to run iOS – but not with full 1080p playback.

Engadget first reported in May that a $99 version of the Apple TV was on the way, running iPhone 4 hardware, with 16GB of internal storage, and pumping out full 1080p video. Now, the same “trusted source” in Cupertino reports that the device is still in the way, but 1080p won’t be part of the equation. Instead, it will output only 720p video, run iOS software, and naturally, be rebranded as the iTV to reflect its transition.

The inclusion of iOS will bring apps, though it’s not clear at this point whether the iTV would access the standing ecosystem of iPhone and iPad apps, or whether apps would need to be completely redeveloped for it. Some streaming media services, like Hulu Plus and Netflix, already offer iOS apps for the iPhone and iPad, which could potentially give a backwards-compatible box a head start with streaming content.

Why no 1080p playback? Allegedly, the A4 processor, which is used in both the iPhone 4 and iPad, can’t handle full 1080p video playback, but not all aspects of the explanation line up. Users in a Chinese forum were able to twist the slower iPhone 3GS into decoding 1080i video, and at least one hacker was able to get the iPad to do it.

The new name could also present a potential snag: The British TV station iTV has already put the name into popular usage and owns many of the associated trademarks, Monster Cable also produces an iPod video accessory known as the iTV Link, and Comcast offers a interactive television service branded iTV.

The last generation of the Apple TV was announced in September, which might mean we’ll hear the official details on the iTV shortly, if Apple follows its typical yearly refresh schedule.