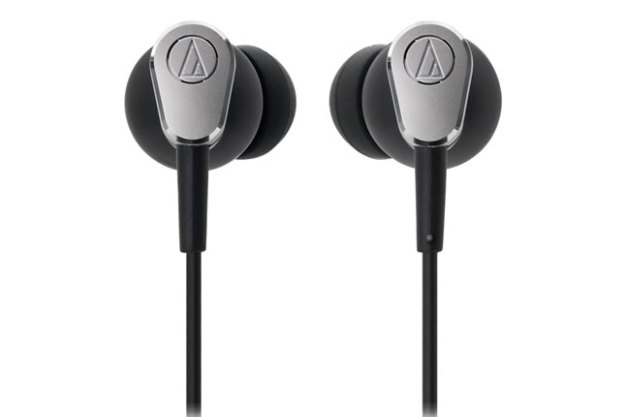 “Their sonic clarity, strength and agility put the Audio-Technica ATH-ANC23 canalphones on par with designer models that cost as much as $300 to $400.”

In-ear headphones and the more recently developed “canalphones” deliver amongst the best available passive noise isolation: Pop them in your ears and you might as well be wearing earplugs. It stands to reason, then, that these designs would also be capable of offering the best possible active noise-cancellation. Yet few in-ear headphones offer active noise cancellation, compared to traditional on-ear or over-ear headphones. Maybe manufacturers figure they already provide a good level of sound isolation, so the addition of active circuitry is perceived as an unnecessary expense.

Audio-Technica resists this inclination with the ATH-ANC23, a pair of active-noise-cancelling canalphones priced a mere $80. We gave the ANC23 a listen and compared them against the likes of the competitive Phiaton PS 20 NC, to see whether or not this product hits the narrow target where sound quality, noise blocking and affordability converge.

The ANC23 are packaged in such a way that you can see almost everything you are getting into through a clear plastic window on the front of the box. The earphones, the noise-cancellation module and a set of foam “Comply” eartips are all within view. The only pieces not visible are the two small and large sized silicone eartips, a velvety storage pouch and an airline adapter. Perhaps not surprisingly, a ¼-inch adapter for use with larger audio equipment is not supplied.

If you aren’t hip to the notion of the “canalphone,” the design takes the in-ear approach and points it forward toward the ear canal. The idea is that the ear-tip can reach a little further down into the ear than straight in-ear headphones, thereby providing a better seal and better noise isolation. Initially, the look and feel takes a little getting used to, but the resulting sound and noise-isolation is usually very good, and we find the design to be plenty comfortable.

Audio-Technica says that inside each of the ear-phones is a small microphone that sends registered ambient noise and routes it to the installed “QuietPoint” circuitry which, in turn, provides a sound wave that is 180 degrees out of phase with the noise surrounding the listener.

Like the Phiaton PS 20 NC, the ANC23 use just one AAA battery that tucks inside a noise-cancelling “control box” outfitted with a power switch, small LED indicator light and shirt clip. Unlike the PS 20 NC, however, Audio-Technica’s ‘phones have a slightly wider, but shorter noise-cancelling case and a volume control. Battery life is rated at about 60 hours of listening, and just like previous Audio-Technica noise-cancelling headphones we’ve tested, the ANC23 operate very well without a battery, a design point missed by many popular manufacturers.

The power button on the control box is easy enough to flip (the Phiaton’s was a pain) and the volume control knob, while extremely small, is smooth enough to use and provides a nice gradient in volume changes. Our only complaint about the ANC23’s design is the oddly proportioned cable lengths. The cable that runs from the earphones to the control box is longer than it needs to be if the unit is to be clipped to a shirt and shorter than it needs to be if it is to be clipped to a belt or pants pocket. Equally frustrating is that the cable linking the control box to the 1/8-inch device plug is too short to allow an attached mobile device to be placed in a pants pocket. We found ourselves wondering where to stick our iPhone as we went about our business while testing the headphones. It usually ended up sitting in a jacket or hoodie pocket, but what to do in the summer when t-shirts and shorts dominate daily wardrobe choices?

As noise-cancellers go, the ANC23 are truly impressive. With no music playing, the ear-phones blocked enough sound that a person speaking to us from five feet away was almost impossible to hear. With music playing, we were blissfully unaware of what noise was going on around us. Audio-Technica claims these in-ears can block up to 90 percent of ambient noise. While we think that quantifying that claim is tough to do, we can say that they were very effective at blocking out annoying fellow bus passengers, wailing two-year old children and baying beagles.

Normally we test headphones predominantly in a quiet environment to ensure we hear the headphones at their best, but with the ANC23, it wasn’t necessary. That said, we did take some time to connect the headphones to a headphone amp and an A/V receiver to see how they fared with audio equipment that offers fidelity on a significantly higher plane than our trusty iPhone.

Since the Audio-Technica ATH-ANC23 compete more or less head-to-head with the Phiaton PS 20 NC, we spent some time swapping between the two as we made our evaluations. With Phiaton’s offering, we were struck by their extremely beefed up low frequency output. It was the sort of bass that seemed exceptional considering it was coming from a headphone. The bass response with the ANC23 was very different. Audio-Technica knows its transducers, and they picked a winning set of drivers to put into these earphones. Bass with the ANC23 was, recording after recording, almost exactly what we thought it should be: balanced, muscular, agile, guttural and downright deep when it needed to be. Whereas the PS 20 NC are a bit bloated in the mid-bass region, the ANC23 came in smooth and tonally on point.

Since the bass was so even, we got an un-muddled listen to the midrange capabilities of the ANC23 and we are pleased to report that it was a fantastically refreshing experience. We’d normally expect midrange this open, honest and dynamic to come from larger on-ear or over-ear headphones. We found ourselves returning to familiar recordings just to see how the ANC23 handled them and we were impressed every time. Distorted guitars were absolutely filthy in the best way possible yet violins and cellos were reproduced with a lyricism that made the string instruments sound as if they were singing.

High frequencies sounded excellent, so long as they came from a high-quality recording. Lower bitrate files in our playlist sounded worse than usual, but this shouldn’t be considered a weakness on the part of the earphones. Rather, the ANC23 were just so good at rendering deep, detailed insight into recordings and their quality that the limitations of the lower bit-rate files were unavoidably evident. When pushed to their limits by an iPhone, high frequencies got pretty brash, but after testing the earphones with the same files at similar volumes with a well-powered Headroom Micro headphone amp, we were able to conclude that it was our iPhone’s questionable amplification that was causing the dirty treble.

Only one minor complaint in regards to the ANC23’s sound quality: When music gets busy and presents the earphones with a lot of different instruments and textures to pull off at a high volume, they tend to lose their ability to expose layers in a recording and become a little flat and muddled. That said, we’re talking about high volumes as provided by a portable media player with less than ample power, on music that challenges even the best headphones. The effect was considerably diminished with higher quality sources of amplification, but that isn’t a likely listening scenario for those who may be interested in ‘phones like the ANC23. Thankfully, they excel at cancelling noise, which should allow for easy listening, even on a noisy airplane, without having to crank up the volume too much.

The Audio-Technica ATH-ANC23 handily outperformed our expectations. Their sonic clarity, strength and agility put them on par with designer models that cost as much as $300 to $400. Throw some best-in-class active noise cancellation and a comfortable, secure fit into the mix and we say the ANC23 would be a value at $200. The fact that they come at a street price of about $80.00 is almost unfathomable, especially considering their stellar audio quality. It almost seems too good to be true, which is why, despite a couple of design quirks, the Audio-Technica ATH-ANC23 get our Editor’s Choice Award.