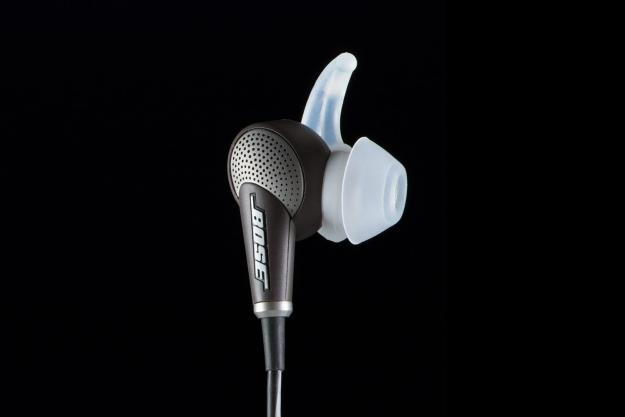 “With first-class noise cancellation, clean detail, and a comfortable fit, the QC20i provide an enjoyable, almost meditative way to escape the outside world.”

Bose’s Acoustic Noise Cancelling (ANC) headphones arrived on the scene in 1986 as part of the very first non-stop journey around the world aboard the Rutan Voyager. Since then, Bose’s ANC has ridden along with astronauts, airline pilots, and millions of weary business travelers, possibly covering more miles than anyone else in the game of electrified silence. The most recent trip for Bose’s famed technology was a much shorter journey than its auspicious beginnings, however, moving just inside the ear aboard the company’s new QuietComfort 20 ANC in-ear headphones (or, earbuds, if you must).

While the QC20 are far from the first in-ears to employ ANC technology, they do mark Bose’s first commercial attempt to break free of the over-ear design. And at $300, they might just be the most expensive model to do so as well. Still, there can be no denying Bose has made its mark by providing exemplary noise-cancelling performance. We recently went ears-on with the iOS version of the ‘phones, the QC20i, to see how smoothly Bose could transition its famous tech into a bud-sized design. Follow us below to find out what we heard and, perhaps more importantly, what we didn’t.

The QC20i arrived at our offices in the familiar Bose blue and white box, with a cardboard shell surrounding a black inner package. Pulling the interior drawer out and removing the thin layer of foam across the top revealed the graphite and silver ‘phones beneath, nestled in a flimsy layer of black plastic and sporting translucent silicone tips that stuck out in a fangled, bullhorn design which Bose calls StayHear tips.

The buds themselves felt extremely solid as we pulled them from their resting place, coated in dense plastic, with dimpled accents of dull silver at the top and tiny Bose logos along the base. The headphones’ zebra-striped cable dragged behind it a broad, multi-button inline microphone toward the top and a large, rubberized module toward the bottom which houses the bulk of the rig’s ANC electronics.

In the bottom layer of the box we discovered a small neoprene carrying case with a couple of packets of instructions, two alternate sizes of the horned ear tips, and a small USB to mini-USB charging cable for the all-important rechargeable battery.

While the QC20i are by far the smallest model to stock Bose’s ANC magic, they’re fairly large as in-ears go, protruding from the ear further than most models we test. On the plus side, the oddly shaped clear prongs on the StayHear tips look much less conspicuous once the buds are in place. In fact, it didn’t take long to really appreciate the funky tips, which not only created an excellent seal, but were also extremely easy to insert and remove. That made the QC20i one of the most convenient earbud designs for daily use we’ve come across.

While the QC20i are by far the smallest model to stock Bose’s ANC magic, they’re fairly large as in ears go …

The burden of the buds, however, is the rubberized control module that rests at the bottom of the 4-foot cable. We realize the limitations of the technology – Bose had to put the system’s electronics and 16-hour lithium-ion battery somewhere – but the slim bar’s design is inconvenient. It’s long, heavy, and set at an odd spot at the end of the cable, leaving only two inches of space between it and the terminal jack. We had a hard time finding a place where the module could lay flat in our pocket; it always seemed to want to sit at a 90-degree angle or flop over, face-down on our desk.

Bose’s designers must have been at least somewhat aware of the bar’s awkward traits, because they covered it in a supple layer of rubber that looks slick and feels good to the touch. A silver switch on the left side powers the system on, while the mini-USB charging port rests on the opposing side. On the face of the module are two LEDs (not that you would ever see them with it handcuffed to the phone in your pocket). One of the LEDs indicates battery/charging status, while the other shows whether ANC is engaged, or if the headphones are in “Awareness Mode.”

The Awareness function is a convenient feature we’ve started to see included on other premium ANC headphone offerings recently, like the PSB M4U. The feature allows you to temporarily disengage noise cancellation to hear what’s happening around you, and it’s kind of cool to hear how much noise the ‘phones are blocking out, too. Bose’s version is activated via a silver button on the side of the QC20i’s microphone piece. The other three included buttons follow the standard iOS design, with two volume keys and a multi-purpose button for play, pause, song advance, and phone calls. The microphone worked extremely well, with our test calls coming through crystal clear on the other end.

The QC20i also employ a suite of DSP to go with their amplified sound engine, including Bose’s Triport Technology and Active EQ, which shape the sound curve significantly. Like many premium ANC headphones today, the 20i will work without power, but the sound is a lot muddier, especially in the midrange, which seems to sink far into the background without DSP engaged.

As mentioned earlier, QC20i’s pre-installed tips created a near perfect fit for our ears, keeping the ‘phones in place easily and comfortably for hours of listening. The buds are a bit heavy, though, so dramatic movements made them feel precarious. To tighten things down, we attached the included clothing clip.

Now for the goods on the ANC technology: Simply put, the QC20i’s noise cancellation worked brilliantly. With a soft whisper of white noise, buzzes in our apartment like our aging refrigerator, or the obnoxious bathroom fan simply melted away from a short distance.

Taking the headphones out into the world with music at a low level, we were bathed in beautiful ambient silence. We had Stevie Wonder dialed up at the start, but the experience we had was more akin to The Police’s “Walking on the Moon.” Noisy cars were converted into softly whirring EVs, and peripheral sounds like distant construction and voices on the sidewalk were almost totally eliminated.

We next took the QC20i into the most surreal spot for testing ANC headphones we’re aware of: a crowded supermarket. If you haven’t tried ANC in-ears yet, it’s a very different experience, especially in public. You can’t really get away with over-ear ANC headphones in a supermarket the way you can on a bus or plane – well, you can, but we found people tend to stare. With earbuds, however, people tend to think you’re at least vaguely tuned into your surroundings, unaware that you’re actually in a haze of silence, as if transplanted into an underwater scene from Blue Planet. Suffice it to say, the QC20i created enough of a sound barrier to leave a strong impression.

While the noise cancellation delivered the wow, we were less impressed with the QC20i’s performance when focusing more directly on our music collection. To be fair, the headphones sounded fine for casual listening. Music was smooth, present, and relatively well detailed, making all genres extremely accessible. And at no time were our ears overpowered by bulging bass lines, or struck with sharp sibilance in the treble.

Digging a bit deeper, however, revealed characteristics that kept us feeling lukewarm about the QC20i’s sound signature. The DSP was heavy-handed, making music sound over-digitalized. The issue was most obvious in organic instrumentation, such as acoustic guitar, percussion, and horns – bad news for us, since those happen to be some of our favorite musical flavors. While the music never sounded innately bad, it was just a little off, as if the instruments had been pressure washed to remove their inherently warm, gritty textures.

The oddest example came on Ray Charles’ “It’s Alright.” The smoky old sax that introduces the track sounded distinctly different than previous listens, coming off like a synthetically altered instrument. Ray’s voice was too shiny as well. In fact, vocals generally had a satiny texture that made them seem less authentic. Percussion, from rock to hip-hop, also sounded flatter than usual, and without the punch or definition we look for.

The best sounding tracks were those with more electronic instrumentation and richer production, which seemed to mask the issues we experienced with the timbres of instruments. Stevie Wonder’s Talking Book was our favorite album with the QC20i, as the multiple clavs and rock guitars were strewn across the soundstage with precision, creating a balanced, engaging sound.

Electronic tracks like Depeche Mode’s “Policy of Truth” came through feeling colder than we wanted, but the headphones juggled the barrage of synths well and did a good job showcasing the vocal track’s reverb, cast to the right side. As for bass, it was full and fairly punctual throughout our testing, though once in a while it seemed to take up too much space in the center, crowding out vocals.

With first-class noise cancellation, clean detail, and a comfortable fit, the QC20i provide an enjoyable, almost meditative way to escape the outside world. However, those looking for premium sound to accompany the premium noise-cancelling technology may be slightly disappointed with the headphones’ tendency to render a glossy reproduction of their favorite tracks. If you’re looking for an audiophile-level sonic experience to accompany you into the void, the QC20i will likely leave you unsatisfied. But if you simply crave clear sound and placid quiet, Bose’s newest family member delivers.

The best wireless earbuds for 2022
PSB Alpha iQ Streaming Powered Speakers connect to pretty much anything
The best noise-canceling headphones for 2022
Best Bose Speaker Deals for September 2022
How to perform the AirPods Pro Ear Tip Fit Test
Best Amazon Echo Deals: Get an Echo Show for $40
How to check your AirPods battery level
Are Apple AirPods waterproof? Everything you need to know
The best cheap headphones and earbuds for 2022
Ar $25K, LG’s 97-inch G2 OLED is actually a bargain
The best horror movies based on true crimes
The best horror movies with killer kids
I desperately crave LG’s flexible OLED TV. Here’s why I won’t buy it