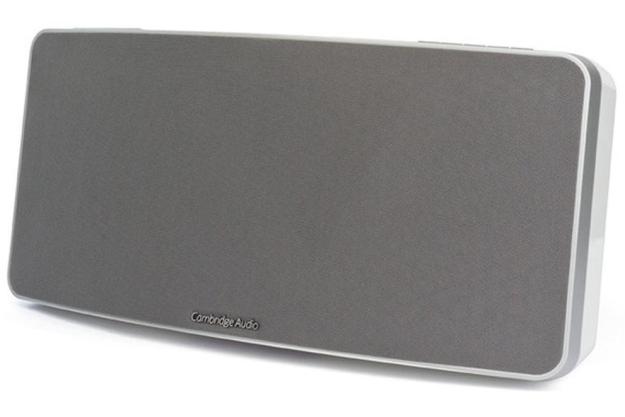 “It isn’t the last word in bass response, but the Air Minx 200 does offer superb resolution, airy highs, and one of the cleanest sounding midranges we’ve ever heard from a desktop wireless loudspeaker.”

With so many AirPlay and Bluetooth-enabled products in the marketplace, one would think that wireless speakers offering both technologies would be common and affordable at this point. However, the reality is that it’s pretty tough to find a single-box solution that offers both great fidelity and that level of connectivity.

While not inexpensive, the new Minx Air wireless music systems from Cambridge Audio are a bold first attempt at creating that elusive component; one that offers Internet Radio, Bluetooth, and AirPlay connectivity for $600.

Have the folks at Cambridge Audio over-reached with the Minx Air 200, or have they succeeded, setting the bar at an extremely high level for the rest of the industry to overcome? Let’s find out.

Cambridge Audio is better known for its integrated amplifiers, network players, and A/V receivers. So, with no real street cred when it comes to speakers, we felt the Minx Air 200 had to be really impressive out of the box in order to differentiate itself from the myriad of such well-established competitors as B&W, NuForce, and JBL.

The folks at Cambridge can exhale, because the Minx Air 200 passed our first visual inspection with flying colors. Not only did we really like its clean look and curved front baffle, but we were more than a little impressed with its heft and excellent build quality.

While some may find its all-white cabinet and grey speaker grill boring (exotic wood finishes are pretty sexy) we think the Minx Air 200 will blend perfectly into most modern homes and likely garner high rates of approval from spouses and loved ones. It doesn’t scream “Hi-Fi” and that’s probably a good thing for those planning on using it in an environment with inquisitive children.

The Minx Air 200 features two sets of controls on the top panel, and while we liked the responsive rubber buttons, we doubt they are going to get much use once you download the iOs or Android remote apps Cambridge has developed.

A supplied credit card-sized remote duplicates all of the control options found on the top panel, but we were less than impressed with its level of responsiveness; we frequently had to press specific buttons more than once to get the unit to respond.

Cambridge Audio also supplies power cords for North America, Europe, and Asia in the box along with an Ethernet cable to aid with set-up.

With a footprint measuring just 17 ¾ x 8 ¾ x 7 (W x H x D – in inches), the Minx Air 200 is unlikely to become the focal point of any room where it is situated, yet Cambridge Audio has done a rather remarkable job of squeezing every last note out of its limited internal cabinet volume.

Powered by a robust 200-watt digital amplifier, the Minx Air 200 should have little difficulty filling even the largest living room or bedroom with distortion-free sound at above-average listening levels.

The driver complement includes two round 2 ¼-inch BMR (Balanced Mode Radiator) drivers, and a single 6 ½-inch front-firing subwoofer. The patented BMR drivers used in the Minx Air combine pistonic action (to enable lower frequency response than a flat panel) and vibrational modes in one drive unit. Benefits of the BMR include wide frequency response from one driver, the ability to fit inside a slim cabinet, and wider dispersion than regular pistonic drivers.

From a wireless perspective, the Minx Air 200 offers support for Apple AirPlay, Bluetooth (with SBC, aptX, and AAC support), and Internet radio. With the aptX codec starting to appear on more and more mobile devices, support for it among manufacturers of wireless audio devices is becoming increasingly common – and that’s a really good thing.

The bottom of the speaker’s cratch-resistant cabinet is finished with a non-slip rubber surface which should help prevent the system from being moved across a table or countertop by curious children. The rubber is also there to minimize vibrations from the surface below the cabinet and it works as designed in both scenarios.

Cambridge Audio includes a credit card-sized remote control with each Minx Air 200, and while it works, we found it to be too small and somewhat finicky to use. Fortunately, Cambridge Audio has a remote app for both iOS and Android-based devices already available and it worked flawlessly on both an iPhone 5 and Google Nexus 7.

As tempting as it may be to just plop the Minx Air 200 anywhere and see how it sounds, the reality is that it benefits from some degree of boundary reinforcement. We tested the Minx Air 200 in a number of different locations, and in most scenarios, the bass response was extended when we angled the rear bass port toward the corner of two intersecting walls.

We tested the system on media consoles, bookshelves, dressers, and even countertops to see how it behaved at different heights, positioned directly against the wall, and even a few feet from the wall behind it.

Our least favorite position was directly against the wall inside a large bookcase, which we felt muddied the bass response and narrowed the soundstage. However, any scenario in which the Minx Air 200 had at least 8-inches between itself and the wall behind it alleviated the bass issue and had a positive impact on its ability to recreate soundstage depth and width.

All of the Minx Air loudspeakers feature an adjustable bass control on the rear panel, but based on our listening tests, we decided to keep it at its default position for the duration of the review.

The Minx Air 200 has a fairly wide dispersion pattern and does a decent job of reproducing the spatial details present on recordings. You’ll know quickly that something is wrong with your set-up if everything sounds as if it is limited to the narrow space between the drivers.

The process of connecting the system to both your home network for Apple AirPlay and Bluetooth-enabled devices is relatively straight forward, but we experienced a few issues that made our first few days with the Minx Air 200 slightly frustrating.

AirPlay worked straight out of the box and presented no problems during our evaluation, but some Bluetooth-enabled devices struggled when asked to pair up with the Minx Air 200. It took 4-5 attempts for our Samsung laptop to connect, for instance. This was never an issue with our mobile devices, but our laptop sure had a rough go of it.

Also, we had to live under threat that the Air Minx 200 would instantly fire back up the moment we reconnected in the morning – a frustrating situation, to be sure. We had to reset the unit a few times before the issue resolved itself.

The Minx Air 200 also stumbled if we had more than one Bluetooth-enabled device turned on and within close proximity of the other in the presence of the system. The system couldn’t decide which device to pair up with, so make sure only one device at a time is set up to be paired with the speaker.

To save power, the Minx Air 200 can be programmed to automatically shut down after a minimum of 15 minutes or a maximum of 23 hours and 45 minutes. Our review sample operated flawlessly in that regard, although we had one instance where the system turned off during the middle of a song for no reason at all.

All of the Minx Air loudspeakers feature an adjustable bass control on the rear panel, but based on our listening tests, we decided to keep it at its default position for the duration of the review.

The Minx Air 200 stands out for its ability to fill a large room with distortion-free sound. Don’t be bashful about cranking this system up, although its real prowess is to be found with the dial slightly above the midpoint of its range. The Minx Air 200 is engaging at both extremes, but we were surprised by its high level of resolution when we really pumped music above conversation levels.

This system won’t come apart at the seams when asked to reproduce music with difficult dynamic swings, either. We were particularly impressed with how it handled complex symphonic works or film soundtracks such as M83’s fantastic score for Oblivion.

… Should be seriously considered by those looking for a high-end desktop alternative to a traditional two-channel system.

The Minx Air 200 has excellent pace as well. If you enjoy listening to electronica such as Kraftwerk, the Orb, Aphex Twin, or even Daft Punk, the system moves everything along with what the Brits like to call “PRaT” (Pace, Rhythm, and Timing) and it was enormous fun to listen to some of our favorite recordings at volume levels that took us back in time to some less-than-sober evenings of our youth.

Vocals are especially vibrant through the Minx Air 200, thanks to its transparent, uncolored midrange and a top end that is both airy and detailed. Fans of jazz, pop, country, folk, and soul, will discover that this system is particularly adept at breathing life into their favorite vocalists and also easy to listen to for extended listening sessions.

The Minx Air 200 reproduces music with both coherency and a sense of scale that one doesn’t usually see from products at this price point and while it wouldn’t be our first choice for a system that is going to see a heavy diet of heavy metal, it is more than comfortable with all genres of music to be a great alternative to a traditional two-channel system if funds, or space is limited.

If we had to single out one area where the Minx Air 200 doesn’t really compete with a well-designed set of loudspeakers in the same price range, it would be in the mid-bass and below. While not anemic sounding, its bass response lacks that visceral kick that some music requires. Bass notes certainly have texture and adequate pace, but once the music begins to dwell below 100Hz, the authority isn’t quite there.

Cambridge Audio didn’t design the Minx Air 200 to shake the foundation of your home, though. Instead, it focused on producing a clean sounding system that certainly puts more emphasis on tonality, midrange transparency, and pace; and on that end, it certainly succeeded.

While not inexpensive or without strong competition from some of the most respected loudspeaker manufacturers in the world, the Minx Air 200 wireless loudspeaker from Cambridge Audio delivers the audio goods when put under the spotlight. It isn’t the last word in bass response, but this speaker does offer superb resolution, airy highs, and one of the cleanest sounding midranges we’ve ever heard from a desktop wireless loudspeaker.

Aside from a few operational hiccups in regard to its Bluetooth operation and a power on/off sequence that took getting used to, the Minx Air 200 should be seriously considered by those looking for a high-end desktop alternative to a traditional two-channel system. Regardless of source, the Minx Air 200 is a superb wireless music system that deserves to be at the top of your audition list.