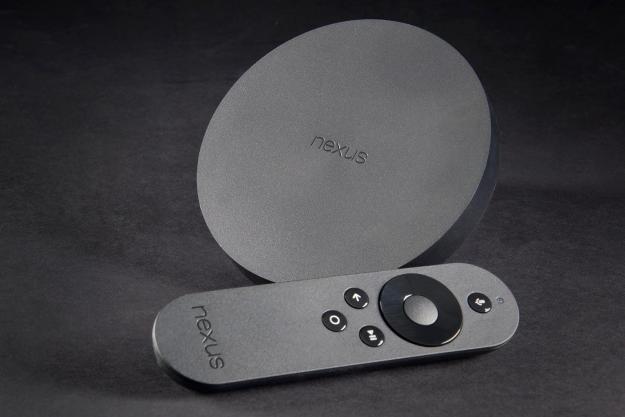 “The Nexus Player, in its present form, is too much of a disappointment to rush out and buy right away, but it has great potential.”

Google TV was a flop. Strike one. But the Nexus Q (remember that thing?), now that was a travesty. It went from hero to zero in a matter of days after critics lambasted it for being thin on features and fat on price ($300 with no remote? No thanks). Google ultimately abandoned the Nexus Q when it realized it had royally screwed up … again. Strike 2.

Google has one last shot at becoming a major player in a highly competitive game involving such heavy-hitters as Apple, Roku and Amazon, and it’s swinging big with the Asus-made Nexus Player.

Lucky for Google, that old axiom looks to be playing out in its favor. With solid hardware specs, the Nexus Player is well-suited to compete, and with Android TV at its heart, the player’s software has an exclusive advantage: Google’s extremely powerful search engine. The Nexus Player – and the Android TV platform in general – show great potential for success. Unfortunately, potential doesn’t help ease the disappointment of an app-based media player that is woefully short on apps.

It’s impossible not to draw a comparison between the Nexus Player and Amazon’s Fire TV: hardware specs are similar (but not identical), both run Android, and both rely heavily on games to help them stand out from Apple TV and Roku. So, as we unboxed, set up, and evaluated the Nexus Player, we kept the Amazon Fire TV handy, comparing the two side-by-side every step of the way.

It’s impossible not to draw a comparison between the Nexus Player and Amazon’s Fire TV.

Out of the box, the Nexus Player lacks the Fire TV’s premium feel. While the Fire TV has that soft, sleek, almost rubbery silicone coating on both the box and its included remote, the Nexus Player and its remote are covered in rather pedestrian matte black plastic. On the plus side, the Nexus Player’s base is coated in anti-skid rubber, and the puck feels pretty solid. The bundled remote, however, feels flimsy. We can’t help but worry it will have a tough time taking more than just a couple of spills off a table onto a hard floor (a regular occurrence at this reviewer’s home).

For this review, we also received the optional console-style game pad, which, like the Fire TV’s pad, bears a striking resemblance to the Xbox One controller, except it places both thumb sticks side-by-side, with the D-pad placed on the upper left. The game controller feels much better made than the Nexus Player’s stick remote, but its D-pad offers a less satisfying “click” than the Fire TV’s controller does. We also noticed that the Nexus Player’s game pad remote does not have hot-keys for play, pause, fast forward, or reverse.

Both the Nexus Player and game controller come with batteries, and there’s a typically blocky Asus power brick for the Player, but that’s all you get. No cables are included, and instructions are limited to a single card with two pictures on it. We suppose Google thinks everyone’s got this whole set-top box setup thing figured out.

The Nexus Player puck itself is extremely simple – too simple, if you ask us. Three ports line the back, including a single HDMI output, a Micro USB port, and a DC power port. Conspicuously absent are a Toslink digital audio jack and an Ethernet jack. The Roku 3 at least has an Ethernet jack, and the Fire TV has both.

On the other hand, the Nexus Player supports the latest Wi-Fi standard (802.11ac) which is capable of more than double the throughput of the prior 802.11n standard. This puts the Nexus Player in a much better position for consistent, stable wireless HD video streaming than its competition, making the exclusion of an Ethernet jack less of a concern – if you own a wireless ac router, or plan to pick one up shortly (though they’re still very expensive). The frustrating lack of an Ethernet jack is compounded by the fact that Android TV clearly supports such a connection, evidenced by an Ethernet option in the settings menu.

The lack of an optical digital audio output jack will be a bigger deal to those who have high-quality audio systems, but don’t necessarily use an A/V receiver (or sound bar) to do all their video switching. If the Nexus Player’s single HDMI output is run directly to a TV, that means the only way to get audio to a sound bar or receiver is by way of the TV’s digital audio output, which typically sounds much worse.

Under the hood, the Nexus player comes packing a 1.8GHz Quad-Core Intel Atom processor with an Imagination PowerVR Series 6 Graphics 2D/3D Engine. This compares nicely with the Fire TV’s 1.7GHz Qualcomm Snapdragon ARMv7. The Nexus player, like the Fire TV, also packs 8GB of storage, but sports just half the RAM at 1GB.

Where are the apps?

Seriously, Google? Your Android app selection is massive, so why are none of them on the Nexus Player?

Google’s Android app selection is massive, so why are none of them on the Nexus Player?

One would hope that the Nexus Player would offer full access to the Google Play Store and not restrict app selection the way Amazon does for the Fire TV. There’s no reason to think that Google is imposing any restrictions, per se, but we were disappointed to find learn app selection at launch is extremely thin. You basically get Netflix, Hulu Plus, Crackle, YouTube and Google Play for your major video streaming options. Right now, there’s no Vudu, Amazon Prime Instant, HBO Go, Watch ESPN, or any other popular apps … unless you count Food Network and AOL On for Android TV as popular.

We were extremely disappointed to find out that Plex, our favorite media player app, is only available for free to Plex pass subscribers — even if you wanted to pay $5.00 for the standard Android version of the app, you can’t … not yet, anyway. But if it does come available, we hope apps already purchased through the Google Play store for other devices will be available with no additional charge on the Nexus Player or any other Android TV device.

Music app selection is a little better, with Pandora Radio for TV, iHeartRadio, TuneIn, and Vevo represented, but Spotify isn’t supported yet. It’s hard to come down on Google too hard for no Spotify support out of the box when Amazon only recently added it. But we’re still underwhelmed.

As for Games, Amazon is way, way ahead of Android TV right now. There’s a modest selection of games for the Nexus Player, but they aren’t organized particularly well, and they aren’t nearly as kid friendly.

This will all change in time, and we’re optimistic the Android TV platform will soon offer as many apps as Amazon, if not many more. But why such a disappointing roster of apps for the Nexus Player’s grand debut? We got the impression at Google’s I/O developer conference that porting Android apps over for use on the Android TV would be a piece of cake. So why aren’t app developers climbing all over each other to be part of the Nexus Player’s introduction?

We were really hoping that Android TV would support universal search, and Google says that it does, but for now, none of the (few) apps available for the Nexus Player support the device’s voice search feature. Will that change in the future? Ask the app developers at companies like Netflix and Hulu.

We’re optimistic the Android TV will soon offer as many apps as Amazon, if not quite a few more.

If we asked the system where we could watch ABC’s Once Upon A Time, we’d wanted to be shown every option for watching the show. That would include the Google Play Store and YouTube options, of course, but we also wanted it to include Netflix and Hulu Plus. No dice, folks. Android TV is presently no different than the Fire TV in this regard — again, at least for now. Perhaps we’re expecting too much from devices made by content providers, but as long as Roku is out there making it easy for everyone to find whatever they want to watch, on every service available, it is going to have a distinct advantage.

To be clear: Google provides an open API that allows app developers to incorporate voice search capabilities. In theory, our search for Once Upon A Time could one day show results from Netflix and Hulu, detailing what seasons/episodes are available. But for whatever reason, that functionality is not yet available.

The “power” of Google’s search engine isn’t being leveraged the way we’d hoped it would, but you can still use it to your advantage. For instance, we asked via voice search what the weather was like, and it showed us the current conditions for our area. It will tell you what time it is, and if you ask it how far it is to Venus, it will tell you that, too. The search query will even queue up music on demand. For instance, we said, “play me some funk,” and had disco jams rocking in no time (never mind that the audio quality was really low).

The search query’s biggest advantage, though, is helping you find content the way you want to find it. For instance, you can ask to see a list of Oscar-nominated movies from 2010, or movies about scarecrows, and you’ll get exactly what you ask for.

The Nexus Player’s ability to act as a casting device might be its most powerful selling point in the long run. Both Android and iOS users can throw content at the Nexus Player just as they might with a Chromecast dongle. This may seem like a small benefit when the Player offers its own remote and apps, but there are a number of smartphone and tablet mirroring opportunities users will want to seize. And besides, can you imagine the outrage that would ensue if Google hadn’t made the Nexus Player cast-able?

The Nexus Player has what it needs to provide a great user experience, but its not delivering, yet. App selection is thin, search isn’t universal, there are too few categories for organizing content, and the Wi-Fi stability was buggy on our office’s crowded network. Aside from that, the user interface is fine. We like the graphics, and navigation is snappy. All the rest of that stuff can be fixed – and it needs to be – the question is if/when Google will get around to it.

When the Amazon Fire TV first came out, we thought app support was a little light, but held out hope that the situation would change. It did, and it did so quickly. These days, we enjoy our Amazon Fire TV box quite a bit, and our kids enjoy it even more (games).

The Nexus Player, though, has a tougher road to hoe. It debuts with even fewer apps and games than the Fire TV did, and it does so very late in the game. The holidays are right around the corner, and the Nexus Player is not ready to light up people’s faces with smiles when unwrapped. That could be a very big problem. However, if we give Google time to develop Android TV’s app offerings, and strengthen the system’s search abilities, we may wind up liking it more than our Fire TV.

In its present form, the Nexus Player is too much of a disappointment to rush out and buy right away, but it has potential, which is more than could ever have been said about Google TV or the Nexus Q.