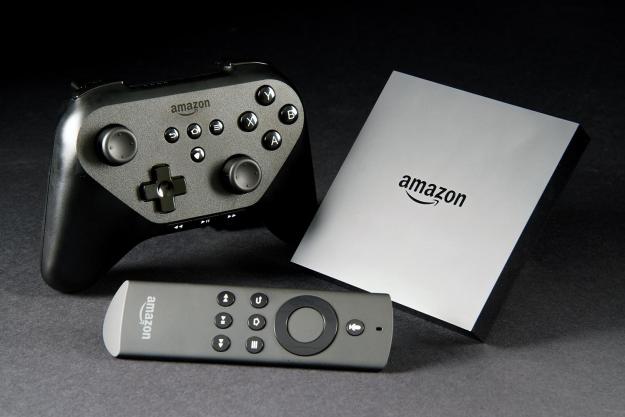 “After all of Amazon’s chest beating, The FireTV might feel disappointing in some regards, but it’s still a great little streaming media box with a snappy, intuitive interface and plenty of promise.”

This review was performed on the first-generation Fire TV. That model is no longer available. Click here to see the new Amazon Fire TV review.

When Amazon unveiled the Fire TV, the company beat its chest about its killer performance, superior search capabilities, and lack of a “closed ecosystem,” pausing in between each bullet point to clown its competition over their inferiority.

Unfortunately, the Fire TV fails on all three of Amazon’s intended objectives. You might think that would be a death sentence, but the truth is, the Fire TV is an outstanding little streaming set-top box with a lot of appeal, it was just built up too much. Read on to find out what the Fire TV can and can’t do, and why we think it’s a top contender in the set-top box space.

Amazon nailed the unboxing experience with the Fire TV. The set-top box is compact and so is the packaging, which sports a glowing orange interior against its matte black exterior. Inside the box, we found the set-top box, a remote control, a pair of batteries, and a power cable which, thankfully, takes up a minimum of space.

When you pick up the Fire TV, it has a feel that stands up well to the Apple TV, and makes the Roku 3 feel like a child’s toy in comparison. Its matte black exterior is interrupted only by a tidy, gloss-black Amazon logo up top. Underneath, the box has a very slightly rubbery feel, which prevents it from sliding around on smooth surfaces (like other electronics). Sitting at 4.5 x 4.5 x 0.7 (W x D x H – in inches) the Fire TV is certainly thinner than competing set-top boxes, but it’s also broader and deeper. It has a more high-tech look without the hockey puck shape, and that’s a good thing.

The remote feels great in your hand, thanks to its rubbery exterior and smooth, glossy buttons that give a satisfyingly solid “click.” It may not be as sleek as the Apple TV’s remote, but its far better than Roku’s remotes, save the fact that it doesn’t feature a headphone jack for wireless audio.

Unfortunately, we’re not as in love with the optional gaming controller. It looks generic, and feedback to button presses isn’t nearly as confidence inspiring. We’ll leave it to our gaming team to comment on what it’s like to use it for extended periods of time, but out of the box, it lacks the solid feel of the remote.

The Fire TV box is outfitted with an HDMI output, optical digital audio output, Ethernet port, power port and a mysterious USB port. At this time it is unclear what the USB port will be used for, but we hope it will support additional storage in the future.

The Fire TV is capable of up to 1080p resolution (no 4K/UHD support, sorry!) and its surround output is limited to Dolby Digital Plus – no DTS support at this time.

Although we think the Fire TV was a little overhyped at its introduction, it’s still a really great set-top streamer with great performance.

Under the hood is a quad-core processor, dedicated graphics processor, a dual-antenna, dual-band Wi-Fi chip with MIMO support for faster downloads, and 2GB of RAM. The box does pack 8GB of storage, but only 5.5GB of that is available to the user. As we found out, that can turn out to be a limiting amount of space for those who want to download a lot of games and apps.

Some of the Fire TV’s more notable capabilities include voice search, gaming capabilities, and second-screen features currently limited to Kindle Fire HDX owners (with iOS support coming, according to Amazon). One of the most promising features (on paper, anyway) is ASAP, a process by which the Fire TV learns your viewing habits, anticipates what movies and TV you’ll want to watch, and then begins caching the video so that it starts instantly – no buffering – when the title is selected.

The remote control features just seven buttons, one of which is a microphone button for voice search. There’s also a five-way cursor controller for navigation and selection actions. The microphone for voice recognition lives at the top of the remote. Again, no headphone jack for wireless audio (can you tell that’s one of our favorite Roku features yet?).

For all the hot-rod hardware and rip-roaring speed the Fire TV promises, we hoped for a quick setup process, too. Oh, no, no, no. After connecting it to your router, you will be treated to a software update that can take anywhere from 15 minutes to half an hour, depending on your Internet speed and traffic at the time. Then, just when you think it you’re about to get to start playing around, you are subjected to an unskippable, inexplicably loud product orientation video which explains some of the Fire TV’s basic features. While it’s a wise idea to cater to novice users, advanced users will be frustrated that they can’t skip it.

From there, you’ll need enter your usernames and passwords for each subscription account you have, but not before downloading the apps you want. That’s right: Apps such as Netflix, Hulu, Plex, and Watch ESPN are not pre-installed. Fortunately, the process of downloading and installing an app is quick, but we were left scratching our heads as to why the most popular apps weren’t pre-installed, perhaps with the option to un-install them if desired.

For our evaluation, we downloaded Netflix, Hulu and Plex.  Amazon Prime Instant Video, naturally, is available out of the box. Entering our account information took a while, which is typical of any smart device, but because there is no iOS or Android app with an integrated keyboard like the Roku offers, you’ll be hunting and pecking out the letters and numbers for a while. This just adds a little insult to injury after the long update, unwelcome “welcome video,” and surprise app downloading process. Be prepared to exercise some patience during the setup phase.

First, the good stuff: We really enjoyed the Fire TV’s user interface (UI). It’s not unlike Roku’s UI in that it has a vertically scrolling list of options along the left side, which is populated by graphic tiles on the right hand side. That’s where the Fire TV UI breaks from similarity to Roku’s design: Each of the rows of tiles scroll horizontally – much like Netflix – to offer more options. Right off the bat, you’re bouncing around the different rows, exploring all the possibilities.

And there are plenty of possibilities. Though the Fire TV’s Android operating system is locked down under Amazon’s own skin and, therefore, app selection is limited by Amazon, there are plenty of apps available now, with more to come in the future. For most users, all the important apps are available already, including Netflix, Hulu, Vevo, Watch ESPN, NBA, Pandora, YouTube, Crackle, Vimeo, Showtime Anytime, and RealPlayer Cloud. Notably absent is HBO GO and Vudu, though that will likely change soon.

Using the apps works just as well as it does on Roku systems, and in some instances, better. For instance, you can stream music from Pandora while playing video games if you like – a feature not unlike those found in game consoles.

So far, so good; but then we started digging into some of Amazon’s claimed superior features, and we found the Fire TV came up short in a few spots.

The other disappointment came over the Fire TV’s supposedly superior speed. To be fair, the Fire TV does boot up far faster than the Roku does when powered on, but who routinely unplugs their set-top box?  Most users will keep the box in standby mode, and from there, the Fire TV’s speed advantages are negligible. We found that it loaded apps with the same speed as the Roku 3, and when it came to loading up movies from Netflix or TV shows from Hulu, the Fire TV and Roku 3 were neck and neck – no clear speed advantages for the Fire TV there, either. The one and only time the Fire TV was able to blow the doors of our Roku 3 was any time we played content from Amazon. Here, the ASAP caching feature paid off big time, and we look forward to seeing how good it gets at anticipating our program choices going forward.

As for the notion of a closed ecosystem, we’ll grant that Amazon didn’t lock any specific app out, per se, and it was sure to include all of its major competitors, but with the limited search feature and ASAP ostensibly limited to Amazon content as well, we can’t help but feel like Amazon’s intention is to push its own content over others. That’s not a surprise, just a little bit of a disappointment.

We’ll leave it to our Gaming Editors to fully evaluate the Fire TV’s gaming performance, but we will say that we were pleasantly surprised at the quality and performance of the games we did test. We didn’t suffer any lag while playing Sev Zero, a free first-person shooter app. And Asphalt 8 – also free – was a bunch of fun for us as casual gamers. We came away from the experience thinking that the gaming aspect was one of the Fire TV’s more desirable features, for sure. There’s just a couple things potential Fire TV gamers should be aware of, though.

The games available are essentially ported over mobile games, originally designed for smartphones and tablets, so they don’t have the depth of a true console title. Also, some can be real space hogs: Asphalt 8 took up almost 1GB of the available 5.5GB of storage space. Granted, that’s one of the larger games, but it does illustrate how quickly the Fire TV can fill up. And when it does fill up, it shoots you this alarming message that implies streaming performance will take a hit if you use up all your storage space. We gather that means the ASAP video caching won’t work anymore, but it’s kind of a non-specific red flag that may cause undue concern.

Although we think the Fire TV was a little overhyped at its introduction, it’s still a really great set-top streamer with great performance. The one big low point is the lack of universal search, and the box isn’t the Formula 1 speed demon we had hoped for. On the other hand, its far better for casual gaming than we had anticipated, and it’s got an intuitive, snappy interface that makes using all the popular apps as easy it is on a Roku device – and that’s saying something.

Does the Fire TV blow the Roku out of the water? No, but in an all-out race for set-top streamer supremacy, it runs neck and neck. We’re certain anyone who chooses to pick up a Fire TV is going to thoroughly enjoy using it. It really is a top-notch product.