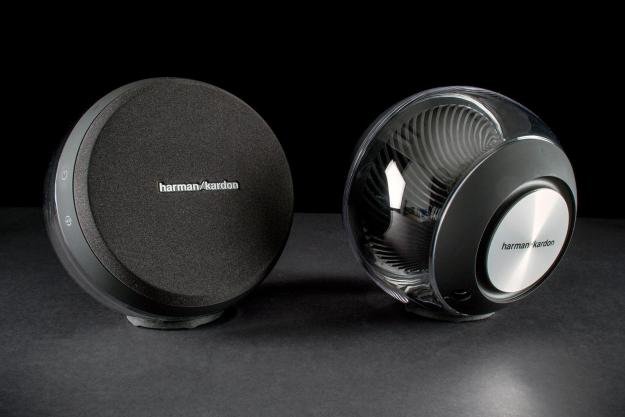 “If you’re willing to spend a little more for their devilish good looks, HK’s Nova are certainly worth consideration.”

When it comes to the exploding wireless desktop speaker market, it’s not just about sound anymore; it’s about style. As good-sounding as they might be, plain-jane rectangular cabinets don’t seem to cut it anymore. So, audio companies are increasingly forging creative designs that contribute to a larger overall aesthetic, from tiny metallic spheres, to moon-shaped pods straight out of a Daft Punk video.

Not to be left out, Harman Kardon recently crafted its own highly stylized pair of desktop noise-makers, the Nova 2.0. Molded from globes of dense, translucent plastic, the Nova 2.0 not only look cool, but show off a unique vortex design inside, which is designed to efficiently and powerfully port sound pressure from the drivers up front to a rumbling passive radiator at the rear. They look very, very cool, but do the strange, turbine-loaded spheres sound just as good? We throttled the Nova 2.0 to find out.

If a premium un-boxing experience does it for you, the Nova 2.0 won’t let you down. Pulling back the lid revealed a sleek, matte-black platform across the top, with a slim packet of instructions folded into slits at the corners. Removing the platform unearthed an all black interior with the dual globes packed side by side, concealed within black cloth shrouds.

We removed the protective sacks to find the crystalline speakers within, gleaming like laser-cut glass

We removed the protective sacks to find the crystalline speakers within, gleaming like laser-cut glass, and accented with rubberized borders around black speaker grills. Touch capacitive buttons for power, volume, and Bluetooth pairing littered the right speaker, and our hands met metal caps along the backside of the cabinets, protecting the tractable passive radiators.

At the center of the package was a small box of accessories, including a power supply and cable, a 6-pin proprietary speaker cable to link the two speakers, and a 3.5mm Aux input cable.

As modern and unique as the Nova 2.0 look, we think they’ll blend in nicely with most any decor. The speakers’ essential lack of a color scheme means they’ll let whatever you’re rocking in your home or office shine through, be it marble countertop, or a mahogany shelf. And if black’s not your style, the trim can be swapped out for white accents as well.

The Nova 2.0 were a tad smaller than we expected, considering the packaging. Each globe weighs around 2 lbs. each, and measures approximately 6-inches in diameter across the front. The speakers sit on small rubber pads that face them at an upward angle. Our only aesthetic-based complaint came while staring down the barrels of the black grilles: The Harman Kardon logo was slightly off-kilter on the left speaker. Yeah, we’re a little OCD like that.

Like most of these wireless speaker duos, the right-hand unit is the captain of the ship. The speaker hosts all of the inputs, which include a 3.5mm jack, an optical digital connection, and Bluetooth wireless pairing via NFC. Touch-capacitive buttons run along the speaker’s rubberized border, including one for power, bass boost, and source/pairing. There’s also a volume band across the top, which can be controlled by swiping your finger. Volume is directly linked to a mobile device when paired via Bluetooth. All of the buttons are backlit with LEDs, which glow bright white when power is engaged.

A smooth touch of the power key changes the symbol from its resting orange (so you can find it) to the clear white which lets you know the system is ready to roll. That smooth touch is actually an important point, because the touch keys are a little sensitive: press them too hard or too quickly and they won’t work at all. Once we got the hang of it, however, they performed just fine … mostly. The touch system is a little like the early touch screens on smartphones.

Beneath each speaker’s black speaker grill is a pair of drivers, including a 2.5-inch midrange cone, with a 1.25-inch tweeter just above. The active drivers are pushed with 40-watts of total power – 20 watts per channel. The energy created is then thrust through the ‘vortex’ to fire the passive radiator at the rear. When these babies are really fired up, the aluminum caps over the passive radiators vibrate with a satisfying blur. The system’s total frequency range is claimed at 70Hz-20kHz, and the speakers got close to that low-end mark with some authority.

Setup is as simple as you’d expect. Start with connecting the power cable, then use the supplied proprietary cable to link the two speakers together. Power the speakers on (light touch, remember) and choose a sound source. Most users will likely go with the convenience of Bluetooth, engaged by an NFC touch or a quick tap of the source button until it glows blue, which will allow the Nova 2.0 to show up in your device’s Bluetooth settings.

You can also use the optical input to connect to a Blu-ray player, TV, or computer sound card, but you’ll need to supply your own cable for that. If wireless isn’t your thing, you could also connect nearly any device via the provided 3.5mm Aux cable.

Right out of the gate, the Nova 2.0 reminded us just how far sound has come for the shelf-top speaker genre in the last few years. We loaded up one of our favorite acoustic tracks, “Out of the Woods” by Nickel Creek, and blossoming forth from the little globes were rich guitar strums, smooth mandolin, and full vocals, all delivered with an impressive amount of power and breadth. A few passersby came in to listen, and were pleasantly surprised by the sheer magnitude of sound pouring from the little fishbowl-like speakers.

… the Nova 2.0 got a little louder than the competition, and bumped the lowest bass grooves with a bit more gravitas.

Moving through our catalog, we enjoyed the thick sound of the system’s midrange, and a nice bump in the bass that allowed the speakers to do justice to heavy hitters like “Royals” by Lorde, or “Big Poppa” by, well, Big Poppa. Guitar chords ringing in the upper register brought a little more nickel aluminum than the glossy silver resonance you’ll hear from a larger-profile speaker system, but for the most part, the Nova 2.0 stayed away from the boxy sound you’d expect from a speaker their size.

What tamed our enthusiasm for the Nova 2.0 was the same notion that was sparked when we fired them up in the first place. Specifically: the ever-expanding collection of increasinly good-sounding speakers in the desktop genre. While HK’s latest stand up pretty well, the accuracy of the system is decidedly less precise when it comes to the attack from instruments, especially in the treble, and the overall resolution of the sound simply wasn’t carved as deeply as some competing speakers we’ve recently auditioned.

The issue was most apparent when we did an A/B comparison to a recently evaluated speaker, the Edifier E25 Luna Eclipse. Bouncing back and forth between the two systems, the Luna offered much more fine-point accuracy in a variety of genres, from the gritty attacks of strings in Neil Young’s Harvest, to the texturized 8-bit vocals of Daft Punk’s Random Access Memories. On top of that, the Edifiers offered a larger, airier soundscape, making the Nova 2.0 sound a little claustrophobic and recessed by comparison.

For their part, the Nova 2.0 got a little louder than the competition, and bumped the lowest bass grooves with a bit more gravitas. Unfortunately, the Nova 2.0 are also price $100 more than the Luna. Of course, the Luna Eclipse are a remarkable value; and we really enjoyed our time with the Nova 2.0. Their more relaxed overall sound signature is right up our alley – so long as we don’t listen with a super-critical ear.

Residing in one of the most competitive genres in audio, Harman Kardon’s new Nova 2.0 have their work cut out for them. Those looking for top-shelf precision in a stylized desktop can find it elsewhere for less cash, including the aforementioned Luna Eclipse. That said, the Nova 2.0 offer a big, heady punch of sound in a gorgeous, globular package unlike any other in the field. If you’re willing to spend a little more for their devilish good looks, HK’s Nova 2.0 are certainly worth consideration.

Topics
The best Bluetooth speakers for 2023: Marshall, Sonos, JBL, and more
NAD’s CS1 adds wireless streaming music to any audio system
Bowers & Wilkins’ wireless earbuds get better battery life and longer range
Amazon adds audio personalization to Echo Buds 2
Beats Studio 3 headphones are $120 off today at Amazon
Best 4K projectors for 2023
The best ultra short throw projectors for 2023
How to watch Puppy Bowl 2023
BluOS will be updated to 4.0 with a fresh look, new features
Samsung accidentally reveals price of its 77-inch QD-OLED TV
The best QLED TVs for 2023: bring on the brightness
The best OLED TVs for 2023: from LG, Sony, and Samsung
The 50 best movies on Netflix right now (January 2023)