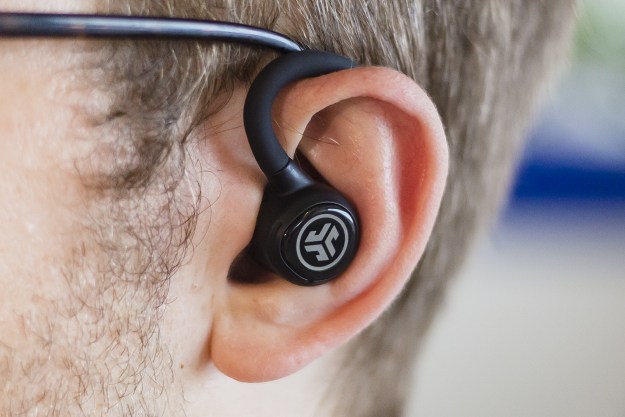 “JLab’s Epic Air Elite iron out the wireless kinks to pair a tight fit with even tighter connection.”

What used to be something of a novelty has turned into a flood, with true wireless earbuds easy to find, and coming in a range of price tags. They’re also coming in varying form factors with sound profiles that often correspond with how much they cost.

JLab has been at the true wireless earbuds game before, releasing its Epic Air. This time, the company slapped on an “Elite” moniker on its new buds, with an aim at correcting some issues from the previous model. We put the Epic Air Elite through rigorous testing to see if they really plug all the holes.

JLab changed the packaging this time around, and in a good way. Instead of the GoPro-style casing with the earbuds suspended in place, the Epic Air Elite arrive inside their charging case within the box. The covering flap shows what they look like visually, so there are no mysteries here. As before, there are multiple pairs of tips — seven to be exact. Three are standard small, medium, large ones, plus a shallow pair. The single blue pair is made of a rigid, yet malleable foam. The last two have double or triple flange designs for longer reach and greater passive noise isolation.

The large charging case is back, but this time it has a slightly larger battery, and is negligibly heavier than its predecessor. There’s also a quick-start guide and the same short and flat micro-USB cable for recharging, as well as a USB-A port at the back for reverse charging a mobile device. We would’ve liked to see JLab go with USB-C as the charging input here instead of micro-USB, however. Fewer and fewer phones use that port now, making the included cable less relevant.

It’s obvious immediately that JLab didn’t want to mess with the original Epic Air’s form factor. The Epic Air Elite are basically physical carbon copies of their predecessors. The ear hooks are the same, the build feels the same, and the fit is really no different, either. Even the IP55 water and dust-resistance is the same, so you don’t have the green light to go diving into the pool just yet.

Not only do calls sound clearer, but we could also hear callers through both earbuds.

So, what’s changed, you ask? Most of the work done was under the hood, mainly because that’s where the previous models faltered. JLab says it upgraded the Bluetooth connection for sturdier links, both to the paired device and between the two earbuds themselves. This has practical implications in a few ways: Only the right earbud needs to be paired with a device, while the left links to the right, thereby completing the chain.

After the initial pairing process, the Epic Air Elite paired faster for us out of the case than the original model. Built-in voice prompts noted successful connections and battery level every time. The upgrade also widened the wireless range, leading to fewer dropouts of the type that sometimes plagued the previous model.

JLab also outfitted the earbuds with extra touch-based controls. Triple-tapping either bud turns on Be Aware Mode, allowing ambient noise to seep through for times when you need to be able to hear the outside world. Holding both left and right buds at the same time cycles through three EQ modes. Signature boosts everything, focusing on bass and vocals, especially. Balance, as you might expect, keeps everything even. Bass Boost is also pretty self-explanatory.

Another upgrade for the Epic Air Elite is improved phone calls. Not only do calls sound clearer, but we could also hear callers through both earbuds. It was (oddly) only the right earbud before.

JLab claims an overall battery life of 38 hours — six hours per charge for the earbuds (an extra two hours of juice), plus 32 hours on standby from the case. It’s a serious step up, especially when few other vendors are hitting those types of numbers, but volume level ultimately makes the biggest difference in how long they last (more on that below).

The Epic Air Elite were primarily made to sound more consistent rather than markedly better than their predecessors.

We found this configuration a little better, but not right away. Most true wireless earbuds usually treat a single tap as play/pause, not volume control, which is something we had to get used to. The double and triple taps weren’t always effective, forcing us to sometimes try again and again.

The dedicated tuning app for iOS and Android is JLab’s way of “burning-in” the Epic Air Elite by playing white noise and other sounds in 10-minute increments. Unfortunately, the company didn’t figure out a way to do it with the app running in the background, which was the same issue with the original model. We were supposed to do this for up to 40 hours total in the first week — a number that just wasn’t realistic. Even less so when there’s no way to do it while running other apps.

Instead, we chose to do it the old-fashioned way — listening to a lot of tunes. Whether the effect was the same as the burn-in tool or not is unclear, but sound loosens the diaphragm inside anyway.

With the same 8mm drivers inside, the Epic Air Elite were primarily made to sound more consistent rather than markedly better than their predecessors. The same aptX and AAC Bluetooth codec support means iOS and Android users are on a level playing field.

The EQ options JLab threw in aren’t bad, but we would’ve liked to see more attention put toward an app that could configure custom presets, not just tuning. The Signature profile does indeed bass boost but isn’t quite as effective on vocals. There’s a lack of warmth and resonance in some tracks, leading to inconsistent results. We liked the earbuds more for classic rock and jazz, where the midrange is already well defined in most cases.

Hip hop, R&B and electronica listeners might prefer the Bass Boost profile, though we weren’t sure it really boosted it beyond what Signature could. If you want an extra punch at the expense of the highs, this is the way to go. Balanced is the most reliable, especially for tracks with strong mids. The lack of a boost on the ends of the spectrum let a song just flow without skewing either way.

With five full extra charges, we only had to recharge the Epic Air’s Elite’s case after a week of use.

For testing, we first listened to the same playlist we tested with the Epic Air. As before, the midrange and treble are subordinate to the bass. Ed Sheeran’s Shape of You is a good example of how that happens. When playing classic rock tracks, like AC/DC’s Back in Black or Queen’s Bohemian Rhapsody, the Balance profile was the best option, letting the guitars breathe without having to punch through too much bass.

Results varied depending on genre. Signature wasn’t too bad for smooth jazz or instrumental recordings, like the Battlefield I soundtrack. The skewed spectrum isn’t so much a problem as it is a consequence of the excellent fit. We weren’t surprised the Epic Air Elite fit and felt the same way as their predecessors — JLab didn’t tinker with the size or form factor, and is better for it.

More important was the rigidity of the connection. We previously experienced dropouts at random times, whereas those instances were much rarer this time around. Equally impressive was the connection range, allowing us to roam into different rooms of the house with no hiccups. Another issue that appears to have been solved is the shifting stereo image, where audio switched from left to right out of nowhere. The daisy-chain connection we noted earlier is stronger, which explains the more consistent stereo channels.

We mentioned this earlier, too, but phone calls sounded better on both sides. We’re not aware of JLab doing anything differently with the mics inside, but callers noted we sounded clear. In turn, they sounded better as well, and we appreciated being able to hear them through both ears.

We still aren’t crazy about the Be Aware Mode, but it’s nice to have in a pinch. It’s not as effective as most iterations in other earbuds, though triple-tapping to turn it on didn’t always work the first time.

The Epic Air Elite are sufficiently loud, thanks to the 8mm drivers. JLab’s additional two hours of playtime is somewhat offset by whatever volume you play at. The good news is that we were fine at 60 percent volume in most cases, which routinely returned five hours of playback per charge or, but never hitting six. With five full extra charges, we only had to recharge the case after a week of use. For about 10 days, we never had to worry about the earbuds having a full charge or not. It’s just that all that juice comes with a case that really isn’t as portable as many others on the market, most notably Apple’s AirPods.

JLab offers a standard one-year warranty covering parts and labor for repair and replacement but doesn’t necessarily include damage from sweat. There is a 30-day guarantee, with exchange or return from the point of purchase.

JLab released the Epic Air Elite to fix what went wrong with the Epic Air. Improving the connection was the primary motivation, while adding a few sound options adds some incentive. The other basics remain the same. The fit is still tight and the earphones sound loud enough in almost every circumstance. For workouts and jogging, those two things matter. That phone calls are better only sweetens the deal.

We weren’t bullish on the Epic Air, but the Elite version are a much better value as JLab addressed the biggest pain points. They may not offer top-tier sound, but they are dependable and fit great.

Apple’s AirPods are the standard-bearer because they’re the most visible, and a top choice for iOS users. The Epic Air Elite deliver far better bass and offer more ruggedness at a similar price. The Jabra Elite 65t or Active Elite 65t aren’t that much more expensive, and are both favorites in the category.

The Rowkin Surge Charge are considerably cheaper at $90, albeit with a more elaborate case, fewer ear tips and no sound profiles. Despite the fatter price tag, Nuheara’s IQbuds are stacked with all kinds of audio enhancement features, and ideal for those with hearing impairment.

True wireless earbuds are getting better, with some models really standing out as the category grows.

There’s no real difference here from the previous model. If you’re one to use earbuds like these while breaking a sweat often, clean them regularly to keep salt from perspiration from causing any damage. The warranty doesn’t cover sweat-induced damage, so it’s important to keep that in mind.

We’re more confident about the connection staying consistent over time, however. Though we didn’t fear degradation with the Epic Air, the Elite version gives us less to worry about.

If you bought the Epic Air, liked the fit and sound, but hated the connectivity issues, you should abandon those and get the Elite as a replacement. If JLab is new to you, and you’re on the hunt for a new pair of true wireless earbuds, you probably won’t be disappointed with the mix of comfort, performance, features, and battery life here.