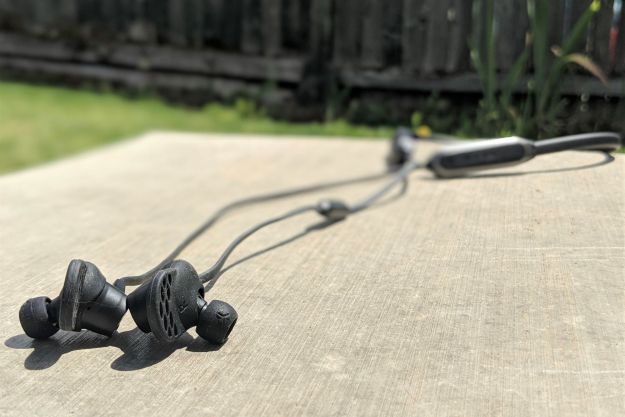 “Though comfy, durable, and cheap, the Epic ANC do very little to separate themselves from the pack.”

JLab Audio is on an unwavering pace of creating affordable listening products, most of which are outfitted with features and sound that well exceed their price points. In doing so, it may have created its own unique problem. When your products consistently try and push their own boundaries, the lines between them can get muddled and leave you asking why they even exist at all.

With JLab’s new $79 Epic ANC wired earbuds, we had to ask: Are they able to differentiate themselves from their similar siblings and challenge competitors from other brands?

By now, I’ve opened enough JLab packages to know what to expect. The Epic ANC earbuds are waiting for you in their own plastic tray, with the rest of the box’s contents just below them. Those accessories include three sets of ear tips, a micro USB charging cable, a travel pouch (JLab calls it a case, but it’s a pouch), and a quick setup guide.

In other words, not a lot of pageantry to marvel at here. But that’s not really JLab’s style. The company’s products have traditionally relied on shedding the weight of being fancy to deliver good value at a bargain price. That’s exactly what you see once again with the Epic ANC.

Connecting was simple, thanks to the buds automatically entering Bluetooth pairing mode when you first turn them on. That may be standard practice these days but trust me: For the few products that don’t have that auto pairing mode, you miss that subtle perk.

The Epic ANC have Bluetooth 5 technology built in, and I have no connection issues to report. The buds were capable of freely traveling with me about my home without dropping out as my phone sat in the living room. While I didn’t necessarily push the boundaries much, I feel confident in the range of these buds.

As I’ve said with other earbuds in this style, these wired setups just don’t catch the eye the way true wireless alternatives do. There’s fair reasoning for that, of course: The very inclusion of wires introduces the possibility of getting snagged or damaged while traversing everyday life. Plus, true wireless earbuds generally offer a more attractive aesthetic.

Honestly, it’s something of a shame that these styles take a back seat because, wires aside, there’s a lot to like about the way the Epic ANC were designed. Starting with the buds themselves, the included “cush fins” (JLab terminology) helped to create a secure fit in my ears. After multiple runs with the Epic ANC, I was delighted to find that I only had to adjust them a small handful of times. For a product that bounces around the back of your neck constantly during intensive activities, that’s a win in my book.

I opted for the smaller-sized standard eartips, which made for a comfy accommodation in my ears. JLab does provide a set of triple flange eartips and a pair of cloud foam tips as well, but the standard suited my needs just fine.

JLab was oddly light on specs with the Epic ANC, so I don’t have any exact weight to report. But I can say they were lightweight enough to make sense to work out with, though their siblings, the Epic Sport2, are significantly lighter. As wired buds dedicated to working out, though, their lightness not only makes sense but is expected.

The Epic ANC come in just one color (black), so if you like to have design options you won’t find those here. The travel case/pouch is black as well, with a durable feel to it that should come in handy when storing the buds in a travel bag or backpack.

The more I used the Epic ANC, the more I thought of the 1More Dual Driver ANC. They’re both made in the same style, likely with the same kind of audience in mind. At half the price, it would have made sense not to expect the Epic ANC to compete with the features of the Dual Driver ANC. But, if I’ve learned anything from past JLab reviews, it’s that this brand knows how to close the gap while cutting costs.

For instance, the 1More feature 20 hours of battery life without using Active Noise Cancellation, and 15 hours with the feature turned on. For JLab, non-ANC usage balloons to 25 hours of playback, though ANC-supported listening takes a slight step back at 14 hours. The Epic ANC do, however, come with an AUC cord adaptor to plug in and listen should your battery falter.

From my testing, I can confirm that JLab’s battery claims are accurate. That kind of juice should be adequate to get a few days’ worth of work done while using Active Noise Cancellation. Or, if you’re still working from home without the need to cancel out noisy environments, you can stretch the buds’ battery out over several days.

The Epic ANC carry an IP54 weatherproof rating, giving the buds protection against dust and water sprays from any direction. I wasn’t expecting to get these wet in the heat of the summer but leave it to the good old Pacific Northwest to dial-up a short shower during a morning walk. Rest assured: The Epic ANC handled it without issue.

For comparison, the Epic Sport2 feature an improved IP66 rating, which protects against high-pressure water jets, while the 1More have an IPX5 resistance that protects them against jet streams, though it’s not rated against dust.

The Epic ANC have an in-line remote that handles all the earbuds’ controls. A button on the side of the remote cycles through ANC modes, with arrows on opposite ends of the remote control volume and track switching. A double press of the bottom arrow even activates your preferred smart assistant, while the center button powers the device on and off, and answers and ends calls. When it comes to controls, most people place a high value on functionality, and the Epic ANC meet that bar well.

The major difference between the Epic ANC and the more expensive 1More Dual Driver revolves around sound. Because, while the Epic ANC provide serviceable sound quality, they don’t hold a candle to the audio experience of the Dual Driver ANC.

This was almost bound to happen, of course, since these two products are technically sparring in between weight classes. And to be clear, if the Epic ANC were fighting someone their own size, they’d fare more favorably. But when deciding whether to spend the extra money or stick with a budget option, this feels like a comparison we have to make.

From a generic standpoint, the Epic ANC do sound decent, with above-average clarity from what you’d expect in sub-$100 earbuds. The issues are at either end of the frequency range, where bass in songs like Eminem’s Godzilla feels subdued, and tracks like Jimmie Allen’s This Is Us feel a tad harsh in the higher frequencies. Pitted against the 1More, which expertly navigates different genres, these issues only become more accentuated.

Like the 1More, JLab recommends a burn-in period (through its own burn-in tool app) to get the best sound out of these buds. That takes time I didn’t have for the purposes of this review, however, so I rode it out with stock sound. Which, just to reiterate, will sound fine for the majority of listeners. It just won’t be anything to write home about.

Unfortunately, I have more “meh” news to report for JLab fans here. The active noise cancellation features built into the Epic ANC make for a decent complement to the buds’ sound quality, but they don’t have the impact many may be hoping for.

Turning on ANC did dampen some outside sounds in the different environments I tried it in, but in louder situations, like when I was strolling down a busy street, they didn’t do nearly enough to mask the excess noise. Plus, both myself and others had trouble discerning between the Epic ANC’s two noise control modes (high and low). When you can’t tell between those two settings, there’s a clear issue.

The 1More, for context, were significantly more effective when testing in similar environments. Neither set takes the cake in the realm of ANC, but the Dual Driver ANC had much more of a grasp on the technology.

I will say that the Epic ANC’s third noise control mode, Be Aware Mode, did exactly what it claimed it would. Enacting that mode piped in outside noise effectively, making it easy to address friendly neighbors while maintaining a proper social distance.

The Epic ANC are the budget alternatives to 1More’s excellent Dual Driver ANC in all ways except sound, which leaves much to be desired. That doesn’t completely deter another valuable set of earbuds from JLab. But it does hurt.

You probably know this answer by now. The $150 1More Dual Driver ANC are everything the Epic ANC was hoping to be, though for twice the price. If you’re an athlete searching for a similar style at a cheaper price, JLab’s $49 Epic Sport2 would be a solid fit for its features and design.

JLab offers a two-year warranty with the Epic ANC, and the product itself feels durable to the point that I wouldn’t worry about exposing them to intense workouts. I’d say these buds will last long enough to get your money’s worth.

No. The Epic ANC did a lot right, from a comfortable design to its effective features. It did not, however, do enough to distance itself from cheaper options within its own brand, or approach the quality of the more expensive Dual Driver ANC. They’re ultimately good buds, but they’re stuck in no man’s land.