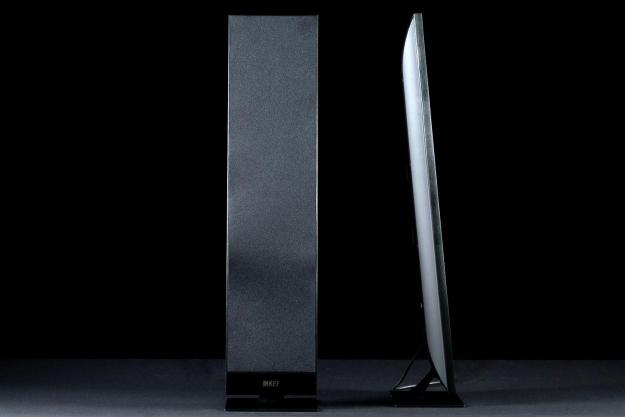 “If you’re looking for a brilliantly intuitive system to bring the clarity of your new TV to 11, KEF’s V300 is a worthy choice.”

In the world of supplemental home audio solutions, it’s all about conciseness and convenience. And nothing spells that out quite as succinctly as KEF’s new V300 digital speaker system. The flat-panel speaker system is designed to seamlessly meld into your system, thanks to its simple setup and its striking, sleek design. The system pulls this off by flanking your flat screen, either on table-top stands or mounted to the wall, and effortlessly following your TV’s volume commands, bringing its sound out of the doldrums and into the light.

At $900, the V300 is an investment, and while you might think a system at that price ought to offer tons of inputs and flexibility, it does not. Instead, the system relies on a newer TV’s HDMI ARC (Audio Return Channel) input, or, if ARC isn’t available, a standard HDMI input paired with an optical digital audio feed. The no fuss design requires all audio sources to pass through your TV, which means there’s no Bluetooth or hardwire connection to play tunes from your smartphone, like most compact home theater solutions. The system is specifically designed to carry out a single purpose as efficiently as possible, and it makes no excuses for that.

We paired the KEF V300 with the Samsung’s UN55F9000 Ultra HDTV – a TV with a relatively decent on-board audio system, by the way – to find out if the minimalist system could perform well enough to earn its keep. Here’s what we discovered.

Opening the KEF V300’s package revealed a collection of modular pieces carefully organized in small compartments. We laid out the different components, which included the sleek little towers stretching two feet high and about 1.5-inches deep, as well as two metal desktop stands in a modern, angled design with rubber padding on the bottom. Also in the box was the brains and muscle behind the system, a slim activation module encased in a graphite metal shell.

A stock of accessories included both HDMI and power cables, two lengths of speaker wire, mounting components for the speakers and module, a packet of screws, and a couple of Allen wrenches to complete the job.

The speakers felt suspiciously light as we pulled them from their plastic sheaths and lay them on the carpet for assembly. The activation module’s cool metal exterior bears a single, blue LED across its polished front face, while the back is outfitted with two spring-loaded binding posts (not clips!) for the speakers, an HDMI input, optical input, power cord terminal, and a subwoofer output. It took us a few moments to get used to the fact that there was no remote control included, nor a volume dial on the module, making it the most succinct design we’ve encountered yet.

…if you have an older TV without an ARC HDMI port, that cable configuration changes, and it might not make sense straight away.

Once we’d assembled the system, it sat harmoniously next to the F9000, striking a clean and modern aesthetic. As temporary owners, we used the included desktop stands instead of wall mounting, but at a little over 3 lbs. each, the speakers are light enough to make the job a simple affair. To that end, an EQ control on the back of the module adjusts the speaker’s frequency response curve to adjust for wall mounting with a quick flick of a switch. KEF also offers floor stands for the speakers at an additional cost.

Each ultra-thin speaker contains a total of three drivers, including a pair of KEF’s proprietary 4.5-inch dual-layer diaphragm midrange drivers which sandwich a vented 1-inch aluminum dome tweeter in between. That tweeter utilizes KEF’s ‘tangerine waveguide’ technology, which is meant to create an even and wide sound field.

The activation module weighs about 3 lbs. itself and rested inconspicuously on our TV stand during evaluation. However, since it requires no line-of-sight for remote control, a more permanent home can be made for the unit by mounting it on the wall, or even on the back of a TV. Beneath the module’s dark, metal shell rests a class-D digital amplification system that pushes 50 watts of power to each speaker. The system claims a frequency response range of 80Hz to a rafter-dwelling 30 kHz.

KEF”s V300 system is so stealthy in its operation and appearance, you might almost forget it’s there, save its superior sound. However, while using the system is child’s play, setting it up might throw you a curve ball. Assembling the speaker stands, and running the speaker wire, is easy enough, but if you think your experience dealing with consumer electronics buys you a pass from reading the manual, think again.

If your TV has an ARC-equipped HDMI input, you’re home free. One cable from that ARC HDMI input to the V300’s module and you’re done. Your television and the V300 system will have a little digital conversation, and sound comes from the V300 instead of the TV’s internal speakers. However, if you have an older TV without an ARC HDMI port, the cable configuration changes, and it might not make sense straight away.

Since televisions without HDMI ARC can’t send an audio stream back down the pipeline, the V300 will need to get its audio signal from the TV’s optical digital output (assuming it has one, most do). Anyone who has set up any number of sound bars or other audio systems might think they were done at that point, but the V300 doesn’t work that way. It still needs an HDMI connection, even to a non-ARC HDMI port, in order to get specific information from the TV that allows the system to work. No HDMI cable, no sound. The user will also want to ensure that the TV is set to output a PCM signal, though most televisions default to this setting.

If you actually follow the quick start guide word for word, you’ll be fine. And once the system is set up, you’ll never have to think about it again. It just works, and it’s beautiful that way.

The V300 has a brilliantly clear sound signature that is remarkably distinct and full of presence. We called it from the very first sonic impact, which happened to be the 20th Century Fox intro at the start of Ridley Scott’s Prometheus. Right away, the horns struck clearly, with brilliant zeal and resonance, and the upper strings were smooth and forward. With further listening, we noted the speakers emitted a bit of a bite in the upper midrange that we found to be too bright in some contexts. But, their lightning quick transient response created a tactile reconstruction of the sound that drew out the subtle nuances of dialog and music and outlined the beaded little intricacies of effects in a visceral display.

As for dialog: If you’ve ever experienced moments in which you missed a whisper…that trouble will likely end with the V300.

Examples of the V300’s superb clarity came at us from every direction, as Prometheus’ dark tale opened before us. The spray from the waterfall at the intro scene sounded almost live, and the bubbling in the water as the creature’s DNA reformed seemed to be spattering at us, displayed with intricate phase shifts warbling in the deep. While high-impact moments like the crackle of turbine engines or the attack of gun shots were carved out well, we were more entranced by the peripheral sounds that jumped from the shadows. We especially enjoyed the multi-layered effect of the ship’s automatic doors that pushed out from both sides of the screen, and flowed across the image in perfect stereo sweeps.

As for dialog: If you’ve ever experienced moments in which you missed a whisper or a non sequitur from a character in the background, that trouble will likely end with the V300. Each nuance, consonant, and stutter from the lips was spit forth in perfect clarity, letting our ears relax and simply take in the sounds.

Music from our CD collection was also handled incredibly well for the most part, as the system displayed rich, resonant timbers from stringed instruments, wafting sustain from cymbals, and a lyrical, expressive clarity in the midrange and vocals. We missed some warmth in the low end of bass and kick drums, and sharper rock instrumentation got too aggressive up top for our taste. But overall, the system’s sweet detail and live presence won us over. We were also able to add some more warmth to the sound by placing the speakers against the wall, using it as a boundary to reinforce the system’s bass response a little. Those looking for richer low end will likely want to wall mount the speakers.

The only real issue we encountered with the V300 may actually be due in part to their own incredible accuracy, which was so engaging we craved for more from the bass region. Unfortunately, when it comes to bass, the svelte towers simply don’t deliver much. After around 150-100Hz, it’s over. That had us longing for a subwoofer for the bulk of our evaluation. The system does include a sub output, so pairing should be easy. But if you’re hoping the V300’s $900 price provides full range sound, you’ll may feel slightly disappointed.

KEF’s V300 is an exhibition of detail, clarity, and dynamic expression capsulized in a super-svelte system. The system looks great, and works seamlessly with your TV, creating a dynamic duo of sight and sound for your home theater. However, buyer beware: though the cost may say otherwise, the V300 is not a full range system, and those who want meaty low end need to keep room in the budget for a powered subwoofer to make these engines take full flight. Still, if you’re looking for a brilliantly intuitive system to bring the clarity of your new TV to 11, KEF’s V300 is a worthy choice.