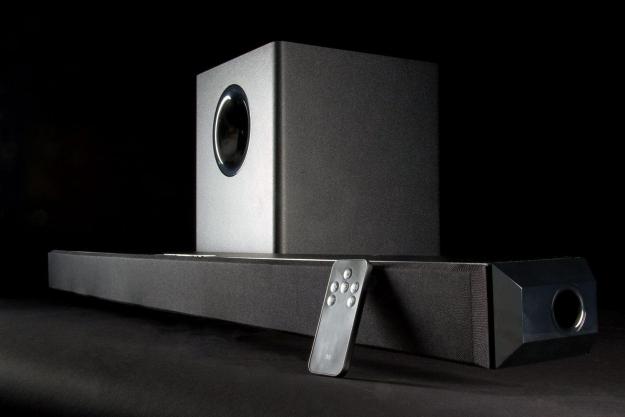 “Monoprice’s 12177 will make your wallet very happy, but it lacks the skills and frills of sound bars costing just a bit more.”

Monoprice is best known for solid home theater accessories at rock-bottom prices, so it’s no surprise the company has recently set its sights on the expansive entry-level sound bar market. However, the latest effort from Monoprice, the unimaginatively titled 12177, enters a marketplace that has been redefined by stellar affordable options from big brands like Yamaha, Sony, and Vizio. In short, Monoprice is under siege in its own territory.

At just under $200, the 42-inch long 12177 is one of the cheapest sound bars we’ve encountered, making it an enticing choice if you’re seeking a bare-bones audio solution to replace the lame-sounding speakers built into your TV. But an influx of capable entry-level options from titans in the industry, often priced just above the 12177 at around the $300 mark, put this budget darling on notice.

Surprisingly, the 12177 sports an MDF cabinet, rather than the plastic sort we’re used to seeing in the entry level. Cloaked in black matte paint and capped with glossy plastic ports on each end the presentation at least looks good – and the wood enclosure is a good start — but the components feel a bit thrown together, betrayed by little manufacturing defects like a crooked optical port around back. The included (tiny) wireless sub is standard fare for the genre, composed of a stout black cube with its own glossy port at the front, and a power key and volume dial on the back.

Accessories in the package include only the necessary power cables, a credit-card sized plastic remote and battery, and adhesive spacers meant to protect your TV stand.

While there’s a definite K-mart vibe to the overall aesthetic, the 12177 includes most of the same trappings you’ll get in any entry-level sound bar from the bigger players. Inputs include an Optical digital input, a Coaxial digital input, an analog RCA input, and a 3.5mm analog input. There are three different DSP modes available, including Movie, TV, and Music (which spreads the sound out wide for better perceived stereo imaging), and the bar even employs the newer Bluetooth 4.0 protocol for efficient wireless streaming from your mobile device.

Under the hood, the 12177 features a pair of 1.8 x 6-inch drivers powered by 20-watts each. The subwoofer sports a down-firing 6.5-inch driver powered by a claimed 60 watts, making for 100 watts total system power — not exactly a powerhouse, but more than enough juice to get the job done in most settings. The claimed frequency response is 30Hz-18kHz.

Still, there’s no skating around the fact that this is a bargain sound bar, saddled with some quirks that set it apart from stalwart competition, like Yamaha’s YAS-203. For starters, the system has virtually no visual display, relying solely on a small array of LEDs that are effectively invisible from the couch. That makes it pretty difficult to decipher settings like volume level, or which source or DSP mode is engaged.

The extremely basic remote doesn’t help much in the way of clarification. For instance, choosing a digital input requires repeatedly tapping the source key until one of two LEDs lights up under the “DIN” input — a blue LED means Optical, while an orange LED indicates Coaxial. And, of course, you’ll have to stand over the bar to see it. There’s a similar story for switching between DSP modes. Each mode is indicated by a single LED, which glows steady blue for 10 seconds for Movie mode, blinks for TV, and goes dark for Music. We used Movie mode for most of our evaluation (we think) which sounds a lot like TV mode.

The 12177’s MDF cabinet is a good start, but the components feel a bit thrown together.

Another quirk comes from the wireless connection of the bar and sub, which operate across four different wireless channels in order to alleviate any signal interference. Both components must be set to the same channel to link up, engaged by a switch on the rear of each. It’s a thoughtful inclusion, but most new systems we encounter simply auto-connect without issue. Moreover, we still had trouble with the sub and bar linking up a few times.

By virtue of the 12177’s ultra-low price point, you’ll also give up some of the frills you’d find in options priced right above it — the principal omission being the ability to use your TV remote for control of basic functions like volume and power. That makes it a bit of a pain to use the bar as a full-on surrogate for your TV speakers, and also presents a good opportunity to lose the teeny remote in the couch cushions.

Once you get the hang of the 12177’s rather ambiguous display system, setting the sound bar up is pretty simple. The easiest way to connect is via the Optical digital output of your TV. We normally recommend connecting directly to a Blu-ray player or game console for better sound, but the bar’s low price and lack of onboard surround sound decoding makes that a moot point.

If you do connect directly to a Blu-ray player, you’ll want to adjust the sound settings to output PCM only, or the bar simply won’t work. (Most TVs output a downmixed PCM signal by default.) You’ll also want to select the correct EQ setting at the back of the bar, which offers optimized sound for either a wall mount or stand mount situation.

The 12177 certainly brings some talent, capable of adding a good dose of chutzpah to your TV room. The midrange provides some welcome warmth, and the sub’s punch is an immediate upgrade for those who’ve been getting by with just their TV’s on-board speakers. Explosions, gunshots, and the revved engines of cars and motorcycles all benefit significantly from the system’s potency, all while scraping the very bottom of the price barrel.

If you’ve got the means to spend a little more, we highly recommend doing so.

There’s also an unexpected silvery brush of brilliance in the upper midrange that helps bring some extra presence to dialog and effects like gravelly footsteps, while adding some definition to the attack of instruments like brushes scraping on a snare drum, or the sharp cut of an acoustic guitar. The effect was immediately engaging in moments like Hermione’s whispered “Obliviate” spell at the beginning of Harry Potter and The Deathly Hallows, cutting through lucidly.

However, that extra sparkle at the top of the midrange can be deceiving: Listening deeper exposes inconsistencies elsewhere in the sound to let you know, unfailingly, that this is a budget system. The very center frequencies — the meat of the sound where a good portion of dialog resides — are prone to fuzziness, sanding down details at times. The same goes for the treble, where upper register instruments and effects are often obscured into a soft haze.

In addition, the subwoofer has a tendency to sound sluggish. It gets the job done when it comes to simpling rumbling with on-screen action, but it’s often sloth like — especially when compared to the firm, musical punch of the aforementioned YAS-203.

And really, that’s the fundamental issue with the 12177 — while the system offers some solid performance that is in no way disagreeable, we’ve been spoiled by more capable systems that rest a mere hundred dollars or so up the ladder.

Monoprice’s 12177 is a capable system targeted directly toward those looking to spend the least amount of money possible while still making a notable improvement in their TV’s sound quality — and in that context, it does its job. However, in an ever-evolving entry-level sound bar market, it doesn’t have the skills or the frills to compete with bars costing just a little bit more. If you just can’t go any higher, the 12177 may suffice, but if you’ve got the means to spend a little more, we highly recommend doing so – in the long term, you’ll be glad you did.