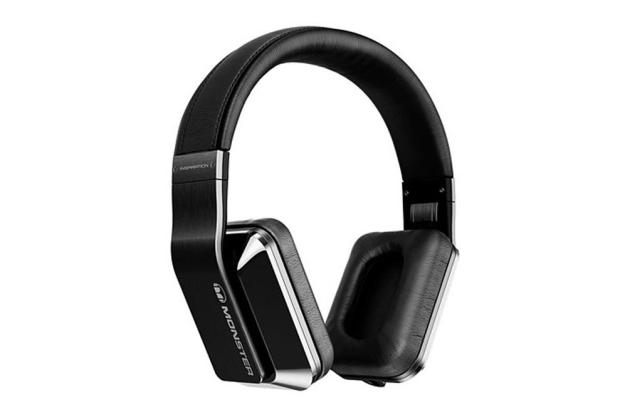 “We highly recommend them and happily bestow these fine cans with our Editor’s Choice award considering their stellar sound, though we should note that this active noise-canceling version loses half a point for slightly less effective noise-cancelation performance relative to its competition.”

Since parting ways with Beats By Dr. Dre, Monster has continued to release one new headphone product after another, proving it has no intention of leaving the space it arguably helped to re-invigorate. Sonically, its latest headphone offerings have been a far cry from that of the Beats brand — which, for anyone not a fan of that signature bass-heavy sound, should be great news.

The Inspiration is a full-sized, over-the-ear headphone clearly aimed at a different kind of listener – one who enjoys a more balanced, engaging delivery of sound delivered by a headphone with some style.

There are two versions of the Inspiration: a passive noise isolation version – which essentially blocks sound by nature of a good seal around the ear – and an active-noise-canceling model – which uses active electronics to block out noise. If you’re only interested in the standard, passive-noise-isolation version, then you can check out our review of that version here. This review will forego some of the details mentioned in the aforementioned review in favor of covering the specifics involved with the noise-canceling version.

Monster provides one of the best out-of-box experiences in the industry – and it needs to. If you’re going to charge $300 for a pair of headphones, excellent sound and comfort isn’t enough. It’s important to instill a pride-in-ownership feeling from the moment the cellophane is removed from the box, and Monster nails it every time.

In the case of the Inspiration, there was a little less for us to take in compared to the ear-tip buffet we revealed in our Monster Gratitude review; still, Monster offers some fun touch-points. The high-quality box, held shut by an integrated magnet, pulls open like an encyclopedia with the tug of a silk tab. Inside, one the left, is a pouch containing some product literature, a little congratulatory note from Head Monster, Noel Lee, and a microfiber cleaning cloth. Inside the deep, business end of the box is the Inspiration, folded up inside a handsome, soft leatherette case outfitted with a Carabiner and an integrated handle strap.

In the case of the Inspiration, there was a little less for us to take in, compared to the ear-tip buffet we found packaged with the Monster Gratitude. Still, Monster offers some fun touch-points. The high-quality box, held shut by an integrated magnet, pulls open like an encyclopedia with the tug of a silk tab. Inside, one the left, is a pouch containing some product literature, a little congratulatory note from Head Monster, Noel Lee, and a microfiber cleaning cloth. Inside the deep, business end of the box is the Inspiration, folded up inside a handsome, soft leatherette case outfitted with a carabineer and an integrated handle strap.

Pulling the headphones from their pouch further reinforces the point that your money was well spent. The Inspiration have a rock-solid feel to them without being too hefty. Inside the leatherette pouch we found three individual headphone cables: one standard cable, one with a single-button inline microphone (presumably for non-iOS mobile devices) and another with a three-button inline microphone compatible with iOS devices.

While we love the selection of cables, we have to admit we were a bit disappointed not to find a ¼-inch (TRS) adapter included. These are just the sort of cans you’d like to connect to your A/V receiver, integrated amp, audio mixing board or high-end headphone amplifier, and to do that, you need an adapter.

The Inspiration feature lushly padded and extremely soft leatherette-covered earpads, and the underside of the headband is a perfect match. You can pick up the Inspiration in either white or black – we received the black version. Note that the active noise-canceling version covered here sports glossy black earcups while the passive version is matte black.

As previously mentioned, both earcups fold in for compact storage. It is worth noting that the double-hinged joints feel robust and resilient, just like the rest of the headphone’s design.

Monster has designed the Inspiration so that the outer headband is interchangeable. In addition to the black leatherette headband already installed on the headphones, Monster includes a glossy black option that looks a bit like snake-skin. We’re not fans of the texture, but we do like the looks of some of the other 16 colors and patterns Monster shows off on its website.

In typical Monster fashion, specs on the headphones — including weight, driver size and impedance and rated percentage of noise-cancelation – are not disclosed. We do, however, feel comfortable saying that these headphones will work well with just about any device.

No, there’s no actual setup, but we did want to mention that the Inspiration benefit from a decent break-in period. We recommend letting them play for about 30 hours or so before you pass any judgment. In our experience, the Inspiration’s bass performance tightened up a bit after a little workout.

As with most headphones, the level of comfort enjoyed (or lack thereof) while wearing a set of cans is going to vary based on head size, ear size, ear shape and the general disposition of the wearer. Some folks like more clamping force than others and some – those without hair, for instance – will prefer a generous amount of padding on the headband while others don’t really care. With that in mind, we’ll describe our personal experience and relay that of others for a little perspective.

The Inspiration clamping down on the ears with more force than average. The benefits are an excellent seal and a reduced reliance on the headband for support. As such, those with narrow heads will probably enjoy the secure feeling the Inspiration provide, while those with wider heads may find the fit a little tight. With that said, we had a few folks with wide noggins try the Inspiration on and they had no major complaints, though admittedly the headphones weren’t worn for longer than five minutes and it is usually long-term listening sessions that can bring discomfort about.

We found the headband to be well padded enough for just about anyone, though one baldy on staff expressed distaste for the headband’s feel. We think the clamping force is strong enough that one could alleviate any undue pressure by popping the headband up so that it doesn’t exert force directly on the crown of the head.

While not clunky, the Inspiration are a heavier headphone, so they aren’t ideal for use with activity or exercise, though we think they will stay put for most folks.

As with any headphone that uses a less-than-breathable material on its earcups, the Inspiration can make for some warm ears. That’s the price you pay for excellent passive noise isolation and, from our view, it is worth it.

This performance evaluation applies only to the passive noise isolation version of these headphones. For a detailed analysis of how the noise-canceling version faired both in passive and active mode, be sure to visit our companion review here.

We’ve seen plenty of comments on headphone enthusiast message boards expressing concern that the Inspiration’s bass and treble regions might be intentionally accented, ala Beats By Dr. Dre products. Let us lay those concerns to rest: Nothing could be further from the truth.

The Inspiration reproduce exactly what is on your recordings – nothing more, nothing less – for better or for worse. Though we’ve had the pleasure of listening to some stellar-performing headphones in the recent past, we can’t think of another pair (save, perhaps, the Sennheiser HD 800 or HD 598) which were so adept at exposing poor-quality music tracks for all their limitations.

As we worked our way through a wide variety of tracks, we noted that the Inspiration exposed recordings for what they were, be they well produced, heavy on bass, lean on bass, overly bright or subdued and warm. Though the Inspiration certainly have their own sound stamp, they never get in the way of the recording. In this way, they are very similar to the Denon AH-D1100.

Naturally, there are a couple of common concerns when it comes to active noise-canceling headphones. Most folks want to know if the headphones will still perform when the battery dies. Second to that come questions about what kind of sonic differences exist between passive performance and active performance. In addition to these concerns, the Inspiration raise another: How do the entirely passive Inspiration compare to their active-noise-canceling counterparts?

Here are your answers: Yes, the Inspiration perform with no batteries installed or if the batteries die — you just don’t get the benefit of the active noise-cancellation. As for active vs. passive performance, there is a notable difference in bass and treble levels once the headphones are switched into active mode. This is a good thing, as even with noise-cancelation in effect, the extreme frequencies take a hit from the droning white noise experience during airplane, train and car travel. Finally, we are pleased to report that the entirely passive Inspiration and the passive mode of the active version are nearly indistinguishable from each other. If you’ve been looking at these headphones and wondering if you make any sacrifice going with the active version, rest assured you do not. The passive performance of the active noise-canceling Inspiration is every bit as good as its counterpart.

Now, as for the effectiveness of the noise-canceling circuit: the Inspiration are not as effective at cancelling noise as, say, the Audio Technica ATH-ANC9 or even the otherwise unimpressive Fanny Wang 3000 series. Still, they are effective and should more than satisfy all but the most frequent traveler. We imagine future iterations will show improved noise-canceling performance.

There’s no getting around the fact that the Inspiration are pricey. At $300, they face some stiff competition from the likes of Sennheiser, Audio Technica and Denon. But, from an audio performance standpoint, the Inspiration are absolutely on par with – and in some ways, better – similarly priced models from those established headphone manufacturers. As for noise-canceling, there are stronger options, but the degree of difference is slight. If luxurious feel, stylish design and audiophile-grade sound quality are top priorities, the Inspiration need to be on your short list for consideration. We highly recommend them and happily bestow these fine cans with our Editor’s Choice award considering their stellar sound, though we should note that this active noise-canceling version loses half a point for slightly less effective noise-cancelation performance relative to its competition.

Topics
B&W’s flagship Px8 headphones cost way more than they were supposed to
What is transparency mode and how does it work?
Apple AirPods Pro 2: Everything you need to know
Bose QuietComfort Earbuds II hands-on: stunningly quiet
The best romantic comedies on Netflix (December 2022)
Best headphones for 2022: Sony, Bowers & Wilkins, and more
The best TV brands of 2022: from LG to TCL, which should you buy?
The best home theater projectors you can buy in 2022
Looking for a big TV? This 75-inch TCL is $500 at Best Buy
1-day flash sale drops the price of this 70-inch TV to $400
The best 4K TVs for under $500: premium picture on a budget
The best comedies on Hulu right now
The best sci-fi movies on Hulu right now