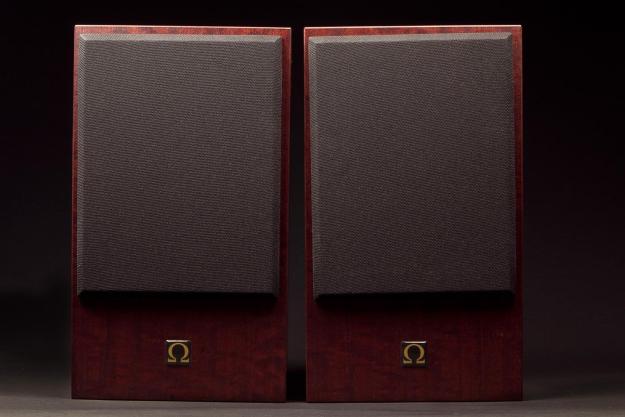 “These outstanding speakers from a small manufacturer in Connecticut easily compete in the big leagues with some of the most popular brands in audio.”

Building a satisfying system around an affordable pair of speakers isn’t always easy. Sometimes the speaker expenditure alone can eat up most of your budget. Beyond that, it can be a challenge to find something that will continue to shine as your system and tastes evolved. But if you have $600-$895 to spend on a pair of speakers, the Omega Speaker Systems Super 3T Desktop speakers might just fit the bill. Once you hear them, we think they will shatter any preconceptions you have about the delta between high-end and entry-level audio.

Removing the Super 3T Desktops from their sturdy packaging inspired confidence before we even connected them to our system. Omega CEO and Head Designer, Louis Chochos, makes each pair by hand, and while you’re not getting a pair of Sonus Faber Guarneri Evolution for $600, the Makore finish on our review pair was utterly gorgeous, eliciting high praise from everyone who took a peak. The exotic veneer brings the price up to $895, but that’s still a bargain considering the sound quality.

For $600, Chochos offers three high quality laminates: EKO Neutral Satin, EKO Neutral Gloss, and EKO Natural Sycamore. For an additional $200, Omega offers Cherry or Walnut real wood veneers. Omega has more finishes available on its website, but we really find the Makore, Ebony, and Zebra Wood to be the most appealing, considering the reasonable pricing.

The Omega speakers are extremely revealing, but don’t confuse that with ice-cold neutrality.

Your money goes further with Omega on the hardware end as well. Cheap plastic binding posts are still acceptable to some on speakers below $1,000, but we think that’s being cheap for the sake of being cheap rather than offering the customer the right hardware. Omega installs solid metal binding posts on all of its products, and the difference in quality was noticeable as we tried to connect some rather bulky cables.

The Super 3T Desktop speakers come with a pair of magnetized speaker grills that look great when attached, but we feel the sound quality improved with them off. Omega also includes a set of heavy-duty spikes and coasters to properly install the speakers on your desktop.

Between the quality of the finish, the solidity of the cabinet, and the decision to spend more on the hardware, the Super 3T Desktop made us forget that they were only $600 in a hurry.

The Omega Super 3T Desktops are a single-driver, full-range speaker with a quoted frequency response of 60Hz – 20 kHz. Their 94dB sensitivity rating and 8 ohm impedance make them an easy load to drive for virtually any amplifier.

The heart of these unique desktop speakers is their proprietary 4.5-inch, full-range OmegaFiberCone drivers. The RS5 driver utilizes a powerful Ferrite motor and a 19 mm voice coil to extend the high frequencies past 20kHz. Chochos has spent years developing the drivers in his designs and is particularly proud of the RS5, which Omega manufactures in the United States.

Many years ago, during a factory tour at Paradigm, we learned a valuable lesson about the importance of building a quality cabinet, even at the entry-level where customers may spend only $300 on a pair of speakers. The folks at Paradigm were fanatical about getting the box right on even its least expensive products, certain the approach differentiate itself from the competition. They were right.

We’re not sure if Louis Chochos ever took the tour, but he’s equally as fanatic about the importance of a properly engineered and well-constructed cabinet. We could tell that the Super 3T Desktops were a little bit different based purely on their weight – we don’t usually see 14-pound speakers at this level. Contributing to the weight is the Super 3T’s triple-layer cabinet construction, along with the finish veneer, and the core is manufactured from softwood MDF. All of the layers are cold pressed using PVA (Poly Vinyl Acetate) adhesive and the cabinet features ladder bracing for added rigidity.

The cabinets are post-formed (veneered after the cabinet has been built), so that the edges are hand chamfered, filed, and faceted; it’s remarkable that you can get this much quality for the asking price.

Setting up the Super 3T is a relatively painless endeavor, unless you stick yourself with one of the extremely sharp spikes used for decoupling the speaker from your desktop or media console.

Because each pair of speakers is made-to-order, Omega will actually inquire about how you plan on setting them up. All of the possible configurations utilize only three spikes, but users can decide if they want the speakers to tilt upward, downward, and at different heights. The supplied coasters made it easy to maneuver the speakers around our desktop without scratching the surface with the spikes.

For the purposes of our review, Omega supplied a pair of Super 3Ts that could be placed on our desktop and tilted upward so that the driver was at ear level with us sitting in our desk chairs. We started with the speakers set at 3-feet apart, with a 24-inch iMac placed directly between them.

Because the Super 3T Desktops are ported on the bottom of the enclosure, users can get away with positioning the speakers close to the wall behind them without having to worry about the bass overloading the space. We alternated between setting the speakers slightly forward of the screen and pushing them all the way back to the wall to determine if the bass port was having any kind of significant impact on the low end response.

After a fair bit of experimentation, we found that the Super 3T Desktops sounded best with only a modicum of toe-in towards our desk chair. The presentation was fuller as a result and the soundstage and imaging were only marginally less precise or deep. When all was said and done, they ended up being placed 32-inches apart and 8-inches from the wall behind them.

We borrowed, begged, and pulled some of our favorite amplifiers out of storage to put the Omegas through a genuine Hell’s Kitchen (we’ve been watching a lot of that recently). Be glad that we did, because it turns out that the Super 3T Desktop speakers are rather fussy.

From a cabling perspective, we had rather consistent results with Analysis Plus Black Oval 12, AudioQuest X2, and Audience Au24e speaker cables, though any all-copper speaker wire should do just fine.

The Super 3T Desktops require close to thirty hours of playing time before the drivers loosen up and the bass output begins to throw its weight around. Part of what makes the Super 3T Desktops so much fun to listen to is that they don’t require a lot of power to work in a near-field listening set-up.

Omega designed these speakers to work with as little as 3 watts per channel, which opens the door to single-ended triode amplifiers based around the venerable 45, 2A3, and 300B output tubes. And while we loved the sound quality when paired with one of Don Garber’s gorgeous Fi power amplifiers (hand-made in Brooklyn and an18 month wait), the Super 3T Desktops are better served with something a little beefier if listening tastes involve anything other than acoustic-oriented jazz, blues, chamber and folk music.

You can pretty much drive them with anything, but when it comes to power, the Super 3T Desktop speakers prefer quality over quantity.

You can pretty much drive them with anything, but when it comes to power, the Super 3T Desktop speakers prefer quality over quantity. We heartily recommend them with amplification that will infuse their presentation with some degree of color. If you stick with cold or utterly revealing neutrality, the final results will sound great for about thirty seconds as you marvel at the level of transparency and detail, but then become fatiguing, and ultimately hard to focus on.

Based on our experience, we’re convinced the Omega prefer tubes over solid-state; they sound particularly engaging with amplifiers based around EL34 or EL84 output tubes. That means anything from PrimaLuna, Line Magnetic, or Decware is a good option and well within the realm of financial sanity. But if you prefer to use solid-state or class ‘D’ amplification, Red Wine Audio, Arcam, Rega, and Bel Canto are a good place to start. All of them will inject some much needed warmth, deliver enough control to extend the bass response, and be more than competent at keeping your toes tapping.

The Omega speakers are extremely revealing, but don’t confuse that with ice-cold neutrality. They are anything but sterile. Their midrange is clean and wonderfully transparent, but nobody is going to confuse them with a pair of Harbeth Compact 7ES-3s, or Spendor SA-1s which offer reference quality midrange resolution in a relatively small cabinet; albeit at much higher prices.

The Super 3T Desktops have a relatively airy top end which won’t bite your head off if you push them too hard, though, admittedly, that is really amplifier dependent. Drive them with something too aggressive or cool, and the treble is going to annoy you within a few tracks. Drive them with something that is slightly soft or rolled-off in the treble, and you’ll never notice the issue and think they sound brilliant with vocals.

As much as we love these speakers’ ability to vanish before your eyes – their imaging and soundstage capabilities are second to none at the price point – there is a trade-off in bass response. The bass can sound anemic with the wrong amplifier – an important consideration since the Super 3T Desktops don’t reproduce much bass response below 70 Hz as it is. But we found that using an amplifier that gave the upper and mid-bass some sense of texture and control was the proper remedy.

It’s easy to forgive the sin of omission in a $600 speaker, especially when it’s working with a 4.5-inch full-range driver.

The Super 3T Desktop excel with slightly easier fare than “One” from And Justice for All if you feel the need to crank the volume as high as it can go. And we were more than just a little impressed with how it handled Kraftwerk, Depeche Mode, Low, or even The Doors at above average levels.

There is no question that the Omega speakers benefit from some boundary reinforcement, but when placed a few feet from your head on your desktop, your focus will be on how they handle 150 Hz – 20kHz; they accomplish that task quite well.

The highest compliment that we could possibly bestow on the little boxes from Connecticut is that they sound like mini-electrostatic speakers – transparent, detailed, and amazingly quick. Match them up with an amplifier that plays to those strengths, pour a few glasses of a hearty red, and you’ll be drunk before the second bottle is finished.

The Omega Super 3T Desktop speakers may never grace the front covers of the audiophile rags, but don’t let that fool you for one second into believing that these outstanding speakers from a small manufacturer in Connecticut can’t compete in the big leagues with some of the most popular brands in audio.

Beautifully crafted and finished, the Super 3T desktop are extremely easy to drive and one of the most transparent-sounding pair of speakers we have heard from any manufacturer under $1,500. They represent one man’s dream of building high quality custom-made speakers at price points that most of us can afford, and we think that makes them a very special product, indeed.