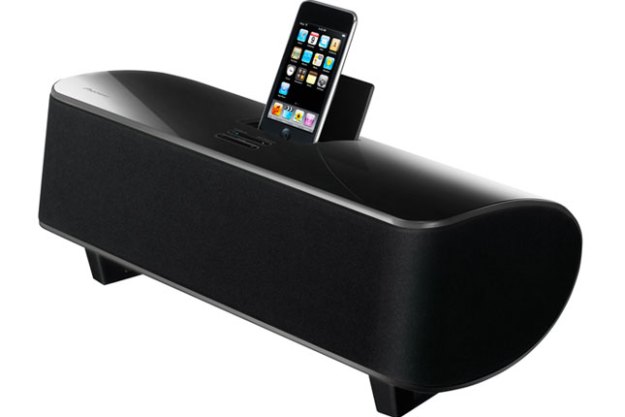 “Competing manufacturers could stand to learn a thing or two from Pioneer’s approach to the extremely popular iPod speaker dock.”

As part of Pioneer’s new audition series, the NAS3 represents the company’s no-compromise attitude toward digital music playback. Outfitted with a rigid cabinet, premium finish, powerful amplifiers, proprietary drivers and Bluetooth wireless capability, the NAS3 seems to have what it takes to compete with some of the more esoteric of the high-end iPod speaker docks available today. In this review we put the NAS3 through its paces to see how its performance stacks up next to the competition.

Straight out of the box we notice the NAS3’s weight to size ratio. While only 8.3 x 16.5 x 5.8 inches, it comes in at a relatively hefty 12 pounds. Our guess is that much of this heft is due to the “double isolated” cabinet – and what an attractive cabinet it is! Our review sample was finished in a glossy piano black finish with gently rounded edges that softens its appearance. The front and sides of the unit are covered in a jet-black grill cloth that is so dark it is difficult to distinguish from the rest of the cabinet. The top of the cabinet is kept extremely clean with only a few recessed buttons for operation and a flip-up lid that hides the docking interface.

Included in the box with the NAS3 dock is a power cable, remote control and user manual. You can pick up the optional Bluetooth adapter chip for an extra $99.

Pioneer did a great job of making the NAS3’s appearance both sleek and unobtrusive. We’ve recently reviewed some docks that looked more like weather balloons than audio equipment and can appreciate the NAS3’s straightforward, yet attractive aesthetics.

Beneath its handsome shell, the NAS3 carries a serious arsenal of technology to support its no-compromise attitude. Armed with two 15W amplifiers, two 2” drivers and a 4” down-firing subwoofer, this dock seems to have what it needs to produce some serious sound. On the rear of the unit we find both composite and HD-capable component video outputs for displaying videos on your favorite monitor, an external audio input (1/8” “mini”) to allow playback of non-iPod devices and a slot for Pioneer’s included Bluetooth chip.

The Bluetooth wireless capability appears to be a major selling point for the NAS3. Not only does it allow iPhone owners to carry their phone around with them while listening to music wirelessly, it also allows non-iPhones, laptop computers or any other Bluetooth enabled audio device to send a music signal to the NAS3 for playback.

We do have a couple of design quibbles to mention: It would be nice to see some iPhone/iPod menu control integrated on the remote control. Perhaps this was left out due to the unit’s wireless audio features, but sometimes you want to charge your phone and listen to music at the same time. For those moments, a little more control from the remote would be handy. Also, we found Pioneer’s claims that the NAS3 included bass and treble controls to be misleading. It turns out that the only tone controls available are those found in the connected iPhone or iPod and it’s a bit of a process to get to them. An on-board, on-the-fly adjustment option would be nice since most folks’ music files can be eclectic and beg for frequent adjustment.

After allowing the NAS3 to break in for about 50 hours, we began our listening tests. Per our usual audition process, we used the NAS 3 in a variety of environments and with a diverse selection of music both compressed and uncompressed.

The NAS3’s high frequency reproduction was pleasantly subdued. This isn’t to say that it sounded veiled or muted; rather, it simply steered clear of the “aggressive and annoying” treble that we’ve heard a lot of lately. Cymbals had sparkle and verve, but maintained a smoothness that was conducive to long, fatigue-free listening sessions. Heavily compressed tracks, while clearly inferior to their uncompressed counterparts, did not sound quite as harsh or “warbly” as they have on other high-end iPod speaker docs we’ve tested.

The NAS3’s midrange reproduction was similar to its treble attributes-clear, clean and pleasant. While vocals were not particularly warm or “open”, they did sound fairly natural and perhaps a little bigger than we expected from such a compact unit. Generally speaking, the NAS3 reproduced highs and mids that did a great job of being musical without drawing undue attention.

The same cannot be said for the NAS3’s bass response. Right out of the box, we noticed that bass seemed to be a little heavy and the more we listened, the more the bass frequencies seemed to dominate the larger musical picture. Initially, we considered that the NAS3’s close proximity to a wall may have been boosting bass frequencies to an undesirable level, so we relocated it to a large room and placed it more than four feet from any large, flat surface. Even after its relocation, the NAS3 still seemed a bit bass heavy.

We looked to the NAS3 for tone control options and found (as previously noted) that the only tone controls available were within our iPod or iPhone devices themselves. We chose a “flat” EQ option in our iPhone but did not notice a significant change in the bass response. After some considerable testing and investigation, we surmised that the conspicuous bass output was not just an issue of relative level. In fact, the tuning of the bass ports on the NAS3 seemed to emit a “one note” bass effect that dominated the room when music was being played. Bottom line: Bass on this unit is a little boomy. If you dig big, booming bass, then the NAS3 will deliver it.

Outside of the tonal response, we found the NAS3 did a good job of filling a room with sound. Its rigid cabinet held together well as we pushed the volume to its limit (well beyond comfortable levels) and had a soundstage and stereo separation that were impressive for such a compact unit.

Next, we connected the included Bluetooth wireless audio adapter. Setting up the wireless adapter wasn’t particularly difficult, but it certainly wasn’t plug-and-play, either. Users will want to consult the NAS3 manual (the Bluetooth manual isn’t very helpful) in order to get things set up properly. Once set up and paired with our iPhone, we ran some of the same test tracks that we had used in our “hard-dock” audio testing. What we found was that, at close range, the Bluetooth audio was decent. There was an FM radio quality to the high frequencies that was noticeable but not distracting. Everything else seemed to sound very similar until we tested the range of the wireless adapter. Given that there is a huge variance in the amount of electrical interference someone will experience from one home to another, we guessed the effective range of the Bluetooth wireless adapter to be able 30 feet. At that distance, we started getting inconsistent results that seemed to be influenced by what was standing in between the iPhone we used and the NAS3. We found that the signal would either cut out, or be so compromised that it was hard to listen to. With a clear line of sight, we think that the adapter’s range could stretch beyond 30 feet, but we aren’t sure what the quality of the signal will sound like at that distance given that our limit was 30 feet.

The NAS3 by Pioneer is a very capable, attractive iPod speaker dock. At $449.00 we would like to see a few more convenience features and some more control over the sound, but we can’t argue with the fact that this dock is exceptionally well constructed. Booming bass aside, the NAS3 sounds pretty fantastic-even at ridiculously loud volumes. Pioneer is certainly on to something here. Competing manufacturers could stand to learn a thing or two from Pioneer’s approach to the extremely popular iPod speaker dock.

The best noise-canceling headphones for 2022
Best headphone deals: Save on Beats, Bose, and Sony
The best soundbars 2022: which should you buy?
Best streaming devices for 2022: Apple TV, Roku, and more
A perfect gift for Apple fans, AirPods Max are $100 off today
Turn up the volume with the SVS Prime Wireless Pro speakers
The best romance movies on Netflix right now (December 2022)
Apple Music Sing brings karaoke singalongs to iPhones, Apple TV
The best stand-up comedy on Netflix (December 2022)
How to buy over-the-counter hearing aids
The best shows on HBO Max right now (December 2022)
Amazon Echo Show 15 is getting the full Fire TV update today
50-inch Samsung Frame TV is $400 off — but hurry