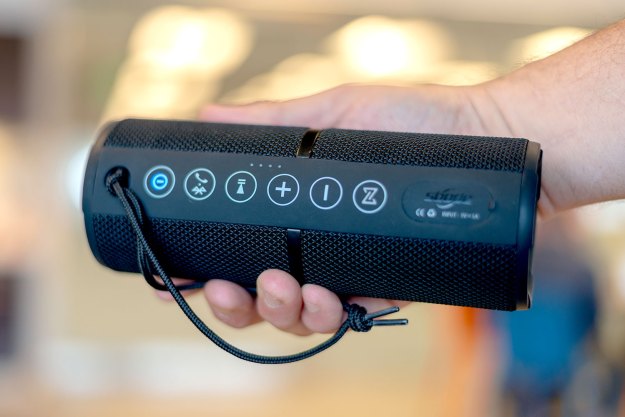 When you think wireless speakers, well … you probably don’t think Sbode. As professional speaker reviewers, we had never heard of Sbode, a company that doesn’t even appear to have a website (though it does have a Facebook page).

Still, the M400 wireless speaker shows up near the top of any Amazon search, with a Best Seller badge and a glut of five-star reviews. Despite some serious questions about the authenticity of those reviews, we felt we had to get one of these $50 speakers and find out whether it’s deserving of such praise. In the end, we got two (the pair is able to link together in stereo), and they’re pretty decent – though some features work better than others.

Firstly, to clear up any confusion, while the packaging is clearly labeled “Sbode M400 Multi-function Wireless Speaker,” the Amazon page (which is the only place you can buy the speaker, as far as we can tell) doesn’t explicitly say “M400” in the title. That’s the model number, though.

The speakers arrived in basic rectangular boxes, sealed magnetically. Inside, the speakers were sandwiched between two pieces of thin, molded plastic, and below that we found user manuals and two cables in each box – MicroUSB (for charging) and a 3.5mm auxiliary cable. The packaging does not scream “premium,” nor did we expect it to at this price.

Aesthetically, the Sbode reads as an amalgam of popular Bluetooth speakers. It’s cylindrical, about eight inches tall, and very light, weighing just about a pound. With its woven mesh exterior, a nylon hang strap, and brushed aluminum passive radiators on each end, the M400 is nearly a dead ringer for JBL’s Flip 4. In particular, the TWS icon (see upper right corner here) appears to be cribbed directly from the logo for JBL’s Connect + system, which also links multiple speakers together.

Unlike the Flip, the M400 is awash in buttons, all aligned vertically down the front; there are dedicated buttons for power, play/pause, volume control, True Wireless Stereo (TWS) pairing (more on that below), and a button that controls phone calls and Bluetooth pairing. All the buttons offer satisfying haptic feedback, and next to them, there are four little LED indicators to convey battery level. The speaker is IPX6 rated for splash and dust protection, so it’ll survive most water trouble, but you shouldn’t submerge it.

Below the buttons, along the front, is the little pry-open flap endemic to splash-proof speakers. Underneath it, you’ll find the auxiliary port, the power port, and a slot for a Micro SD card – a feature we haven’t seen on any other speaker. If you want to play music this way, though, you have to connect the speaker directly to a computer. The M400 supports MP3, WMA, WAV, APE, and even FLAC files.

The M400 also has a built-in FM radio tuner, which seemed like a cool feature at first – and it is, in theory – but without a digital readout of any kind, you just press the volume buttons to change stations and hope for the best. The user manual mentions that you can “save” stations, but it doesn’t tell you how to get to those saved stations, so … good idea, poor execution. The speaker’s battery lasts for 6-8 hours, which is far from impressive, but not embarrassingly bad either. Again, the $50 price tag must also be considered.

Setting up the M400 is a cinch. Power it on for the first time and it’ll automatically enter Bluetooth pairing mode. To set up TWS you’ll want to power on both speakers, enter Bluetooth mode — tapping the power button cycles through modes (Bluetooth, aux, FM radio) — then press the TWS button on each speaker once.

We were impressed with the lack of lag or signal interference when pairing two speakers.

An audio prompt will let you know they’re paired and, in a nice touch, the TWS button will glow blue on the left speaker and orange on the right. Tapping the power button cycles through modes (Bluetooth, aux, FM radio). We were impressed with the lack of lag or signal interference, as the speakers played stereo audio seamlessly.

Often, cheaper speakers – especially waterproof ones — tend to favor bass response over clarity or balance. That makes sense, considering you need some oomph down low to overcome ambient noise when listening outdoors.

Oddly enough, the M400 is a complete inversion of that formula, offering impressively clear, balanced audio with almost zero bass power. Seriously – even when sitting on hard surfaces, it just doesn’t pop. The passive radiators look nice, but in practice, they’re too passive; if hip-hop and electronic music appeal to you, the M400 won’t do your library justice.

The Amazon page claims that the speaker has some sort of “noise/wind reduction technology,” which rings false, as – even with two speakers synced up – playing them outside proved a fool’s errand. At full volume, we could barely hear the speakers from more than five or ten feet away.

A note: The cylindrical mesh design is a little misleading, as the speaker is in no way omnidirectional. For best performance, the speakers need to be angled correctly, with the control strip facing directly away from you.

According to a little card inside the box, Sbode offers a 6-month warranty and lifetime technical support. For more information, send an email to support@sbode-tech.com.

Poor bass response and outdoor performance limit its potential, but the M400 is a solid speaker for the price, offering a diverse bevy of features which appeal to a wide audience. At just $50, it’s worth a look.

We don’t often review speakers this cheap. For a little more dough, you might be better off with a JBL Flip 3, which offers better sound performance across the board, or if you want better life-proofing, the extremely capable UE Wonderboom is just $55 now. If you want even more bass JLab House Party offers stronger bass in a less-portable package. There are also plenty more options closer to the $100 line – the audio world is saturated with excellent Bluetooth speakers.

Physically, the speaker feels sturdy, though Sbode makes no claims about shock-proofing. Similar speakers tend to last for years, so we wouldn’t expect any issues here.

If $50 is your cutoff for a speaker, this one is as good a choice as any. That said, we recommend saving up a bit more cash for something better.