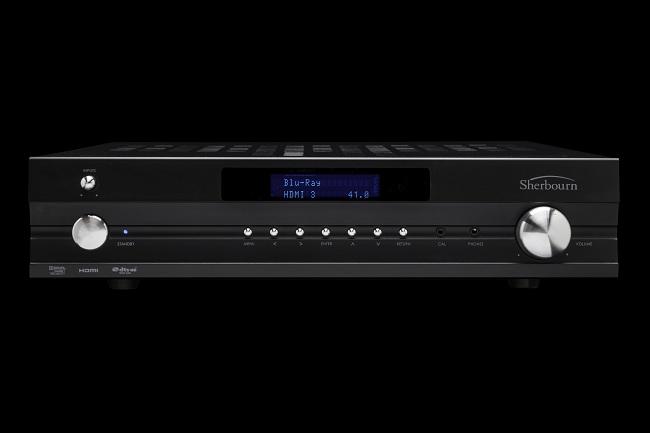 While somewhat late to the party, Sherbourn Technologies – which is better known for its home theater separates and custom installation products – threw its large hat into the A/V receiver world this week with the release of the $800 SR-8100 7.1 A/V receiver.

The first three months of 2013 were a busy time for the market segment with brand new models from Yamaha, Denon, Pioneer, Sony, and Harman/Kardon flooding the market with an extensive array of features and a price ceiling of $1.000. To move customers away from the soundbar market (which has no shortage of heavy hitters at this point), manufacturers have been offering A/V receivers with support for Ultra HD 4K, AirPlay, Bluetooth, and higher quality DACs to support high resolution audio formats. Now it appears Sherbourn is hoping to capitalize on its extensive custom installer network to get its gear rocking home theaters.

Within its steel chassis and solid, extruded aluminum faceplate, the SR-8100 hosts a full complement of audiophile components, including seven channels of discrete, high-quality audio amplification backed by a high-current, low-noise toroidal power supply. The SR-8100 can deliver 80-watts per channel into all seven channels, which should be more than enough power for most dedicated surround set-ups in living rooms or dens.

HDMI performance is also enhanced by Xpressview switching, which is intended to deliver clean, speedy transition between sources, as well as support for 3D, Audio Return Channel, and Consumer Electronics Control (CEC). For advanced remote control, the SR-8100 also includes a trigger input and output, an IR remote input and output, and an RS-232 port for serial control.

The Sherbourn Technologies SR-8100 7.1 A/V receiver does not offer support at this time for Ultra HD 4K, but it does offer audio outputs for two separate zones in your home. At only 17-inches x 4-inches x 16 ½-inches (W x H x D), the SR-8100 will easily fit inside most home theater equipment consoles and custom installation racks, although the rack mounting kit will be an additional expense.

The SR-8100 comes with a five-year warranty and is available now.