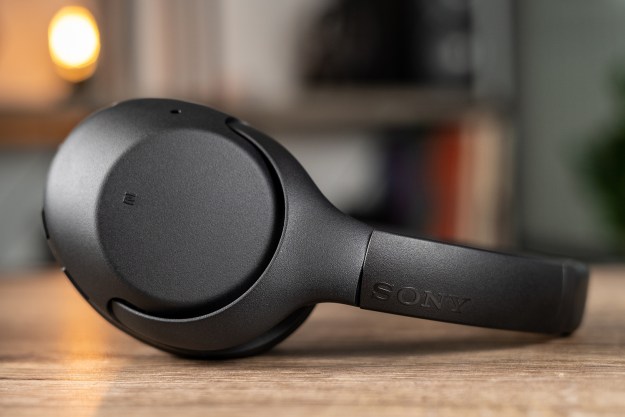 So, you can imagine our excitement when the company announced the WH-XB900N, a new, more-affordable pair of noise-canceling headphones aimed at those who like a bit more oomph in down low. Unfortunately, we’re not nearly as smitten with the WH-XB900N as we are with their older sibling. With mediocre noise reduction and a flabbier sound signature, we’d recommend you go with more appealing options from Panasonic and Jabra, or better yet, pony up the extra $100 for Sony’s competition killers.

Anyone familiar with the look of Sony’s ultra-popular flagship noise-canceling model will immediately see the family resemblance in this new “extra bass” version. With clean, business-class lines, the headphones borrow heavily from the aesthetics of the pricier model. A few shiny bass vents on top of the earcups and some crisp Sony logos on the headband are the biggest aesthetic differences to speak of.

For $100 less you also get similar accessories, including a soft case instead of a hard travel case — not a big deal — as well the same USB-C cable and 3.5mm cable for wired listening.

We absolutely love the user experience offered by the WH-1000XM3, and for the most part, that remains true on the XB900N as well. The headphones share the same intuitive touch controls on the outside of the right earcup, allowing you to swipe up or down to change volume, left or right to change songs, or touch each pad to play or pause music. Holding the touchpad will pull up your voice assistant.

There are only two physical buttons on the headphones themselves: A button on the bottom of the left earcup allows you to pipe in some ambient sound, and turn noise-canceling on or off, and another turns controls power and places the headphones in pairing mode.

The WH-XB900N also have the same auto-pause functionality that will stop your music when you remove the headphones – a great addition for the money — and you can still cup your hand over the right earcup to temporarily pipe in sound from the outside world without taking off your headphones. Sony’s app even allows you to adjust equalization and turn noise canceling on or off — though the headphones don’t have the same noise-canceling chip or ability to pressure-equalize on planes as their more expensive sibling.

The WH-XB900N also have the same awesome battery life (30 hours) and high-fidelity AptX HD and LDAC connectivity as the WH-1000XM3 to stream your favorite tunes in near-wired quality. Plus, a quick charge feature will let you get an hour of playback from a 10-minute charge.

While ease of use is great, these headphones just don’t compete with the WH-1000XM3 or Bose QC35 II when it comes to cutting noise from the outside world. In fact, they don’t even do as good a job as direct competitors like the Jabra Elite 85H and Panasonic RP-HD605N, and they don’t create anywhere near the silence of the two more premium models, especially in louder environments; they’re fine for the office, but they do relatively little to reduce the sound inside a noisy train, bus, or airplane.

Perhaps our biggest gripe with the WH-XB900N is that — due to their sculpted, bass-forward sound — audio performance is significantly worse than the WH-1000XM3. We’re admitted fans of more balanced sound signatures, but even setting that aside, the bass boost added to this “extra bass” model occasionally borders on raucous, especially when listening to pop and hip-hop music.

In fact, when listening to Billie Eilish’s latest album, there was so much low-end thump it seemed to create acoustic distortion for all that came above it at higher volumes, and we experienced similar flabbiness in the higher register when listening to other bass-laden hits.

The headphones do better with indie rock and other genres (and you can turn the bass down with the EQ in the app), but they also lack the same crisp detail we love in the mid and high registers of the WH-1000XM3. When listening to Mac Demarco, Wilco, and others, we especially missed the shimmer of the guitars, which comes through much clearer on the WH-1000XM3, despite the fact that the headphones share the same drivers.

It’s also worth noting just how crowded the headphone field is when it comes to the $250 price tier. Frankly, there are just so many other headphones that sound better than the XB900N at this price, and given that this model lacks the same great noise-canceling as some competitors, like the Panasonic RP-HD605N or Jabra Elite 85H, the sound quality is all the more lackluster.

The WH-XB900N come with a one-year limited warranty that covers faulty parts and workmanship.

The WH-XB900N are a decent pair of wireless headphones, with an impressive feature set and great battery life. But they are significantly less appealing than Sony’s premium model, and are also outflanked by other competitors at or around their price point.

Yes. Those after better performance and sound at a similar price should check out Panasonic’s RP-HD605N or Jabra’s Elite 85H, both of which offer similarly great features and better sound.

Sony makes great products at a very high quality, and we expect no different from these headphones. They should last several years, so long as you treat them with respect.

No. Though we like their features, battery life, and clean design, there are just too many better pairs of headphones at or around the $250 price point. That, plus the fact that the WH-1000XM3 are so good — and frequently go on sale – leads us to recommend you go after another pair in their class or save for Sony’s best wireless cans.

Topics
Klipsch follows the success of The Fives with The Sevens and Nines powered speakers
Marshall’s latest Bluetooth speaker has four drivers for 360 sound
The best waterproof Bluetooth speakers for 2023
The best indoor TV antennas for 2023
This 75-inch 4K TV is $300 off in time for the Super Bowl
The best movies on Apple TV+ right now (February 2023)
What’s new on HBO and HBO Max and what’s leaving in February
The best documentaries on Netflix right now
What’s new on Amazon Prime Video in February 2023
Super Bowl 2023 halftime show: who’s performing?
The best VPN for streaming for 2023
Showtime is being merged into Paramount+
Sling is now 50% off — stream live sports without cable