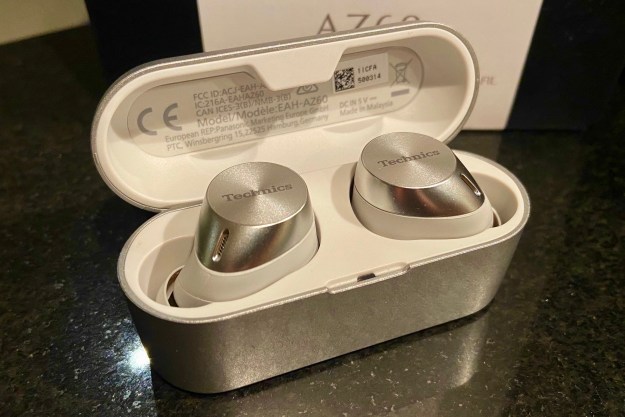 “WIth awesome sound and noise-canceling, the AZ60 are some of the best buds you can buy.”

We were pretty impressed with Technics’ EAH-AZ70 noise-canceling true wireless earbuds. They sounded great and had awesome noise cancellation. But at $250, they were pricey. And a bit bulky. So if Technics could address these issue, and maybe even throw in some additional features, that would make the AZ70 even more attractive. Apparently, Technics said “challenge accepted” because its latest effort, the $230 EAH-AZ60, do just that. How much better are the new earbuds? Let’s check ’em out.

The first thing you notice about the AZ60 is how much smaller they are than the AZ70. I’m not sure how that’s possible given that they still weigh the same (7 grams per earbud), and yet have better battery life and one more mic per earbud (eight in total). In any case, well done, Technics. They no longer protrude from your ears, and when you sit them side by side with other earbuds in the $200 to $300 range, like Sony’s WF-1000XM4 or Jabra’s Elite 85t, the AZ60 are actually a little smaller.

The charging case is also way smaller. Not AirPods Pro small, but very sleek and very pocketable. What hasn’t changed is the styling. Whether you get the black or the silver version, the AZ60 are sleekly designed with polished and brushed accents that look very high-end — the perfect antidote to Apple’s ubiquitous white plastic buds. With IPX4 protection, they’ll even make your daily workout an upscale event.

It may seem obvious, but smaller earbuds generally offer a more comfortable fit. But not always. Sometimes a weird shape can cause pressure and sometimes the box doesn’t include enough eartip sizes for your specific ear shape. Thankfully, the AZ60 don’t suffer from either problem.

Their rounded contours completely fill my ears’ conchas, but do so without causing discomfort. And with seven sizes of silicone eartips to choose from, most folks should be able to find something that works for them. After several hours of use, my ears definitely needed a break, but at no time was I ever bothered by these buds.

Quiet as quiet can be

We noted that the AZ70 had awesome active noise cancellation (ANC), and the AZ60 are just as impressive. The current gold standard are the Bose QuietComfort Earbuds, but the AZ60 are so good I can barely tell these two products apart. This is true for both consistent, droning sounds like the bathroom fan that sits eight feet from my home office desk, as well as inconsistent noises like traffic or conversations. They say that silence is golden. Well, if silence is what you seek, the AZ60 are worth their weight in gold, and then some.

These earbuds also have a transparency mode, and you can easily toggle between it and ANC with a long press on the right earbud. It’s not quite as magically clear as the AirPods Pro, but it lets in plenty of sound — more than enough for increased situational awareness. There’s also a setting in the Technics Audio Connect app that can tune the transparency mode to enhance just voices to make it easier to have a conversation with others.

The AZ60 preserve Technics’ high-energy sound signature, with incredible clarity in the mids and highs. It’s the kind of precision that lets you hear details in your favorite tracks that lesser earbuds or headphones typically mask. In the opening bars of Sia’s Saved My Life, which feature notes played on a piano, you can actually make out the sound of the damper pads as they lift and drop onto the piano strings. Listening to the Cowboy Junkies’ Sweet Jane from their Trinity Session album, you can hear the faint echo of the drums from within the recording space. That precision makes for excellent stereo imaging and a soundstage that begs you to try to reach out and touch the instruments.

Bass response is tightly controlled — always there when it’s needed, but never overwhelming. It’s a touch too controlled for my liking, but purists looking for balanced or neutral sound would probably disagree. The Audio Connect app gives you several options for modifying EQ with four presets and one that can be customized by you via a five-band set of sliders. For me, the unadulterated factory tuning was the most satisfying. The Dynamic preset adds a generous helping of emphasis across the spectrum, but it overcooks the high frequencies, making cymbals and other sibilance-prone sounds too sharp.

It’s also worth noting that the AZ60 are one of the few wireless earbuds you can buy that support Sony’s LDAC Bluetooth codec, which in theory should allow wireless hi-res audio when you pair them to an LDAC-capable phone (Android models only right now as Apple does not support LDAC). As a test, I swapped back and forth between an iPhone 11 (AAC codec) and a Pixel 5 (LDAC) using a variety of lossless audio tracks from Tidal HiFi. There is indeed a difference, but it’s incredibly subtle. LDAC produces a smoother sound signature that takes the edge off some of the higher frequencies. There’s a little more detail, too, but you’ll have to pay extremely close attention to hear it.

But regardless of whether you use LDAC or not, the AZ60 deliver incredible sound quality. In head-to-head comparisons with Sony’s $280 WF-1000XM4, Master & Dynamic’s $299 MW08, KEF’s $230 Mu3, and Grado’s $259 GT220 — all top-notch audio performers — the AZ60 hold their own, which, when you consider their price and other features, makes them an extraordinary value.

The AZ60 lack Google Fast Pair or Apple’s one-tap pairing, but that’s no big deal. Simply pulling the buds out of their case for the first time sends them into pairing mode, and from there you just select them from your device’s Bluetooth menu. Once paired, the connection is reliably strong and consistent. I found I was able to get up to 50 feet away from my phone when outdoors, but sometimes as little as 20 feet when inside, walking between floors.

But what I really like about the AZ60 is their ability to do multipoint Bluetooth connections — a rarity among true wireless earbuds. This lets you connect the buds to your phone and, say, your PC simultaneously. You can stream music from your computer, then if your phone rings, just stop the music and answer the call — the AZ60 switch seamlessly, with only a split-second wobble in the audio. If you multitask between devices (and these days, who doesn’t?), it’s a super-handy feature.

Speaking of taking calls, the AZ60 are very good for phone calls. But take note of the settings in the Audio Connect app. It offers an option for increased background noise reduction, and I found this can significantly reduce the clarity of your voice under some circumstances — which is the opposite of the intended effect. Using the regular settings is probably all you need.

The earbuds are equipped with something Technics calls “JustMyVoice” — a fourth mic used for detecting speech — which the company claims can isolate and amplify words and minimize surrounding noise. It seems to work, but I’d argue that Jabra’s Elite 7 Pro are still better for calls in loud environments.

The AZ60 will let you activate your phone’s built-in voice assistant, but if you’re an Amazon Alexa fan, you can choose to use Amazon’s A.I. instead. The benefit of doing that is hands-free wake word access — just say, “Alexa, …” followed by any of the usual commands you might need, including phone functions like volume (“Alexa, volume, 50%”) or playback (“Alexa, [play/pause]”). Though this is slowly becoming a more common feature, we’ve only seen it on a handful of earbuds like the Sony WF-1000XM4, JBL Tour Pro+, and of course, Amazon’s own Echo Buds.

While I’m not a huge fan of touch controls, Technics has done a really good job with the touch sensors on the AZ60. They’re responsive, easy to tap accurately, and they provide a small tone for each successful tap. The Audio Connect app lets you tweak each gesture to do any of the available activities (play/pause, track skip, volume up/down, ANC/transparency, voice assistant, call answer/end, and microphone mute). I’ve only ever seen this level of customization on the Jabra Elite series and it’s a fantastic inclusion on Technics’ part. Technics also throws in a Find My earbuds option that will track your buds’ last known whereabouts and let you turn on a chime sound so you can find them.

The only thing missing are in-ear sensors for automatically pausing/resuming music playback when you remove or reinsert the earbuds.

The only thing that is average about the AZ60 is its battery life. You’ll get about seven hours per charge (give or take 30 minutes if you’re using ANC or not) and the charging case can extend that to between 24 to 25 hours of total play time. That’s not exceptional, nor is it unacceptable — most folks will find it perfectly sufficient for a full day of use.

There’s a fast-charge option, but it’s not especially noteworthy: 15 minutes will buy you an extra 70 or 80 minutes of use.

As with any earbuds or headphones that enable the LDAC codec, if you use this feature, it will drain the battery much faster, bringing a single charge of the earbuds down to 4.5 hours of use if you turn on ANC, too.

This brings us to the only other feature that Technics has omitted: Wireless charging for the case.

Superb sound, awesome ANC, a comfy and secure fit,  hi-res LDAC support, and tons of features — all at a price that beats most of the competition. Yup, we’re big fans of the Technics EAH-AZ60 and we think you will be too.

There are only two other products that you should consider before buying the Technics EAH-AZ60:

$280 Sony WF-1000XM4: This is the upgrade pick. It offers everything that the AZ60 can do, plus wireless charging, your choice of Alexa or Google Assistant, and in-ear sensors that can automatically pause music for speech or when you remove an earbud. But the earbuds are bigger and less comfortable, especially for folks with smaller ears.

$200 Jabra Elite 7 Pro: These earbuds don’t have the AZ60’s exceptional sound quality (though in fairness they still sound really good) or hands-free Alexa, but they cost less, they’re smaller and more comfortable, plus they’re fully waterproof and have in-ear sensors and wireless charging.

Always hard to answer this question, but with an IPX4 rating and what seems like very good build quality, they should last for many years of use. Panasonic backs Technics true wireless earbuds with a one-year warranty.

Absolutely. They’re one of the best sets of true wireless earbuds we’ve ever tested.

Topics
Best Amazon Echo Deals for January: Get an Echo Show for $45
The best wireless headphones for 2023: which should you buy?
The best noise-canceling headphones for 2023: Sony, Apple, and more
The best kids headphones of 2023: for fun, safety, and more
This massive OLED TV has a $1,000 price cut at Best Buy today
I replaced my kitchen TV with an Echo Show 15 — and I kinda liked it
The best HDMI cables you can buy in 2023
The best speakers for 2023: great hi-fi options for music and more
The best Blu-ray players for 2023
Why the Nest Hub Max still rocks as a kitchen TV
Stream live sports without cable with Sling — now 50% off
OnePlus Buds Pro 2 to support Android’s new spatial audio feature
Should you mount your TV above a fireplace?