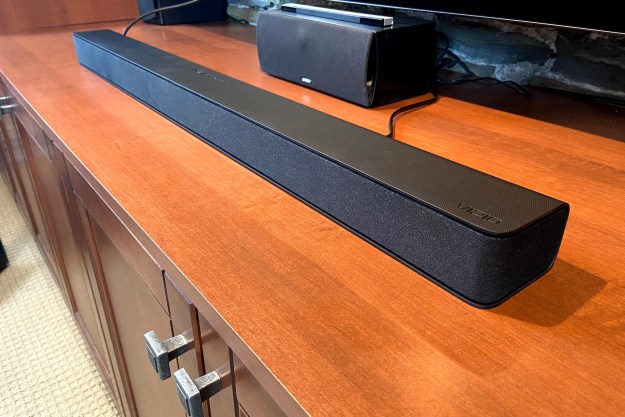 “The V-Series 2.1 gives your TV a fun and affordable home theater upgrade.”

If you check out our previous Vizio soundbar reviews, you’ll find a common thread: Value. Whether it’s a 5.1.4 Dolby Atmos model or a 2.1 system, or something in-between, Vizio keeps delivering soundbars that punch well above their price.

What can you expect from this ultra-affordable TV speaker? Let’s take a look.

Vizio’s reputation for value goes beyond the physical capabilities of its products. Inside the box, you’ll find literally everything you need to set up the V21. In addition to the soundbar and wireless subwoofer, you get four connection cables: An HDMI cable and an optical cable for digital sound. There’s a dual analog miniplug cable for connecting a headphone jack-based music source (or a smart speaker), a stereo RCA patch cord for connecting other analog devices, and even a set of wall mount brackets.

A quick start guide, full user manual, remote control, and a paper template for wall mount brackets round out the picture. You’ll have to discard the styrofoam bumpers if they can’t be recycled locally, but the cardboard box shouldn’t be an issue.

Vizio used to adorn its soundbars with silver-toned caps at either end. It gave the speakers a touch of sophistication, but they also drew attention to themselves. I tend to think that soundbars should be as discrete as possible — unless they are attempting to be conversation pieces — and Vizio’s handsome new all-matte-black design language is a big step in the right direction.

Instead of end caps, the soundbar’s fabric grille wraps around the edges creating seamless front corners that remind me of the Sonos Beam. A set of four discrete physical buttons sit atop the textured plastic surface. Around the back, you’ll find a plethora of ports: HDMI ARC, optical, USB (for hard-drive-based music), an auxiliary analog input, and a dedicated analog input for smart speakers.

For less than $200 the V21 will give any TV a giant lift in sound quality.

At 36 inches wide and 2.25 inches tall, it’s perfectly proportioned for TV screen sizes of 48 inches or larger. It’s short enough that it probably won’t obscure the bottom of the screen unless your TV has very small legs.

A bigger change is the subwoofer. Vizio used to include a slimline wireless subwoofer that could fit under a couch, but the V21 ships with a more traditional down-firing cube. While not quite as versatile in terms of placement, it’s still one of the smallest subs you can find.

Setting up the V21 is a snap. Connect the soundbar to your TV via your pick of digital or analog cables, plug the soundbar and sub into power, and you’re done. We were surprised that the V21’s predecessor, the horribly named SB3621n-G8, didn’t come with HDMI ARC as a connection option, but the V21 fixes that omission.

Not that it’s actually needed — HDMI ARC is most useful on soundbars that support advanced audio formats like DTS:X and Dolby Atmos, which can’t be transmitted over optical connections. The V21 doesn’t support them, so from an audio point of view, there’s no benefit to using HDMI.

Using HDMI ARC lets your TV remote control the V21’s volume and mute, but even this can be accomplished with an optical connection if you train the soundbar to recognize your TV’s remote IR signals.

My advice: Use the optical connection. Why give up a precious HDMI port on your TV when there’s no real benefit to doing so, and the V21 doesn’t have an HDMI input to compensate for the port it requires on your TV?

The V21 has a USB port for song playback from a hard drive or USB memory stick. It only recognizes WAV and MP3 files.

If you want to listen to music from a non-TV source, your best bet is Bluetooth. Pairing your phone to the soundbar is as easy as switching the input to Bluetooth and looking for the V21 in your available Bluetooth devices list. A Wi-Fi connection would offer higher quality audio, but if you’re simply looking to power a party with a Spotify playlist, Bluetooth is more than sufficient.

Unfortunately, Bluetooth stability is a bit hit and miss. Over the course of several days, I had some sessions that were rock-solid, while others suffered from frequent dropouts. Breaking and then re-establishing the Bluetooth connection sometimes fixed it, but not every time.

Vizio sent us the V21-H8 model to review. The included remote control is well designed, with a comfortable feel and nice, clicky buttons, but it’s not backlit, and there’s no built-in screen so you can easily see the different modes and levels displayed.

Strangely, the V21-H8R — which Vizio lists on its website for the same price as the H8 — comes with the upgraded display remote. If you have the choice, get the H8R.

If you get the H8, you’ll need to learn to decipher the morse-code like LED dots on the left side of the soundbar which give you visual feedback after every click. With the exception of volume level, which is fairly intuitive, many of the other indicators require a legend to decipher. Some time spent with the manual will go a long way in avoiding frustration, especially with deeper settings like DTS Virtual:X.

To be fair, Vizio has made an effort to demystify some of the LED meanings: A helpful voice tells you which input or EQ mode you’ve just switched to, and lets you know when you’ve successfully activated Bluetooth pairing. It could become a nuisance over time, so thankfully a long-press on the mute button will disable it.

Fire up your favorite movie and you’ll instantly hear what your TV’s built-in speakers have been keeping from you.

The V21 includes a dedicated port for plugging in a smart speaker like an Amazon Echo Dot (or you can pair it via Bluetooth). Either way, the V21 is designed to automatically lower the volume level of your movie, TV show, or music so that you can hear Alexa (or Google Assistant) respond to your voice commands. If the response is 10 seconds or shorter, the background audio will dip, but if your assistant keeps speaking, the V21 will mute the show or movie completely until the response is finished. Not only is this a handy feature for dealing with the problem of not being able to hear your assistant, but it’s also a super-easy way to stream music services to the soundbar without needing to use your phone.

For its price, the V21 sounds amazing. You get excellent stereo separation and that tiny 5-inch wireless subwoofer kicks out a surprising amount of low-end boom that gives the entire system that movie theater feel.

Fire up your favorite Marvel, DC, or Star Wars movie and you’ll instantly hear what your TV’s built-in speakers have been keeping from you.

As you might expect, it can’t possibly compete with more expensive soundbars — there’s a distinct lack of detail through the midrange, for instance — but for less than $200 the V21 will give any TV a giant lift in sound quality, which is exactly the point.

Like it loud? There’s more than enough power on tap to wake up everyone in your house if that’s how you roll.

The DTS Virtual:X feature doesn’t live up to its billing as a way of producing overhead sounds, like the kind you’d get from dedicated up-firing height speakers, but it does significantly increase the sense of width and depth. I recommend keeping it turned on for any listening where you can sit front and center.

What I really appreciate about Vizio’s approach to its soundbars — even its cheapest ones — is that you get a huge amount of control over things like bass, treble, and even the subwoofer level. I’ve tried out $1,000 soundbars that don’t give you this kind of ability to tweak EQ.

Speaking of EQ, the EQ presets (movie, music, dialogue, and game) are excellent shortcuts for adapting the V21’s sound signature. Though once again, you’ll have to contend with the deep male voice announcing the mode changes.  Dialogue mode is especially impressive given that there’s no center channel — the usual nexus for speech enhancement.

Like it loud? There’s more than enough power on tap to wake up everyone in your house if that’s how you roll.

Listening to music on the V21 is also enjoyable, but this is where you’ll likely notice the soundbar’s limitations. Despite the fact that the left and right front channels do a good job with the stereo separation, music still tends to feel boxed in. Vocals and higher frequencies are impressively clear, but there’s a vaguely hollow feeling that I attribute to that same midrange weakness I described above.

Don’t let this stop you: To get much better music fidelity, you’re looking at spending more than double the price, for a soundbar like the Bose Smart Soundbar 300, which does not come with a subwoofer.

Vizio does it again. The V-Series V21 soundbar is an awesome and affordable sound upgrade for any TV.

For a 2-channel soundbar with a wireless sub, the V21 is in a class by itself, especially when you consider its price. But, I’d be remiss if I didn’t point out that for only $70 more, you can buy the step-up Vizio V-Series V51, which adds a center channel and two surround speakers for a full 5.1 sound system.

The Vizio V-Series V21 comes with a one-year warranty, but I suspect you will get many, many years of use. Speakers are among the most reliable tech products, and Vizio has a reputation for making products that last.

Yes. The price alone makes the V21 a no-brainer, but its sound quality and extra features mean you get a whole lotta bang for the buck.

Topics
The best speakers for 2023: great hi-fi options for music and more
The best soundbars 2023: which should you buy?
The best wireless headphones for 2023: which should you buy?
The best noise-canceling headphones for 2023: Sony, Apple, and more
Super Bowl 2023 halftime show: who’s performing?
The best indoor TV antennas for 2023
The best waterproof Bluetooth speakers for 2023
The best VPN for streaming for 2023
Marshall’s latest Bluetooth speaker has four drivers for 360 sound
Showtime is being merged into Paramount+
Sling is now 50% off — stream live sports without cable
Klipsch follows the success of The Fives with The Sevens and Nines powered speakers
Everything leaving Hulu in February 2023