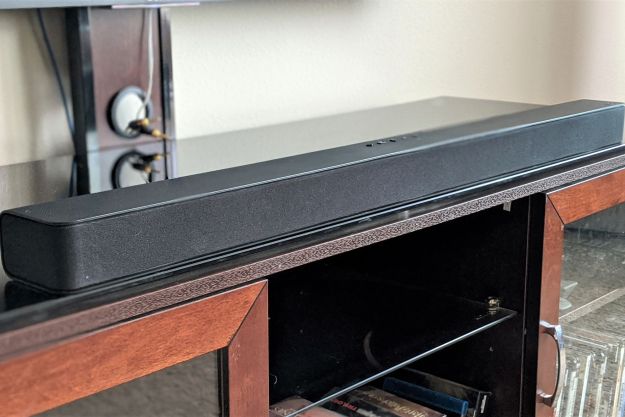 For more than a decade now, Vizio’s stance when it comes to soundbars has consistently been about providing oodles of value without breaking the bank. If you were in the market to upgrade the sound of your television without making a huge investment, Vizio was often the best place to look.

Well, despite all of us living in the upside-down world that is the year 2020, at least that one thing has not changed. Vizio’s new $250 V-Series V51-H6 5.1 soundbar system is a bargain surround sound setup — even if it did take a few too many cost-saving measures this time around.

I will always be fond of how easy Vizio makes it to set up soundbars. I was in no rush as I connected it up for testing, but if I were racing a clock, I’d bet I could go from unboxing to listening to music within a span of 10 minutes.

The system includes the bar itself, a pair of surround sound speakers, and a wireless subwoofer. Admittedly, there’s not a ton here to slow you down. But it really is just a matter of plugging your bar and subwoofer into power, making a physical connection between the bar and your display, running the included speaker wire from the surround sound speakers to the subwoofer, and powering everything up.

From there, the bar will automatically search for a content-producing input. Be ready to act quickly and connect your phone via Bluetooth or stream something on your TV, because the Vizio voice prompt does get old after the first few times it announces that it’s searching for an input.

Beyond that minor annoyance, that’s it. There’s no Wi-Fi to configure with this bar – something we’ll touch more on later – and there aren’t any other setup hoops to jump through. It’s probably as close to plug-and-play as a soundbar system can get.

Vizio says it took a low-profile approach to this year’s new budget system, which may be a bit of an understatement. The bar itself isn’t incredibly different from recent soundbars that have sat on my media stand: At 36 inches long, it’s just two inches shorter than the Sony HT-G700 that sat there before it.

The rear speakers and subwoofer, though, are petite. The sub enclosure houses a 5-inch woofer, and the speakers are easily dwarfed by some older Vizio rears I dug up for comparison. The size honestly made me worried that Vizio had possibly gone too compact (are we making a home theater for ants?) and sacrificed sound in the process. But, as we’ll get to, the system packs a punch for its size.

There are three drivers in the bar, one for each of the front left, center, and right channels in a 5.1 system. Head to the rear of the soundbar, and you are met with several connections. There’s a retro 3.5mm stereo audio input (the good ol’ red and white inputs), as well as an optical port, an HDMI ARC port, a 3.5mm auxiliary input, and a USB port that Vizio says will only support WAV and MP3 formats.

Would I have liked to see Vizio drop the old-school stereo audio inputs in exchange for another HDMI port? Yes. Is this a fairly solid lineup of connections for the price, regardless? Also, yes. Just be advised that certain connections will limit your sound format options. The stereo inputs, for example, will only produce two-channel sound.

The standard Vizio soundbar remote gets a refresh, too, adopting a slightly more rounded, gentle approach than its more brick-like older relative. The new remote seems more functional as well, with buttons for EQ, Setup, Level, and Effect all available to help you toy with sound settings. I was never a huge fan of those old Vizio remotes, and it seems like Vizio is moving in the right direction here with something that reminds me of my Nvidia Shield clicker.

There are a few legitimate features built into this bar, but a few things that are “technically” features are oddly overdressed by Vizio marketing to be far more important than they actually are.

Your options for streaming music are Bluetooth — and only Bluetooth. And that’s just fine. The connection was solid, and the sound was good. But with all the strides Bluetooth technology is making, Wi-Fi is still the king for streaming audio, and bars like the Yamaha YAS-209 have proven it is possible to have that kind of feature in a budget bar.

The V-Series bar does have a useful feature called Front Surround Mode for those setups where putting surround speakers at the back of the room just isn’t possible. This workaround involves putting the rear speakers on either side of the soundbar and moving the subwoofer to the front of the room, then accessing Front Surround Mode via your remote. Vizio says the bar will utilize DTS Virtual:X to create virtual surround sound in this configuration. The result is passable, but there’s a reason it describes having speakers at the rear of the room as the “ideal setup.”

Then there are things like Dual Stereo Mode – an example of what we described as “technically” a feature – which sends the same audio to all five speakers. This feature works, to be clear, I’m just not sure when this would be needed or wanted. Movie watching is generally best with regular surround, where the front left, center, and right handle dialogue and action and the rears take care of background noise. And music listening is literally designed for stereo left and right sound. Vizio did note that this mode is catered towards parties, where there isn’t a singular ideal seating position to listen from, but I would make the argument that standard stereo mode will sound better in that setting as well.

To be fair to Vizio, there is a function that allows the voice assistant to be active on the bar even when the soundbar is playing audio from a different input, and the bar will auto-mute other sources so the assistant can be heard. It also does the same thing when you have a phone that’s connected through Bluetooth — unfortunately, you can accidentally get TikTok videos blaring over your movie audio.

A few hundred words ago, I teased how enamored I was about such small products like the Vizio sub and rear speakers creating such significant sound — and there is a lot of truth to that. For a solid week, I’ve been throwing different content at it — from all kinds of music to various Netflix documentaries and TV shows, plus the occasional Marvel movie and a watch (or two) of Hamilton — and I can confidently say that most folks who buy this bar will be completely content with this type and quality of surround sound.

It has all the basic elements that make for a good surround setup. The front stage effectively captures action scenes, the rear speakers add adequate immersion, and the sub, while only rated down to 50 Hz, has rumbled enough to elicit a random bark from my previously deeply asleep dog. I was pleasantly surprised with music listening too, as the Vizio bar produced a generally warm sound that was balanced enough to be enjoyable.

Overall, it’s the sound you should expect from a $250 package. But this bar is certainly not without its quirks. Chief among them, from my experience, is the seemingly lackluster center channel. When watching vocally dominant content, like Netflix’s comedy series The Degenerates or the Down to Earth docuseries, it wasn’t much of an issue. But when switching to action sequences in Guardians of the Galaxy, or the busier parts of Hamilton, the dialogue just couldn’t keep up with everything else that was happening in the scene.

You can turn both the center channel and dialogue up specifically through the Vizio remote, and that does help to a degree. But it is clear that with some content, the center is simply outmatched compared to the rest of the sound generated by the system. Furthermore, I wasn’t a huge fan of the different EQ presets — which includes the Movie and Music options that you can toggle between with the remote — as they seemingly bloated the audio. Essentially, those EQ settings cranked all the frequencies up, which makes the action a little more boomy, but a lot less refined. Listening in the Direct Mode was preferable to me.

DTS Virtual:X is available in this soundbar, too. DTS Virtual:X is post-processing that’s supposed to be able to add virtualized 3D sound to any audio that’s being sent the soundbar’s way. It’s also supposed to work with nearly any configuration of speakers, and while I did experience a more immersive experience with it turned on, it wasn’t something my significant other could notice without me pointing it out. This result makes sense because with everything virtual technologies can promise they’ll create in terms of audio, you can only do so much with just three front-firing drivers.

In addition to being able to change the levels of the dialogue and center, you can also adjust the bass, treble, subwoofer, surround level, and surround balance. While this sound may have its faults, it was a smart move by Vizio to make the bar’s audio sufficiently customizable to please the palates of most people.

Vizio’s new 5.1 soundbar system may not be the best way to add surround sound to your setup – that happens to be a traditional home theater, by the way – but it is once again one of the most crowd-pleasing. With the decent features and good sound that it tosses into the mix, the V-Series is a value for the masses.

Truthfully, it’s hard to find another bar in this price range that offers a full 5.1 system with a subwoofer and rear speakers. The Yamaha YAS-209 is still our favorite bar for its versatility, features, and sound, but it doesn’t feature surround speakers and currently costs a bit more at $300. I do prefer the sound of the Sony HT-G700, though I don’t prefer it’s nearly $600 price tag.

Not only are they inexpensive, but Vizio soundbars seem to have a knack for longevity. They carry a pretty standard one-year warranty, but the Vizio system I bought for my parents eight years ago is still kicking to this day. I can’t guarantee this bar will have the same shelf life, but it should stick around for a while.

Yes. You really can’t get true 5.1 sound at this price anywhere else. Even if you do have to fine-tune the audio and grapple with the lack of meaningful features, the Vizio V-Series 5.1 soundbar is undoubtedly a great deal.

Topics
CES 2023: Audio-Technica adds a mic to its iconic M50x headphones to target creators
Best Walmart TV deals for January 2023: From $278 and up
LG’s 2023 soundbars go wireless, get on-screen controls, and game-friendly inputs
What is aptX? Cutting through the clutter of Qualcomm’s codecs
The best home theater projectors you can buy in 2023
LG’s latest portable CineBeam Projector now available for $600
The best gaming speakers for 2023
The 50 best movies on Netflix right now (January 2023)
This massive OLED TV has a $1,000 price cut at Best Buy today
The best movies on Amazon Prime Video (January 2023)
The best new shows to stream on Netflix, Hulu, HBO, and more
The best TV shows on Amazon Prime right now
Best new movies to stream on Netflix, Hulu, Prime Video, HBO, and more