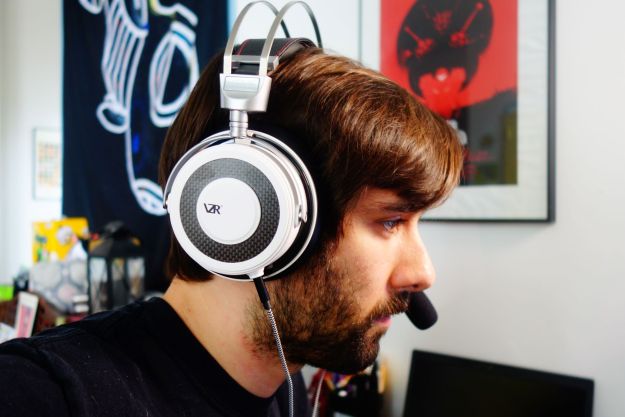 VZR Model One review: Get the most out of 3D audio
MSRP $349.00
Score Details
DT Editors' Choice

The VZR Model One isn’t your average gaming headset. You won’t find any flashing RGB lights on it. It doesn’t have a known gaming brand like Razer or HyperX attached to it. And you likely won’t see your favorite streamers prominently (and suspiciously) wearing them while playing games. The priority here is audio quality, not fashion.

Contents
Introducing the VZR Model One

The self-proclaimed “audiophile headset” comes from an impressive pedigree. It was designed by former Apple lead acoustics engineer Vic Tiscarareno alongside video game audio veterans. The Model One’s big innovation is its patented CrossWave technology, which optimizes it for 3D audio. With consoles like the PlayStation 5 using sound as a selling point, the Model One is in a position to be the perfect next-gen headset.

The VZR Model One is an excellent gaming-focused headset that delivers superior audio quality and surprising comfort. Its high price point might put it out of many players’ budgets, but this is a key example of “you get what you pay for” in motion.

The Model One’s primary selling point is its audio quality. It’s a closed-back headset that comes with 40mm drivers. For those who want a gaming headset that’s built with spatial audio in mind, VZR has a strong selling point.

The basic sound quality lives up to the “audiophile” label. When I swapped between the Model One and the Roccat ELO I had on hand (my go-to gaming headset), the difference was immediately clear. It provides a wider audio landscape that better balances booming bass and sharp treble. When listening to music with it, the bass is forceful, but it never overpowers the higher frequencies. It’s always a tricky balance to strike, but VZR has done an admirable job here.

I can’t deny that I’ve gotten the most out of next-gen sound while wearing the Model One.

The main attraction here is VZR’s patented CrossWave technology. To put it in layman’s terms, the Model One uses an acoustic lens that’s built to better shape directionality. VZR notes that the tech allows the headset to guide sound in a way that more closely mirrors how we hear it in real life.

That’s immediately apparent when playing a PS5 game. As part of my tests, I jumped into Returnal, which features a detailed alien soundscape. Even after playing 20 hours of the game previously, I was blown away by what I was hearing. Rain fanned out in every direction and I could hear drops, close and far, hitting the ground in every direction. When I trampled over alien eggs, I could hear them squishing under my feet as if the sound was coming directly below me. I had similar results in Resident Evil Village’s Maiden demo (which is a 3D audio tour de force), as detailed sound actively made for a more terrifying, immersive experience.

Sony notes that the 3D audio effect works the same on any headset that supports it, but I was skeptical of that claim after using the Model One. Even if the CrossWave technology was a bit of “Blast Processing” marketing shine (and I don’t believe it is), I can’t deny that I’ve gotten the most out of next-gen sound while wearing the Model One. The high audio quality makes every little sound pop and I felt a full spatial listening experience.

When I first looked at the Model One, I was anticipating an uncomfortable experience. They weigh in at 430 grams with a hard, metal skeleton around the headband and ears. That design certainly signaled that these are probably built to last, but I was skeptical about how it’d feel wearing them for hours on end.

I expected a trade-off between comfort and quality here, but I’m impressed that the Model One is able to deliver both.

To my surprise, the Model One delivers a surprising level of comfort. That’s thanks in large part to the headset’s memory foam earpads. With how thick they are, my ears barely brush up against the hard plastic underneath. The earpads are soft compared to gaming headsets I’ve used previously, making it easy to keep them on for hours at a time.

The headband ups the comfort factor as well. It’s not rigid thanks to a divot right in the center, allowing it to flex. The headband appears to be padded with the same memory foam that’s used in the earpads, making it rest easy on the scalp.

I expected a trade-off between comfort and quality here, but I’m impressed that the Model One is able to deliver both. The only downside is that the size can make them a pain to lug around. They come in a massive square case that’s bigger than a childhood lunchbox. They may not be the most portable option, but that shouldn’t be much of a problem if your intention is to grab a set of cans that take advantage of home consoles better.

The last piece of the package is the Model One’s detachable microphone. While it’s not looking to reinvent anything in the way the drivers are, it’s still a bit unique. It has a patent-pending design that’s built with passive noise cancellation in mind.

It’s harder to say how much of an effect that design tweak has, but the microphone certainly gets the job done. In testing it on PS5, I found that my voice was coming through clearly without cutting out. Recording some tests with it hooked up to my iPhone, I did notice that I needed to have the microphone closer to my mouth than I’d like. It picked up my voice well enough at mid-range, but I could certainly hear the distance. Discord friends noted the same thing when we played a few rounds of Pokemon Unite.

When not using the boom attachment, the headset defaults to an inline microphone, which is a nice touch. The quality naturally suffers here, but it’s a nice bit of flexibility. The headset features a mute toggle as well, though no volume control. It’s a bit of a surprising omission considering how robust the package is — and the price point.

For casual players, the Model One’s price will certainly be tough to swallow.

That last part is important. The VZR Model One will cost you $349, which is certainly an investment. For comparison, Sony’s own Pulse 3D headset, which is “optimized” for the PS5, costs $100. For casual players, the Model One’s price will certainly be tough to swallow. But for those who want the best sound imaginable, it certainly lives up to the audiophile label.

The Model One offer tremendous sound quality that really gets the most out of next-gen spatial sound. VZR has burst onto the headset scene with an impressive set of cans that balances comfort and quality. The $349 price tag is notably high for the gaming space and that’s admittedly going to be a block for many players. Fortunately, Model One justify the price for those willing to take the plunge.

If you just want a headset that’s better optimized for next-gen consoles, the Pulse 3D is a cheaper PS5 companion.

With a metal frame and a sturdy design, the VZR Model One is certainly built to last. Don’t expect them to fall apart in a year.

Yes. If you have the cash to burn and really care about sound quality, they’ll certainly fill your audiophile needs.

Topics
HDMI ARC and eARC: the one-cable solution for TV audio, fully explained
Audio-Technica’s $2,700 wooden wireless headphones do something no other headphones can do
The Sound Burger is back. Audio-Technica revives its vinyl Walkman for a new generation
The best noise-canceling earbuds for 2022
The best British TV shows on Netflix
The most underrated movies on Netflix
The best fantasy movies on Amazon Prime Video
Best headphone deals: Save on Beats, Bose, and Sony
The best action movies on Hulu right now
Android 13 is now available for Android TV
The 67 best movies on Amazon Prime Video (December 2022)
The most innovative headphones of 2022
The most innovative streaming devices of 2022