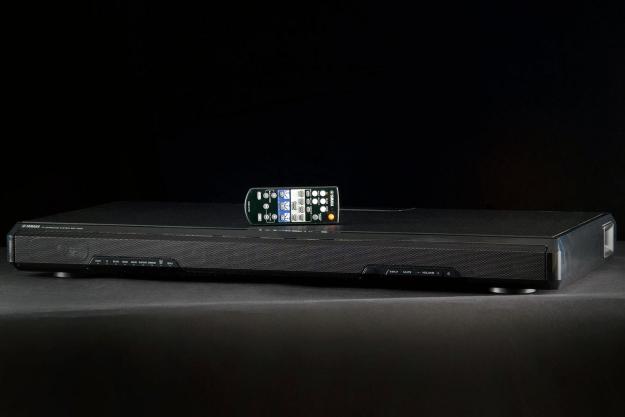 “You won’t find a sound platform with more convincing virtual surround sound, provided you can get it to work in your room at all.”

Utilizing a specialized array of small speakers designed to bounce sound off walls, Yamaha’s Sound Projector technology aims to create a more immersive virtual surround sound environment than many traditional setups. Increasingly a staple in Yamaha’s sound bar designs, it comes as little surprise that this Sound Projector approach is being employed in the company’s first entry into the pervasive new sound platform genre, the Yamaha SRT-1000.

Yamaha’s first go at the sound platform distinguishes itself from increasingly thick competition by employing a generous lineup of 12 individual drivers supported with plenty of power. The company promises big sound that reaches well beyond its physical boundaries, but, at $500, the system pushes budget boundaries as well, priced well above most of its competitors. While that might make it a tough sell, the SRT-1000 puts up a compelling argument to think big when you’re trying to go small.

Right out of the box, it’s clear that Yamaha didn’t cut corners with the SRT-1000, which boasts a hefty MDF enclosure that feels as solid as an oak. The platform takes up more real estate on a TV cabinet than competing sound platforms like Sony’s XT1, or Vizio’s S2121w-D0, but depending on the size of your TV, more space can be a good thing here. The prolific driver array takes up most of the front face, flanked at the sides by twin bass ports. At the back, a removable guard protects an input panel carved into a small cubby.

Riding along with the platform is a booklet of start-up instructions, an optical cable, and the same stubby remote you’ll find accompanying most of Yamaha’s mid-level sound bars.

While most sound platforms tend to blend together into a haze of black boxes, the 8-pack of 1-inch “beam” drivers lining the front side of Yamaha’s new toy beckons you to take a closer look. On each side of the center array sits a 1.5 x 4-inch midrange driver, and tucked underneath are dual 3.25-inch down-firing subwoofers that are well elevated to keep the unit from buzzing your TV stand.

As effects trailed down from the sparkling upper register, some cloud cover moved in.

An ample selection of input/output ports include three digital inputs — two optical and one coaxial — an RCA analog input, and a subwoofer output. As expected, Bluetooth connection for wireless streaming from a smartphone or tablet is also included. Notably missing is HDMI support. While it’s not something we’d typically expect from a sound platform, the fact that Sony’s $300 XT1 comes HDMI-equipped had us hoping Yamaha’s more expensive unit might too. The omission puts some limits on the system, which we’ll discuss in the setup section below.

The bottom right of the platform hosts basic control keys for input, volume, and power, matched on the left by a row of tiny LEDs with labels like surround, DTS/Dolby, and each input. There’s no real digital display, however, which spells out our first gripe about the SRT-1000: the convoluted interface trades plain English for a coded configuration of lights, which only the manual can decrypt. The aforementioned lack of HDMI connection means there’s no chance of an onscreen menu through your TV, either.

The lack of a display is the same problem we encountered with Yamaha’s YSP-1400 sound bar, and turning towards the SRT-1000’s remote further reminded us that we’ve seen this movie before. Yamaha has employed the exact same suite of DSP and surround sound effects as the 1400, which includes surround modes like Movie, and Sports, as well as basic stereo. While most of the selections add digital effects, the system’s “TV Program” mode offers an unaltered surround sound signal.

Also built in are DSP effects like Clear Voice, designed to bring out dialog, Univolume, which balances out loud and quiet scenes, and Audio Delay for adjusting any digital latency. Control of the latter is the first of many options that require holding the button down on the remote for 3 seconds, which sets the front LEDs to indicate the amount of delay. The subwoofer control keys add or subtract delay, in this case.

If you’re sitting off center, you can also adjust the virtual surround sound angle, again, by holding down the position keys for 3 seconds, which then shows you’ve successfully adjusted the system with a flash of 3 LEDs at the center. It’s a workable solution once you get it down, but for 500 bones, we’d prefer a more intuitive means of control. We also wish there was a bit more EQ control, though the system does a good job of balancing most sources.

For the majority of setups, the best virtual surround sound experience can be obtained by connecting the SRT-1000 via Optical or Coaxial digital connection directly from your sources, including Blu-ray players, streaming set-top boxes, or game consoles. You may also want to go into your source devices’ settings and select a “bitstream” output, as we found the SRT-1000 sounded better when it did its own Dolby Digital and DTS decoding, versus accepting a PCM signal from a device. For TV audio, a direct connection from the TV works fine, but better sound can be had by not using the TV’s down-mixed version of whatever you are feeding it from source devices – hence the direct connection recommendation.

As mentioned, the SRT-1000 offers no HDMI connection, and therefore no HDMI ARC for seamless control with your TV remote. However, the unit can learn basic remote commands like volume and power from your TV remote, offering a relatively simple way to get seamless playback from the TV.

To begin our evaluation of the SRT-1000, we turned to another T-1000 — this one of the liquid metal sort, from James Cameron’s classic sci-fi epic Terminator 2, re-mastered on Blu-ray. And just like its namesake, the SRT-1000 proved itself to be a advancement in technology over DSP-based virtual surround sound platforms, justifying Yamaha’s decision to double down on sound projection.

For a one-box wonder, the SRT-1000 adds some impressive substance down low.

From the start, the SRT-1000 provided an expansive front image that spread out before us with both breadth and dimension, like a sonic hologram. As we made our way to the first big collision between the Terminator titans, not only was the sound more spacious than most sound platforms we’ve evaluated, but there was a perception of greater ambience as the system seemed to carve out depth and space between effects for a more immersive ride.

With that said, we noticed that the effects didn’t extend to the back and sides of the room as well they did when we first sat down with the system. Of course, in the time that elapsed between the first evaluation session all the next, the system and room were rearranged, as is common in our busy AV testing room. And therein lay the issue with sound projection: the level of immersion you get depends heavily on your room and the positioning of the system itself. Try as we might, we couldn’t get the SRT-1000 to pop off the back walls like it had when we were gathering our initial impressions. That’s why Yamaha’s upper-tier sound projectors employ a microphone and room optimization system, to keep the experience more consistent.

As for its overall sonic talents, the SRT-1000 is a brutish box, which can turn on a dime to handle more delicate moments. Heavier effects like the purr of Schwarzenegger’s Harley, or the explosion of the T-1000’s semi after it hits the viaduct were served with a pulpy punch, reaching deep into the upper bass — not as potent as you’ll get from a dedicated sub, but for a one-box wonder the SRT-1000 adds some impressive substance down low. On the other end, details in sparkling treble effects such as the click of steel as a gun is cocked, the tap of the T-1000’s boots on tile as he stalks his prey, or the jingling of the chain as the Terminator unveils Sarah Connor’s hidden gun stash rang out with clear definition.

The SRT-1000’s hefty MDF enclosure feels as solid as an oak.

The system had a bit of trouble in the middle of the sound, however. As effects trailed down from the sparkling upper register, some mild cloud cover moved in, rolling off some of the detail when it came to effects like gun shots, and the keener moments of dialog. The intro chase scene of Skyfall lost some gravity as Bond’s Walther PPK and his adversary’s machine gun both rang a little flat, as did the center percussion instruments of the sound track. The issue never made dialog incoherent, but Sony’s cheaper XT1 bested the SRT-1000’s midrange capability handily.

Music followed a similar sonic trend, with the midrange section coming off just a bit underwhelming and flat. Still, we wouldn’t kick the SRT-1000 out of bed as a wireless music streamer, as it offered a well-struck balance between the potent bass frequencies and the clean treble.

Yamaha clearly made some sacrifices to bring its Sound Projector technology to the SRT-1000, including a pedestrian interface, and a lack of features like HDMI, which show up in units that cost hundreds less. However, for those willing to pay a premium, the SRT-1000 delivers a powerful punch of expansive virtual surround sound from beneath your TV, offering an engaging cinematic experience that reaches beyond the box.