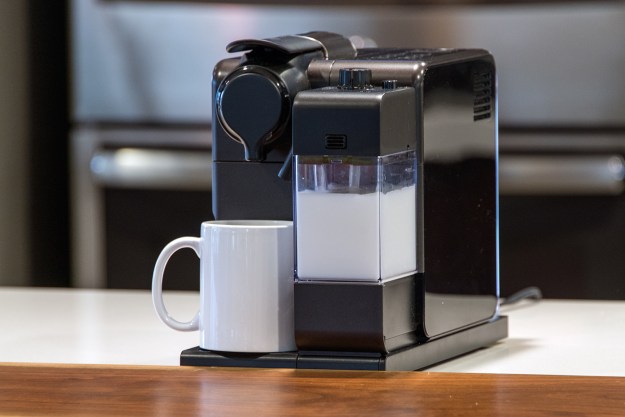 When you come across the $500 Nespresso Lattissima Touch placed alongside the other high-end espresso makers, you might find yourself wondering why it costs so much. It’s likely because it can also steam milk, so that you can make cappuccinos and latte macchiatos. While this machine is easy to use, it relies on capsules for coffee, making it feel more like something you’d see in a store offering free coffee. Die-hard java enthusiasts should probably keep on walking and pick a model where they can add grounds of their choice.

At 4.5 pounds, the Nespresso Lattisima Touch is fairly lightweight. That’s probably because the majority of the machine is made of heavy-duty plastic. The benefit is that every removable part can be cleaned in a dishwasher. Parts in other high-end espresso machines tend to require hand washing. It also makes it relatively easy to set up and break down when cleaning is required. While it may not sparkle like many of its aluminum and silver clad brethren, it does feel well made.

The machine measures 6.8 by 12.6 by 10.2 inches and looks like a box. It would easily fit in the corner of a kitchen counter, either flush against a wall or on a diagonal, without taking up too much space. At first glance, the Nespresso Lattisima doesn’t look like a particularly high-end machine. It lacks an instructional screen and features a power button and just six coffee cup icons on the top: three for coffee choices and three options for milk. When you initially turn on the machine, the cups light up, resembling a landing strip. Once they are no longer illuminated, it’s ready to brew a cup of Joe. Thankfully, this happens quickly.

The machine is fairly lightweight, probably because the majority of the machine is made of heavy-duty plastic.

There are two removable liquid containers on the Lattisima Touch: one for milk and one for water. We loved their design; the milk container has an adjustable arm so you can position it over various sized coffee cups and never make a mess. The lid of the water tank nestled on the back of the machine does double-duty as a handle and a cover. Simply lift the lid and gently pull up to remove the container. It seems like it wouldn’t be sturdy, but it is actually quite stable.

Since this is a capsule-only espresso system, you gotta wonder where they end up after use. Behind the cup-placement area, there’s a slide-out drawer that stores them. It can hold up to nine used capsules, and we found that to be the case in our tests.

Setting up the Nespresso Lattisima Touch is a breeze. We were able to get it up and running in about 10 minutes. You only need to refer to the manual to see how to dismember the top of the milk container. All the pieces snap out without issue. We mention this because you should wash all the parts before making your first cappuccino.

Included in the box are a manual, a welcome kit, sample coffee capsules, and a water hardness test strip. The welcome kit looks like a menu that you might find in business class, and that sums up our thoughts on the Lattisima Touch: It’s a step above but not quite first class. In the welcome kit, you’ll find a description of the different coffee flavors – a range of premium, flavored, and espresso blends. It seems as if every flavor ends with the letter “o.” There’s also information on where to order more capsules. If you opt to order them from the company, you automatically become a member of the Nespresso Club and will start receiving special offers and event invites. You can also get the capsules on Amazon (and other online outlets) or at a Nespresso Boutique. If you purchase them in bulk, capsules cost between 70 and 80 cents each.

Making an espresso (or any of the other five types of coffee) is pretty straightforward. Just place a cup under the spout, lift the capsule lever, place the capsule, press the button for the type of coffee you want, and pull down the lever. We should note we did occasionally have some issues with the capsules. First, they go in sideways – so if you’re used to a Keurig, you might be a bit thrown off. Second, they didn’t always pop correctly, so you end up with chemically tasting hot water instead of coffee.

The coffee buttons are programmable, but since it lacks a screen, it’s pretty unintuitive to set. You need to press and hold the coffee type for three seconds until it blinks. Then it’s in programming mode. Keep pressing the button until you get the amount you want. The good news is you can adjust the amount of coffee you get from a single capsule.

We did appreciate that the Nespresso Lattisima Touch did make a variety of coffee drinks. In our tests, we measured coffee temperature, how long it took to make, and overall taste. According to the National Coffee Association, coffee temperature should be maintained at 180 to 185 degrees Fahrenheit, though that still may too hot for some folks. While the majority of our tests yielded coffee in the 130 – 132 degree Fahrenheit range, it was still plenty hot – not burn your tongue hot, but enjoyable to drink. Here are our results:

We did manage to go through quite a few of the included coffee capsules. Overall, the flavor was acceptable, but not the quality you would get at a professional coffee shop. We did appreciate the variety of flavors included; however, the ones with added flavoring (vanilla or caramel, for example) did have that artificial taste. That said, if you enjoy non-dairy creamers, you might find it delightful.

This is one of the quieter machines we’ve tasted. In our tests, most drinks made produced a sound that was about 72 decibels, which is equivalent to the sound a shower emits. You probably won’t be waking anyone up if you want to make a cup of coffee.

Nespresso Variety Pack, 50 Capsules ($42)
So you can find your favorite flavor.

The Nespresso Lattissima Touch isn’t a bad espresso maker. It does get the job done and its ability to make steamed milk is definitely a bonus. If you want a no-fuss option, this is as easy as it gets. That said, it still seems a little spendy for what you get. This is especially true when compared to other home espresso machines that forego capsules in favor of coffee beans. True coffee aficionados may want to steer clear, but, then again, they’d probably never consider a machine that uses capsules.

Best Nespresso deals for May 2022