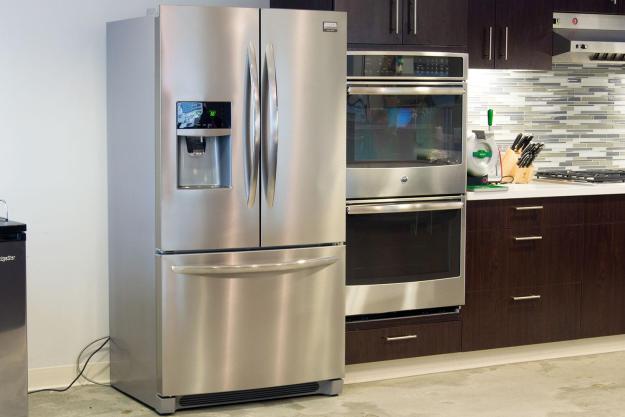 “Frigidaire's Gallery series refrigerator is a looker, but it's no jack-of-all-trades — rather a master of one.”

The modern kitchen accumulates more gadgets than the rest of the house combined. From professional-quality juicers to designer enameled mixers to dinosaur-shaped egg timers, your food prep area is likely to contain the widest array of gizmos this side of a Sharper Image catalog. But they all surround a single focal point: the refrigerator, that marvelous, ubiquitous monolith into which we peak and peer, as often for sustenance as for nothing at all.

Like Kubrick’s famous australopithecines, we crouch before it. Unlike 2001’s onyx monument, the Frigidaire FGHF2366PF is no great enigma. It’s just a very nice fridge with some well-designed convenience features, a decent enough capacity, and, with a $2899 retail price, a price tag that doesn’t overshadow its humble utility.

You’d be hard-pressed to pick the French-doored Frigidaire out of a lineup alongside its similarly designed competitors. Most share an identical configuration of two symmetrically sized doors occupying the top two thirds of a stainless-steel face, with a sliding freezer door at the base. The FGHF2366PF also contains the relatively common “through-the-door” ice and filtered-water dispenser, which offers the classic options of crushed or cubed ice and chilled water. The dispenser’s accompanying light can be toggled on or off but does not feature any sort of automatic “night light” mode.

You’ll have no trouble fitting your pizza-party leftovers in the Frigidaire’s modest confines.

Topping the water dispenser is the refrigerator’s touch-sensitive interface, which consists of 11 capacitive control keys, a segmented LCD for temperature readout, and a series of LED signal indicators that provide efficient and legible feedback. There is neither an LCD touchscreen nor Wi-Fi connectivity; however, unless you are replacing a unit that already touted these features, you’re unlikely to miss them.

It’s fairly stocky, coming in at 36 inches wide by 70 inches tall, with a depth of 28 ½ inches. (It’s 31 inches if you measure out to the handles.) The surrounding cabinet is dark grey to blend with the door’s stainless steel, and the doors themselves curve out in a soft arc. Its counter-depth dimensions mean that it should form an ideal fit with your surrounding cabinetry.

External build quality is excellent overall. The heavy doors swing open gracefully and close with a satisfying seal. The freezer drawer is weighty but slides evenly. The one slight lapse in fit and finish is the coaster-like tray at the base of the dispenser, which does feel somewhat loose and tends to shift with very little effort. The stainless-steel surfaces boast Frigidaire’s Smudge-Proof coating, which does an excellent job of keeping that handsome finish free of bothersome fingerprints.

Though its 22-cubic-foot capacity comes in at the lower end of its competition (LG’s and Samsung’s comparably priced models sport 27.6 and 28.1 cubic feet, respectively), you wouldn’t think it to glance inside. The primary “fresh food section” seems voluminous and is easily organizable. You’ll have no trouble fitting your pizza-party leftovers in the Frigidaire’s modest confines. The whole interior is evenly and invitingly lit and offers three different levels of brightness.

There are six “spill-proof” glass shelves, the top four of which hang via cantilever hooks and are adjustable to accommodate any irregular-sized groceries. The center two shelves even slide outward to offer easier access to the fridge’s deeper contents. The top two shelves each operate differently, with the left one tipping up 90 degrees and the right one sliding halfway inward to accommodate taller items stored below. The two interior crisper drawers each take up half of the interior width, are sturdy, draw out easily, and don’t wobble when they’re fully open. They also each sport their own humidity adjusters, which themselves toggle and slide without the barest squeak. Underneath the crispers, at the interior’s lowest edge, is a full-width deli drawer.

The icemaker occupies the interior’s upper leftmost corner, and the ice storage bucket slides out with the aid of a front-situated handle. It’s an intuitive enough configuration, but the front-facing handle combined with the bucket’s deep configuration requires the user to support the bucket from the bottom or risk spilling its contents.

The right door contains four bins, the top of which has a clear, raise-able shield for dairy or eggs. The lower three bins are each deep enough to hold a two-gallon container of milk, are easily removable and adjustable, and replace with a pleasant and decisive “snap.” The left door holds the ice dispenser, so storage space is a bit more limited, but it still makes room for three more conservatively sized bins.

The main freezer is bisected with a simple plastic divider that slides easily back and forth, so that the compartment can be organized into sections. At the top of the drawer rests a full-width sliding basket that offers even more storage and is itself deceptively deep.

The air and water filters are both internal. The water filter is a cylindrical capsule, about the size of a normal water bottle, and it slides into a compartment in the upper rightmost corner. It releases by firmly pressing inward against its exposed end, causing it to pop out so that a replacement can be slid in. The process is, frankly, pretty cool — not unlike loading a torpedo. The air filter is a bit more modest but is accessibly located on the right door, just underneath the dairy compartment. You probably won’t have to remove any of the fridge’s contents to replace either of the filters.

A bright and pleasant panel

The 11 capacitive touch keys are large, well marked, and responsive. The three keys to the left of the display allow for rapid navigation of the Frigidaire’s menu, and the three on the right allow for adjustment to the many control and temperature options. The five beneath the display control the input lock, ice and water dispenser options, and the dispenser light.

The heavy doors swing open gracefully and close with a satisfying seal.

The child lock is intuitive and accessible and should limit the frustrations experienced when the kiddos might accidentally manipulate the unit’s settings. Finally, the crushed, cubed, water, and light options are all exactly where they should be — right over the dispenser.

The FGHF2366PF works exactly as it should, efficiently and evenly chilling and preserving the contents within its refrigerator compartment and keeping the contents of the freezer well preserved with no detectable frost.

The fridge comes with an icemaker, but not an ice-ball maker

The “quick freeze” function is designed to hasten the freezing of the contents of the freezer compartment more quickly than the normal setting but can also increase the production of ice in the freezer itself. Frigidaire suggests employing this feature to maintain the temperature of the contents already occupying the freezer when new items are added. We did notice a fairly consistent drop in temperature when we tested the feature by placing one cup of water in the lower freezer bin. Without quick freeze, the water froze in about one hour, 25 minutes; with quick freeze, that time shortened to a little less than an hour.

The compressor operates very quietly, but the icemaker can cause the odd bit of ruckus, especially if its storage has recently been emptied. Since the ice dispenser is fed from the icemaker in the fridge’s main compartment, the dispenser cancels operation whenever the left-hand door is open; however, it does not cease flow to the water dispenser.

It carries Energy Star and CSA certifications and has an estimated annual energy use of 662 kilowatt-hours. Enervee.com claims that its energy savings is exactly average for all current refrigerator models.

The manufacturer offers a one-year, parts-and-labor warranty, which unfortunately does not stack up well against some competitors. GE covers any component of the sealed refrigeration system for a period of five years, and Maytag will replace a defunct compressor for up to ten years.

Frigidaire does offer its own extended warranty program, which prolongs the coverage of their product for up to three years. Sadly, the manufacturer does not make the rates for this program public.

The FGHF2366PF is unambitious in many ways. It does not feature any vaunted system networking or a newfangled showcase-style door. Its capacity isn’t as vast as its competitors or even other Frigidaire models. What it does have, though, it uses very well. Every feature available on the Frigidaire Gallery model seems carefully designed with usability and comfort in mind. If a refrigerator is doing its job well, you should very seldom have to think about it. This one offers no surprises, which is all that we could ever want.

The Frigidaire Gallery French Door Refrigerator can be found on sale at Best Buy for $1,999.99 —significantly less expensive than the suggested retail price, but the less-than-ironclad warranty may still be enough to scare you into pursuing other options, especially when there’s no shortage of similarly configured ice boxes all jockeying for that coveted spot as the centerpiece of your own gadget collection — err, kitchen.