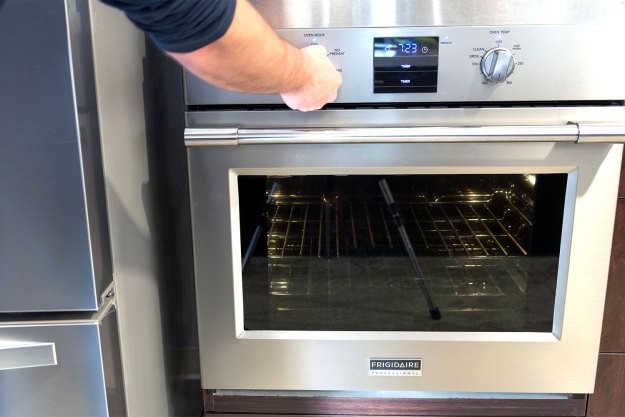 “The Frigidaire Professional wall oven does a solid job of cooking food evenly and quickly.”

When you add the word Professional to a product name, it better be a solid appliance. In the case of the Frigidaire Professional FPEW3077RF, we’re pleased to report that seems to be the case. It does a remarkable job of cooking food perfectly and has just the right amount of high-end features, including a gliding rack that’s a dream to use. Though it’s a bit on the more expensive side for a wall oven, it’s not nearly as costly as similar models from Viking and Wolf. In fact, our most notable quibble with this model is that it can be a bit loud.

The Frigidaire Professional FPEW3077RF oven is sleek and would probably feel welcome in any pro chef’s kitchen. Its stainless steel finish is attractive and fairly smudge-proof, though we did manage to leave a few hardly noticeable marks on the front panel. Admittedly, we sort of forced the issue by swiping the same area on the oven repeatedly – occasionally with greasy fingers. Open the oven door and you’ll see one of its more thoughtful features, the glide racks. A glide rack is a thing of a beauty in an oven like this that will likely be used to cook big items, such as casseroles, chickens, hams, turkeys, etc. The glide rack is a sliding mechanism on the sides of the rack that lets you pull it out with ease. Granted, the oven only comes with one of these racks, but that’s really all you need for an oven this size. Besides, the standard racks tend to slide in and out of the side levels quickly and easily.

Wall ovens have a standard width of 24-, 27-, and 30-inches. The FPEW3077RF meets the largest size requirements, measuring 30 by 25 by 28-3/8 inches (width, depth, height). If you’re not sure if the oven will fit in your space, no problem: The Frigidaire website has a handy “Will It Fit” online tool to help you figure it out. Unfortunately, the tool only seems to work with Frigidaire models.

Like many professional ovens, the Frigidaire forgoes digital controls for traditional knobs. It’s a good thing too, since the small portion that is touch-controlled is a bit buggy. To set one of the two touchscreen timers, you’ll find yourself pressing repeatedly in various areas on the screen until you hit the right spot with just the right amount of pressure. That said, the oven light control on the same panel worked flawlessly. The two knobs on either side of the clock and timer panel are for settings and temperature. The knob on the right has settings for No Preheat, Bake, Convention Bake, Convention Roast, Broil, and Clean. The other knob has temperature settings, along with options for Keep Warm (at a steady 170 degrees Fahrenheit), Broil, and Clean. Though not intuitive, the blue light that signals the oven is on is placed directly above the Off label on each nob.

The No Preheat setting got our attention.

Having the convection oven feature is a plus since it helps food cook faster. The way the system works with its fan and exhaust system surrounding the food and then venting back helps ensure the food is also cooked evenly. It’s good to use the feature for things you want to have better browning, i.e. a turkey or a chicken. On a professional oven, food should cook evenly regardless of setting, but it’s nice to have the option to speed up cooking by about 25 percent.

The Self Clean feature uses high heat to clean itself and takes quite a bit of time to run. The minimum setting for Self Clean cycle is two hours (there are also options for three and four hours) and the oven door will remain locked for an additional hour once the cycle is complete as it cools itself down. You’ll probably want to run this cycle before going to bed. Additionally, you’ll need to remove just about everything from the oven. There’s a coating on the racks to help them slide smoothly, which can erode in high heat.

During the time we had this wall oven in our test kitchen, we used it quite a bit to heat up food, cook some lunches, and to even cook a ham using the convection option. Overall, the oven performed well and cooked food evenly every time. We particularly appreciated that if we left something in the oven for a minute or two too long, we weren’t worried it would get burned or over cooked.

To test the oven, we baked a batch of chocolate chip cookies using store-bought dough to see how well it did with baking. Since these cookies really only need about 12 to 14 minutes in the oven, we couldn’t use the No Preheat option to bake them. Instead, we set the temp to 350 degrees Fahrenheit and the oven to Preheat. In our tests it took 10 minutes and 19 seconds to heat up the oven to the optimal temperature. After baking for 14 minutes, the cookies came out perfectly with an internal temperature of 225 degrees Fahrenheit.

Like many professional ovens, the Frigidaire forgoes digital controls for traditional knobs.

The No Preheat setting got our attention, especially after it took over ten minutes to preheat the oven to 350 degrees in order to bake a test batch of cookies. In this mode, you can set the oven to the preferred temperature, place the item in the oven, and start cooking. The best time to use this cooking option is when you’re making something that takes longer than 10 minutes to cook. This gives the oven plenty of time to heat the food properly. You’ll want to place the item in the middle of the third rack. We tested this feature by baking a potato for 45 minutes at 450 degrees. The potato came out perfectly, with a crunchy crust and fluffy interior — the sort you’d expect to get in a swanky steakhouse. Note: We did oil the outside of the potato before baking it in order to achieve the perfect skin. That said, plenty of other ovens don’t do such a good job making crunchy skin, even with the oil applied.

The only downfall to No Preheat is that the oven is a bit noisy during cooking. In our decibel tests, the oven produced an average of 52db of noise and peaked at 60db, which is about as loud as a normal conversation. The noise is not necessarily a deal breaker, but if you live in a smaller place with an open floor plan you might find it irritating. It took the oven over an hour to cool down, but thankfully the fan doesn’t run during that process.

The Frigidaire Professional 30-inch single electric wall oven comes with a one-year limited warranty. The company will pay all costs for repairs or replacement parts that prove to be defective under standard oven use. The clock begins ticking down on the warranty starting the day you purchased the oven.

The Frigidaire Professional wall oven lives up to its name in both looks and performance. It’s neither the cheapest nor the most expensive wall oven, but features like the No Preheat and convection make it an attractive option.

A wall oven is one of those appliances you hardly ever replace, except of course if you’re deep into a kitchen remodel. Buying one that works well and has a decent warranty is imperative. The warranty the Frigidaire model comes with is pretty standard, but the company offers an extended service option, as well. Ovens typically last 11 to 15 years; as long you take care of it and get issues fixed when they arise, this model should last you quite awhile.

The oven delivers solid performance, but can be a bit noisy at times, which could be a problem for smaller homes with an open floor plan. Still for the money, you will get some of the quality of higher-end models such as Wolf and Viking that typically sport price tags that can be out of reach. While you may not be worthy of a spot on Top Chef, the Frigidaire Professional FPEW3077RF can help you prepare meals as they should be. When it comes to cooking, sometimes that’s half the battle.