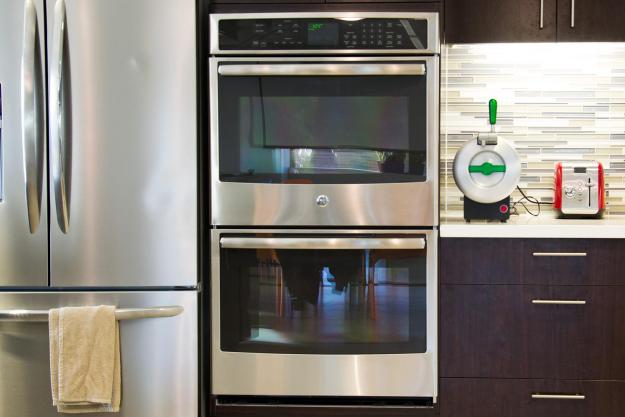 “GE's Profile Series Oven is among the best there is at what it does, and what it does is make things delicious.”

It’s impossible to see a double-wall oven without it calling to mind television cooking luminaries like Julia Child, Martha Stewart, or Alton Brown. In a televisual context, they often feel more like a prop in some vaudevillian culinary magic show, with raw ingredients inserted into the top bay and a mouthwatering, fully cooked meal removed mere moments later from the lower.

A double oven makes a more theatrical statement about its place in the kitchen than any other appliance possibly could. The space required for its installation, as well as its cost-to-utility ratio, hint at a chef’s resources, ability, and ambition. The GE Profile Series Built-In Double Convection Oven (model number PT9550SF2SS) sets a gold standard for style and performance and offers some unique and welcome features, but at $3,700, there are a few unique quirks about which you should be aware. After all, we can’t all be Julia Child.

The Profile Double Oven has a classic configuration, with a control panel above two equally sized oven bays, and an attractive look with a stainless steel doors containing large, tempered glass windows. It fits in a 30-inch-wide cabinet, and is 58 ⅝ inches tall with a depth of 27 3/16 inches.

Between the control panel and the upper bay, a strip of red light offers some interesting at-a-glance feedback, pulsing if either oven is preheating, remaining solid if in use, or filling in increments from left to right to indicate how much time has elapsed when the time is in use. It’s a pleasant way to get essential information from across the kitchen, even if it does make the oven look suspiciously like a dreaded Cylon.

The control panel is located on a black glass strip at the top of the unit and features capacitive controls with audio feedback. The hinges allow each of the significantly sized doors to be lowered with very little effort and also close again without the jerking up into an aggressive slam.

We did find that the stainless steel enclosure would not support a magnetic thermometer and had to resort instead to stationing it upon the adjacent fridge. This may not be ideal if you don’t have a magnetic surface nearby.

A surfeit of space

There’s no shortage of space in this beauty. The top and bottom ovens each offer a very impressive five cubic feet, more than most competitors. They’re both lit by three halogen lights, which gradually and pleasantly illuminate when one of the doors is opened. There’s also a ¼-inch jack in the upper left-hand corner of each oven to accommodate the included meat probes.

Between the control panel and the upper bay, a strip of red light offers some interesting, at-a-glance feedback.

Each oven offers six ladder positions on which you can place the four included standard racks or the one very neat sliding rack. The sliding rack extends and retracts on an exceptionally smooth ball-bearing track, and it removes from the rack space when you release a set of tabs on either side of the rack while pulling it out. It’s rated to hold up to 50 pounds, more than enough for most meals, and frankly, it’d be nice if another one was included so that it didn’t have to split time between the top and bottom bays. Unfortunately, it does not appear that the roller racks are currently available for individual purchase, but GE’s FAQ indicates that they were at one point. All of the racks can be left in the oven during the self-cleaning cycle.

The convection heat source actually originates from vents at the top of each oven but is then directed over the cooking surface by a fan that can be seen spinning way at the back of each bay, facilitating heat circulation. The bottom heating elements are both hidden beneath the interior chassis, which makes cleanup much more simple than a traditionally located element. You can even pour water directly on to the element housings to take advantage of the steam clean function.

The control interface is located above both of the ovens, with the LCD display separating two sub-panels, the left of which contains keys for oven and mode selection, “remote enable,” and “control lock. A 10-key numeric keypad and timer and cleaning and light options are located on the right. Each key is clearly marked on the panel’s black glass surface. The display itself is laterally split for the top and bottom ovens.

The timer and timed cook options are both very easy to use. In each case, it’s a simple matter of typing in the desired time and hitting “start.” If, while setting the time, you decide that you’d actually like to raise or lower the temperature, just max out the three-digit display and enter the new value. There are no “raise” or “lower” keys to make these adjustments manually.

The timer and cook time are also completely interdependent functions. You cannot employ them simultaneously. If you’d like to set a reminder to check your dish before the cook time has elapsed, you’ll need to do so with an auxiliary timer.

There’s no shortage of space in this beauty.

We encountered some unfortunate complications with the GE Brillion app (available for iOS and Android) before we were finally able to put it to use. The app is fairly simple; it’s designed to connect to the oven over your home’s Wi-Fi network. After you hold down the “remote enable” control for several seconds, the oven searches for your network, then the connection indicator light will flash slowly, solidifying once a connection is established. A rapid flash indicates an error during the connection process.

Upon downloading and booting the app on an iPhone running a slightly dated version of iOS, we were unable to complete user registration due to a series of user interface bugs, meaning that the app may be a non-starter if you’re still using an iPhone older than the 5. When we tested with an iPhone 6, we were able to register without issue, and then the app required us to disconnect from our home network and instead connect to the oven’s proprietary signal before again connecting to our own network.

Some users may find Brillion to be more trouble than it’s worth, but once connected, the app’s interface provided us with most of the options available on the oven’s own interface. It also sent along goofy little quips and some genuinely useful cooking information while updating the oven’s software. The oven must be reconnected to the app via the “remote enable” key prior to each use, so you’ll need to plan ahead if you want to preheat the oven on the way home from the grocery store. GE stresses that the remote enable is an intentional safety feature, so you don’t absentmindedly start preheating while you’ve still got your broiler pan stored in the oven. Still, we impressed some co-workers by being able to turn the oven on and off from across the kitchen using a smartphone.

GE’s Profile ovens do an excellent job of heating quickly and evenly. Both of the PT9550SF2SS’s ovens preheated to 350 degrees Fahrenheit in about 12 minutes and 30 seconds individually, but with both heating simultaneously, that time was abbreviated to just shy of nine minutes. A low hum can be heard during operation with any of the convection cooking settings, but it’s no more distracting than a small oscillating room fan. You can also expect the convection exhaust to produce a slight breeze of cool air that can be felt from beneath the lower door.

The “DirectAir” convection heat is emitted and circulated from the respective aforementioned vents and fan around the bakeware. It offers “True European” convection, meaning that there is an element located at the back of each oven whose heat is directed into the bay through the convection fan. It’s an ideal solution for those attempting to bake using multiple sheets simultaneously, though it does increase cooking time due to the reliance on a single forced-air element.

Using the standard, non-European convection, our test batch of cookies was baked with very even results. The entire batch — from the center out to the furthest edge — reached a consistent internal temperature of 170 degrees Fahrenheit. Using the traditional bake option, there was a 10- degree variable between the cookies in the center and at the edge of the pan.

We did encounter an unforeseen but retrospectively obvious issue with such an efficiently heating oven, in that it was still very warm — a rack temp of 140 degrees Fahrenheit — almost half an hour after use. The unit does include a cooling fan, but it can run up to an hour and a half before both ovens are back at room temperature. This might complicate some recipes that require lowering of the temperature mid-bake (cheesecakes, for example), however it’s not an issue for the PT9550SF2SS, which completely circumvents the issue with the presence of the second oven.

The steam clean function is a 30-minute cycle and is intended for use with lighter dirt and stains. The more traditional self-clean cycle can take anywhere from three to five hours.

GE covers its appliance with parts and labor for a period of one year and claims that it will offer discounts on an extended warranty if it’s purchased during the standard warranty period. This seems to be the current standard for similar appliances, with warranties from competitors Bosch, Whirlpool, Frigidaire, KitchenAid, and LG also terminating after just a single year.

Customer service was fast and courteous when we touched base regarding our Wi-Fi-connectivity issue. The GE website also has a very helpful Q&A section where customers can first check their own queries against those from other users.

Silicone Baking Mat With Measurements ($170)
Get a little OCD about your cookie size with this baking mat marked with measurements.

iDevices Kitchen Thermometer ($170)
Get a little OCD about your cookie size with this baking mat marked with measurements.

The PT9550SF2SS sits at the top of its class. It’s a stately looking performer with loads of enviable convenience features, and while its warranty is nothing to sing about, it’s also no worse than any of its competitors. Its controls may not be immediately intuitive to users more accustomed to an analog interface, but familiarity sets in quickly after a few baking sessions.

Our only major disappointment is the integration of the oven’s smart features. The Brillion app is alienating to anyone using anything by the most current hardware, and even under the best of circumstances, connecting was bit of a process. We also experienced a fair number of crashes with the app, adding to the frustration.

Still, you’d be hard pressed to find a better consumer oven in the marketplace today. Even if you don’t have the cooking chops of Alton Brown or Julia Child, GE’s Profile series is enough to make you feel like a celebrity in your own kitchen.

Update 4/13/2016: Updated to reflect information about the remote enable, which was designed as a safety feature.